Do You Know? Mike Nichols 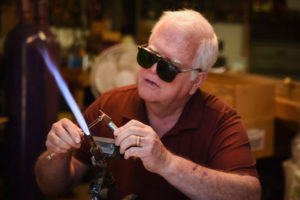 Glassblowing is a technique whereby a glassblower, also known as a gaffer, uses a blowpipe or blow tube to form molten glass into shapes. A lampworker, also known as a glassblower, forms glass shapes using a torch and glass rods and tubing, a process called flamework. The earliest evidence of glassblowing dates back to the period of the Roman Empire in the 1st century BC. Since its birth, glass has made a home for itself in society, as both utilitarian in use and as artworks of exquisite beauty. Mike Nichols of Huntsville, Texas, a self-taught lampworker, became intrigued with this craft in 1965 and can lay claim to some very beautiful creations. 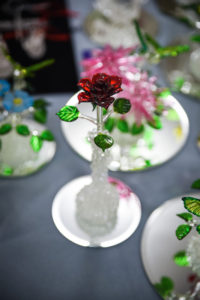 While attending the Brazoria County Fair in Angleton in 1965, I walked by a booth where a glassblower was demonstrating his craft, and my attention was immediately captured as he shaped the molten glass into beautiful forms. Soon thereafter, I went to the hardware store, bought a torch, and got some coke bottles. I experienced a quick lesson on the delicate relationship between glass and temperature change as the glass exploded, leaving a terrible mess!

Obviously, you were undaunted in your pursuit of success. Tell us a bit about the process and lessons learned. 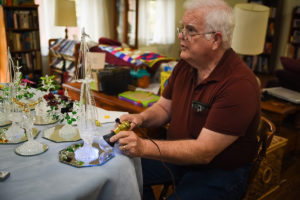 Yes, I have learned many lessons as a self-taught amateur hobbyist. The first lesson was that glass must be worked in such a way that temperature changes are slowly regulated to prevent thermal shock. Thermal shock causes stress and cracks in the glass, which can ruin the entire work. Glass is a super-cooled liquid that does not have a melting point, but a working point. I use a torch and Pyrex® tubes and rods, a process known as lampwork or more currently, flamework. The rods are held up to the flame and slowly rotated together. As the flame heats the Pyrex®, I join them and begin gently pushing and pulling the rods to form the glass into the desired shape. During this process, the glass must be kept at a relatively constant temperature to prevent cracking. The critical point where glass is at the greatest risk of stress is where a thin segment joins to a thicker segment. Keeping the temperature constant at this juncture is important. Another stress I’ve encountered is the effort involved in just holding my arms up as I work the rods in the flame. This can be quite exhausting! And as one works with white hot glass, the risk of burns is ever-present. But I love the work! 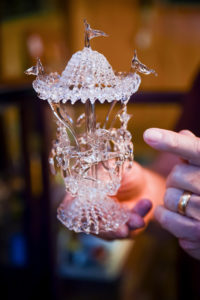 I’ve heard the term “annealing” in regard to glasswork. What is this, and why is it important?

Annealing is a very important step in glassmaking. All glass is annealed in order to remove the risk of thermal shock, whether it be a drinking glass or a piece of fine art. Annealing is the process of placing the finished glass form into an annealing oven, or kiln, at specific temperatures and for specific amounts of time, generally one hour for each ¼ inch of thickness, then slowly cooling it down. I use a digital oven which I can fire up at night and then go to bed. In the morning the glasswork has cooled down at the proper rate and is complete and ready for the finishing touches. Finishing touches may include applying translucent paint, attaching the piece to a mirror base, or as in the case of my Christmas tree ornaments, looping them through with red cord for hanging on a tree. 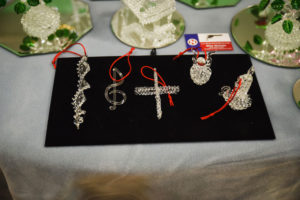 What are your favorite subjects to portray in glass?

My most popular items are Christmas tree ornaments which include angels, crosses, and icicles. These absolutely sparkle in the tree lights and are easy to ship to customers without fear of breakage. I also have many floral arrangements which sometimes include hummingbirds and butterflies. And, I have made sailing ships of several heights.

Another customer favorite is an eagle perched upon a tree. I have made several of these, some of which I have embellished with 22 carat gold. This is painted and fired onto the piece for permanency. Many of the floral pieces have also been adorned with translucent paints. Along with embellishments, I mount the larger pieces onto mirrored bases with a permanent ultraviolet glue. The base provides great stability to the piece as well as it reflects light back into the creation, adding depth, dimension, and sparkle. 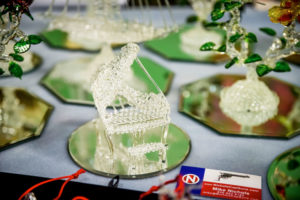 Christmas is coming and there are trees to decorate and gifts to buy. Where can our readers view and shop for your glasswork?

I will be displaying and selling my work at the 25th Annual Angel Show Holiday Market on Saturday, December 2nd, at the Katy & E. Don Walker, Sr. Education Building, 1402 19th Street in Huntsville. Also, my work is displayed on my website at www.NicholsCapGuns.com and shipping is free. There is a link to the glassware on the left-hand side of the site (the main menu). Customers may also call me at 936-662-8165 or email me at Mike@NicholsCapGuns.com. In times past, 1974-1993, we owned a pet store called The Fish Bowl here in Huntsville where I also displayed my glass creations. I sold tons of glasswork there. Unfortunately, I don’t have a storefront location now, so I depend on shows, the website, and word of mouth. 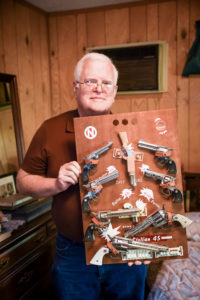 Your website is shown as Nichols Cap Guns. Do you also make and sell cap guns?

No, but that is an interesting story. From 1946 to 1949, my father Lewis and his brother Talley designed and produced three cap guns. Then they showed the “Stallion 45,” which is a replica of the Colt 45 Peacemaker, at the 1950 World Toy Fair in New York City and won the worldwide Toy of the Year Award. The orders for this toy gun were so enormous that they could not keep up with them. They did 2 ½ years of sales within 3 days, resulting in what today would be about $1.2 million in orders. In one half day alone, they sold $60,000 worth of orders of that gun in 1950 dollars. This was at a time when a house would sell for $6,000. They became instantly famous and eventually had over 600 employees working for them. I helped on the assembly line occasionally. Dad eventually quit and became a Methodist minister, a vocation shared by both granddads, two uncles, and two cousins.

What other hobbies and skills do you enjoy?

In the past, I have built and flown radio-controlled model airplanes. One of these could fly at 100 miles per hour. I loved taking it down a runway doing 4-point rolls, faster than a few old planes could take off. 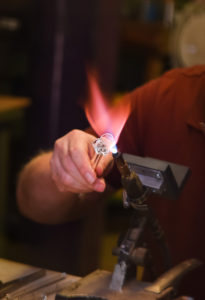 I have also enjoyed playing guitar and own a candy apple red 1964 Fender Jaguar guitar. My main musical passion is bringing a piano’s keys to life! I took lessons, but found that being dyslexic and having Attention Deficit Disorder made it extremely difficult to learn to read music. So, just as with my glasswork, I am mostly self-taught on the piano. Pieces that I enjoy playing are Malagueña, Moonlight Sonata, some Polonaises, popular music and other works of Chopin. I recorded a CD in 2015, Piano Music for Easy Listening, which contains 16 songs including “Moonlight Sonata, 1st Movement,” by Beethoven, “Nocturne No. 9 in E Flat” by Chopin, “Liebestraum” by Liszt, an arrangement of mine of “Yesterday” by Paul McCartney and other arrangements of mine called “Duos.”