Do You Know? Larry Foerster 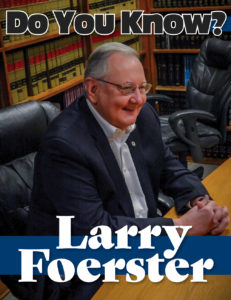 Area residents often phone Larry Foerster, a Conroe attorney, about matters that have nothing to do with law. Sometimes they question him about puzzling matters of local history; often they provide historical tidbits, photographs, and artifacts. Larry, a sixth-generation Texan, holds a bachelor’s degree in history from Texas Tech University, but he earned his local notoriety because of his diligent research. For more than three years, he examined countless historical documents and meticulously combed old newspaper microfilm. He ultimately wrote Montgomery County, Texas Historical Timeline, which was published in 2014. It traces Montgomery County’s origins chronologically from the time of Native Americans until 2013. 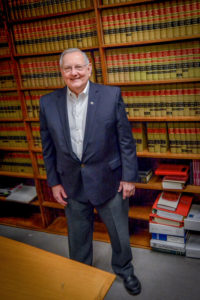 It’s remarkable that Larry has time to take phone calls. Formerly a member of the U.S. Air Force Judge Advocate Corps, an assistant district attorney and elected county attorney, he is now a partner in the Conroe law firm of Darden, Fowler & Creighton, where he has practiced civil law for more than 33 years. He is the city attorney for seven nearby cities—including Willis, Montgomery, and New Waverly—and represents emergency services districts, water supply corporations, and municipal utility districts. He also volunteers his services to several churches and non-profit organizations. He is active in local organizations, such as the City of Conroe Tourism Council, Friends of the Flag Foundation, and the Conroe/Lake Conroe Chamber of Commerce. As a member of Conroe Live, he was instrumental in bringing the History Village to the annual Conroe KidzFest. Larry also leads an adult Bible study at Conroe Bible Church. He and Martha, his wife of 36 years, are the proud adoptive parents of two adult children, Emily and Daniel, and are active members of Montgomery County Right to Life, which champions life from conception to natural death.

Larry continues to investigate the history of Montgomery County, and is now working on the second edition of his book, as well as a self-guided tour of downtown Conroe. He knows, perhaps as well as anyone, how the past has shaped our community. 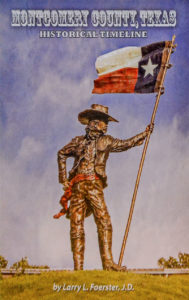 My mother’s great-great grandfather migrated to Texas in 1854 and was the first Lutheran pastor in Texas, leading immigrants called the Wends of Texas. They were a German-Slavic group who came to Texas because of religious oppression. My mother loved her family history. I guess I picked up on her passion for history.

I was a post-war baby, born in Houston in 1948. My dad worked for Humble Oil and Refining Company, and we moved frequently throughout Texas. We settled in Baytown when I was in the sixth grade; I graduated from Robert E. Lee High School in 1967. I went one year to Lee College in Baytown and transferred to Texas Tech, where both of my parents had graduated. I decided to get a degree in history and political science, with plans to be a history professor.

What changed your mind?

My junior year at Tech, my history professor took an interest in me. I told her I would like to get a master’s and Ph.D. in history. She said, “I will help you, but there are 2,000 Ph.D. candidates who can’t find jobs teaching at colleges right now.” I thought about that during the summer, and by the end of the summer, I decided I’d better go to law school.

I completed my history degree in 1971. I had a low draft number during the Vietnam War, so I joined Air Force ROTC at the end of my senior year. I went to ROTC summer camp, and when I enrolled at U.T. Law School in August 1971, I also enrolled in the ROTC program. I consider that my “Vietnam War years.” I walked across the campus in uniform two days a week with anti-war students yelling obscenities at me. In July 1974, I entered the Air Force Judge Advocate Corps.

How did you end up in Conroe?

I got out of the service in January 1978 and learned there was as an opening for assistant district attorney in Conroe. Conroe had about 10,000 people at the time. I didn’t know anything about Conroe, except I had been to Camp Strake as a Boy Scout. Two years later, several people suggested I run for county attorney. I got elected, but after serving four years, I decided not to run for re-election. On January 1, 1985, I joined Darden, Fowler & Creighton. By that time, I was married to Martha, and we liked Conroe. It was small, it was growing, and we had made friends here. I think it is still a great place to live. 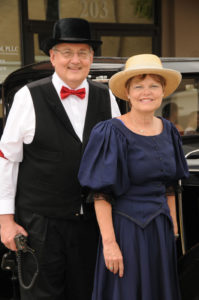 Larry and his wife Martha at History Village

I had always been fascinated by the old buildings in downtown Conroe on the east side of the square and on Simonton, built in 1911 and 1912. I had heard about the Conroe fire of 1911. I started interviewing some of the old-timers, and heard stories about L.B.J., Elvis Presley, and Bonnie and Clyde coming to Conroe. I said, “Why don’t we have a 100th birthday party for downtown Conroe?” We had people coming out in turn-of-the-century clothing with period music and entertainment and antique vehicles.

About the same time, I ran across a thesis by William Harley Gandy for his master’s history degree in 1952. When I prepare for a trial, I do a timeline. What happened first, what happened next, hour by hour, day by day, to develop a narrative for the jury and the judge. I started doing that for the towns of Montgomery and Conroe. County Judge Sadler saw it and said, “This is interesting. When you’re finished, the Commissioner’s Court would like to publish it.” Over the next few years, I went to the county library and examined, page by page, old issues of Conroe Courier. Before 1911, the Courier was located downtown, but it was destroyed by the fire. From 1911 forward, there was microfilm at the county library and in the Courier archives. I started chronologically organizing the history of Montgomery County. 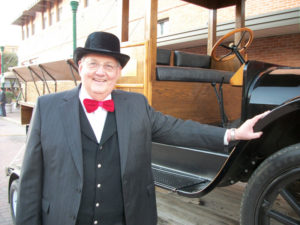 I knew I could keep going, but by the fall of 2013, I felt I had enough. By this time, I was chairman of the Historical Commission and decided this would be a good fundraiser. In January 2014, we published the book in hardback and paperback. We sell them around the county, and all proceeds go to the Historical Commission programs. I am pleased that people who have lived here their entire lives—and also new people—enjoy it. They look for sites that are referenced in the book. Sometimes they report to me things I didn’t know, and I make a note of them.

There are so many stories, like a buffalo soldier buried in Conroe or the story of George B. Madeley, who shipped wine from his home near FM 1488 to his brother in England in the late 1870s. I believe he may have been the first exporter of Texas wine.

Then there’s Richard Williams, a Georgia man who came to Texas in 1834. He meets and marries Mary Miller, and then goes off to fight for Texas independence. He’s wounded in late 1835 at one of the skirmishes that led to the battle of the Alamo. He settles east of Willis in the late 1830s and has at least 10 children, one named Sam Houston Williams and a daughter named Jacinto Williams. In 1842, he serves as a captain of volunteers defending the Republic of Texas from the invading Mexican army. The Richard Williams Cemetery is on private land, and I believe Jacinto Williams’s 1842 tombstone to be the oldest legible tombstone in Montgomery County.

You’ve been recognized by the Daughters of the American Revolution, the Texas State Bar Foundation, and the local Chamber of Commerce, among others. What award are you most proud of?

I’m probably proudest of my most recent recognition, the Chamber of Commerce Wall of Honor. It’s a local award, where I have been honored with a group of distinguished community leaders who have served Conroe and the chamber for many years. It comes from my peers. They know me from the chamber, from my law practice, and from various community activities. You can’t blow smoke with them, because they know who you really are. That was a very meaningful award for me.

What are some of your goals for the future?

I am trying to bring special recognition to old historic structures in both the commercial downtown area and the residential areas that encircle downtown Conroe. My goal is for the city to develop historical preservation districts to preserve the structures for future generations and to attract more tourists. They have a lot of value. When people learn about the buildings, they don’t want them torn down. For example, the Shepard Barber Shop was rebuilt in 1911. We are confident it is the oldest operating barber shop in the state of Texas. We believe Elvis Presley got his hair cut there in 1955 when he was performing with the Louisiana Hayride at the old Conroe football field. History—the history of God’s creation, the history of every locale—is all about people. Without people and their human challenges, there is no history.

What is your life goal?

I want people to say, “He made a difference.” I want my life to count for something, because it glorifies my Lord.