Do You Know? Kevin Edney 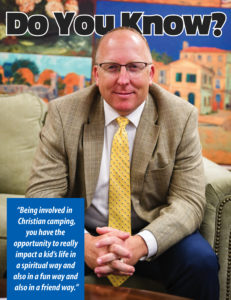 When Kevin Edney resurrected the tradition of an outdoor Easter sunrise service at Elkins Lake last year, it shouldn’t have surprised anyone. The soft-spoken financial advisor has spent much of his life blending ministry with his love for people – especially kids – and the outdoors. Here in the piney woods around Huntsville, he has found multiple avenues for putting his passions to work in the community.

How long have you been in Huntsville, and what brought you here?

We moved here in August of 2005 from Marble Falls. What brought us here is a non-profit Christian camp outside of town – Forest Glen – where I was hired to be the outdoor education director.

Tell me about your background in ministry.

Just prior to Forest Glen, I was at another camp, Balcones Springs, working as a guest services manager. Before that, I was at a church serving as a youth pastor. My wife and I left church ministry because, during our time there, we were doing a lot of camps for the kids; then, one day we just basically looked at each other and said, “We are spending a lot of our time planning camps—why don’t we go back into camp ministry?” I say “back” into camp ministry, because both she and I worked at camps when we were in college—she as a director of the girls’ side of camp, and me as a counselor and in leadership, so we had some passion and motivation for that. So, we went back into camp ministry after we had spent about three years in church ministry. 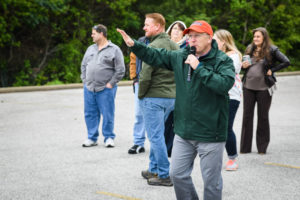 What drew you into camp ministry to begin with?

Well, specifically, the experiences I had as a college kid. I would go off to camp for the summer, where I would serve and lead kids in that outdoor recreation space. It was all about kids being out of their norm and getting away from home, away from TVs and phones. You’re putting them into an environment where it’s not normal. And maybe there’s an interest there in sports or different types of recreation, but you have the ability to really connect with kids, mentor them and see them grow, and lead them in that growth.

So that’s what my wife Anitra and I enjoyed when we were in college, being a part of that. As a family, we knew that’s where we had a developed skillset that other people wanted, because we could think through those camps and help program them. That’s why I made it the first part of my career. 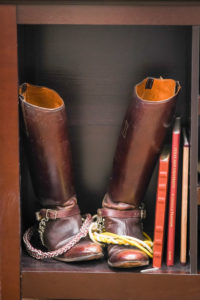 Being involved in Christian camping, you have the opportunity to really impact a kid’s life in a spiritual way and also in a fun way and also in a friend way. I mean, great friendships are built there. It’s a very spiritually nurturing environment, and it’s a whole lot of fun, and so for at least a week—maybe two or three weeks—that kid gets one of the best trips of their life in a safe, Christian environment.

How long were you at Forest Glen, and how did your role change over time?

I was there from 2005 to early 2015. I grew in my responsibilities there and became the director of all the programs we did. I was on the senior leadership team, which included a lot of different responsibilities. I led the advancement team, but that was more marketing, development, and overall camp management. I worked directly for the executive director, but there were others on the senior leadership team as well.

You’ve said that working at a Christian camp is good preparation for business and community leadership. How?

Working in Christian camp in the role I did definitely scratched the leadership itch for me. There, you can develop an idea, take the idea from a group meeting to fleshing it out, and then see it work itself out during the summer while other people are buying in and also working out that vision. It’s an environment where you’re not just throwing on a suit and tie and going to work on an assembly line of some industry. You actually get to see an idea from the beginning phases all the way through the end, to where you’re reviewing how it went, and what adjustments do you need to make for next year.

What motivated you to stay in Christian camping for so many years?

That’s easy—kids with huge, huge smiles on their faces loving what happens for their week during the summer. I can’t separate that part of it. There is something about knowing hundreds of kids who are participating in the camp—not only as campers, but 100 or so counselors who you’ve recruited from universities to come in and be a part of that same vision—I mean, it’s just a whole town in and of itself. And those college students, they come in, and they may only spend a summer with us, but for that summer, they get a lot of experience in serving others; and not only serving others, but leading them in extraordinary fun and outdoor activities. It was a real pleasure to be a part of that process. 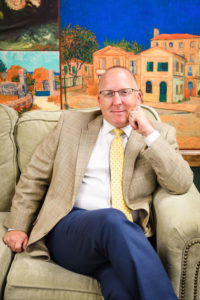 What made you decide to make a career shift from Christian camps to financial management?

Interestingly, the recession of 2008-2009, being with a non-profit organization, we felt that pull-back in finances. Going through that, I began thinking that our non-profit, going forward, would perhaps need more business savvy to remain sustainable. So I went back to school to get an MBA at Sam Houston State University. At that point, I began thinking about what it looked like outside of non-profit management and Christian camping. Going through that program opened my eyes a bit.

I began to realize that I could have more of an impact on families and people in Huntsville, in this position (financial management) than what I was doing in camping. I had gotten to the level of working more on the administrative side, and my working one-on-one with parents was limited. In the job I have now, I am back working with people. I am sitting down one-on-one with people, discussing the bigger pictures of life, because I have to find out what’s important to them, as it impacts how things are going to be managed when it comes to their assets.

I was moving up in the camping world, and was president of the Christian Camping Conference Association for Texas. My next step was to become an executive director, and most likely that would have happened if I had been willing to move somewhere else. That was a big factor in me going back to school for an MBA. Since we had been so involved in this community, I wanted to see if there was a way for us to stay here in Huntsville. There were opportunities for me to go on to executive-level positions in camping. It would have involved moving my family, though, and that’s not something I wanted to do.

Now that you’re in financial planning, how are you using your love for kids and the outdoors in the Huntsville community?

I am on the Parks & Recreation Advisory Board, which I was asked to be on because of my involvement with various youth sports my kids were in, like baseball, soccer, and swimming. Prior to joining the board of Elkins Lake Recreation Corporation, I was president of the Elkins Lake Community Association, which provides activities and events that enhance the socialization of the community. I have four children and am involved with them and their activities. My wife and I are also very involved in our church, University Heights Baptist. We both teach in the children’s department. 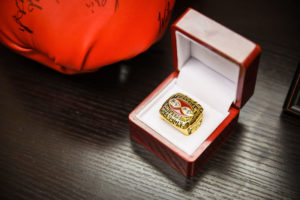 Speaking of kids, you are also on the board of directors for Boys & Girls Club of Walker County, right?

Yes, that’s a relatively new position for me. I’ve been on the board for about a year. It was of interest for a couple of reasons, one of which is that it fits right in with my history as camp counselor in college. I worked for a camp in Missouri called Kids Across America, which was a non-profit camp specifically for kids from urban areas—what we used to call inner city areas—like east St. Louis, New Orleans, south side Chicago, etc. I was working with kids who, when they prayed, thanked God for the shoes on their feet; they really meant that, because shoes on their feet wasn’t something to be taken for granted.

I was attracted to the Boys & Girls Club because it serves kids who would normally be in neighborhoods after school without a lot of supervision or oversight, except for other neighborhood kids. It provides a place for them to go after school every day and get free tutoring, but more importantly, get activities and supervision and a place to gather in a safe and healthy environment.

That’s very similar to what we provided as a camp, specifically for families who may not have the resources to provide the supervision and activities that other families could provide. So as a community or a non-profit steps into that role, those kids, instead of going to a neighborhood, largely unsupervised, now they are in an area where there are a lot of resources available to them…and for a very low membership fee to their families, which is subsidized by givers and donors. There’s a huge impact, not only on their day, but hopefully to their overall life.

Thanks for your time, Kevin Edney…and for reminding us through example of the importance of investing (especially in young people) for the future.