Do You Know? Ken Manthei

With the advent of the computer and digital age, signs have become mass-produced. Over the past 30 years, the sign painting trade has been displaced by technology. However, with mass-production comes mass sameness. Fonts designed to resemble hand-painted lettering were never the same. Businesses with a desire to stand out began to seek out traditional hand-painted signs.

One of the leaders in this revival of sorts is Ken Manthei (pronounced man-tie). His passion has culminated into more requests for his work than he can shake a brush at. The demand for his old-fashioned art and skill has taken Manthei all over the state of Texas—from the legendary Dixie Chicken in College Station to Roadhouse Relics in Austin to the famous Goode Company restaurants of Houston, not to mention the popular McKenzie’s Barbeque and Mr. Hamburger in Huntsville. All have profited from the quality of Manthei’s handcrafted authentic work of art.

First and foremost, you believe a sign painter is an artist. When did you realize you had a talent for the craft, and why did you choose art?

There was never a time I thought I had a talent for art. But it was something that I practiced a lot over a number of years and became good at it. When I was maybe 12 or 13 years old, I discovered that I enjoyed this more than the average person. I was just having fun. Later it was more of a showoff thing. Like hey, look what I did.

What did you draw in the beginning?

I drew a lot of airplanes, army tanks, and war stuff. You know, I was a kid. World War II was fairly recent, and many of the nation’s fathers served or were veterans. It was a big deal back then, and still is today to some extent. I loved to draw caricatures and comic strips, too. I still have a few brushes from the World War II era that were used at one time to hand paint fighter bomber nose art.

Even though I became really good at drawing at an early age, I thought lettering wouldn’t be a problem. I thought, “It’s only lettering, and anybody can do that.” Well, it turned out the answer to that was a resounding “no.” When I apprenticed under some of the old sign painters like Floyd Kiker, John Scoggeins, or Wilber Hawkins, I started to think that I couldn’t do this at all. But I’d practice for hours, sometimes days, even months.

Where did you receive your formal artistic training?

I was formally instructed at Sam Houston State University, Class of 1979. I thought after graduation I’d do fine art painting or illustrations, which I did. Around 20 years ago, I discovered sign painting was my art.

What other types of art did you create?

At one time, I did political cartoons. That was back during the first Bush administration,George W. Bush. I did it from 1998 until 2002 for the Bryan Eagle newspaper. That was tremendously fun. Mostly with political cartoons, I learned to draw caricatures of the president and some other major politicians in goofy situations. A lot of the times, things have a way of being oversimplified in a lot of cases. It’s like the old story of the emperor who has no clothes. But that happens in politics all the time. They complicate things.

Do you think you will ever do them again?

If the chance ever came up, yes I would. There is someone I know in Bryan who has run for some local offices. He has asked me draw some things. They were never published. But he would take them to Austin and show them to different people.

Well, a number of skills transfer well. Things like coloring, layout, design, and balancing. Unfortunately, I didn’t learn anything about sign painting or lettering in college. But I received a firm foundation in design principles, and those transfer everywhere.

I began to marvel at the skill of the old sign painters. Their work was beautiful. They embodied everything I’d learned from college. They used lots of colors and shadows and outlines. I knew it was great, and I thought it was really cool. When you look at movie titles in the old days, they were all done, not by a conventional artist, but sign painters. You can be very creative with lettering.

Is that why your art invokes different eras and moments in time?

Oh yes! I specialize in retro or vintage signs. A lot of businesses, especially restaurants, like it. I think because it gives the customers a better feeling. It provides, in some way, a sense of security. It puts them in the mindset of the good old days, so to speak.

So, you’re saying it’s like the power of suggestion?

Oh, yeah! Businesses want customers to come in and buy their product. For example, barbeque taste good and will sell on its own. But, if you can have the customer believe one place does it better, that’s who they’ll spend with. 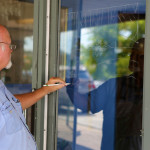 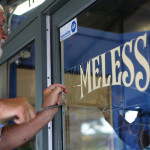 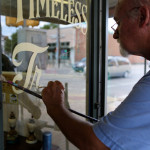 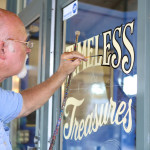 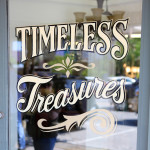 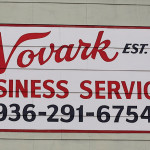 How do you come up with a particular style of sign for a business?

Sometimes they already have a design in mind. In that case, I just reproduce it. But most of the time, they may not know exactly what they need, and that’s where I come in. I ask myself, “What is the main purpose for their sign?” It’s to attract attention and inform the people about what the business is—and that’s different for every business. For example, I wouldn’t use the same type of lettering for a funeral parlor as I’d use for a nice restaurant or a church. 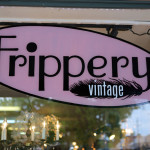 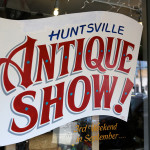 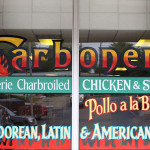 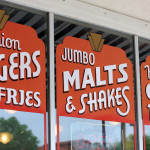 Over the last 30 years, the talent pool of sign painters has dried up. Have you ever considered being a teacher?

I received a teaching certificate from Sam Houston State University back in 1998. I taught for the Texas Youth Commission for five years. I even taught them some sign painting, too. There may be some that may actually earn a living sign painting.

What did you enjoy about teaching?

Do you have any children?

I have two sons—Allen and Jeffery—and three daughters—Marissa, Chelsea, and Jane. My youngest, Jane, is my apprentice.

Were you surprised she took up the art?

No, not at all. She has this ability to concentrate really well. I believe she really has talent. I had to work hard, but she works hard and has talent.

Why do you say that?

She has this ability to reproduce photographs—in particular, her series of rock and roll artists and her drawings of the Beatles. I’ve taught her things, but she really has talent. She is great at lettering, too. She’s still learning, and I still have a lot to teach her. Lettering, in a lot of ways, is a lot harder than drawing.

You’ve been married to your lovely wife Frances for more than 20 years. How did she affect your art?

Wow, where do I begin? I’m not saying I’d be a homeless street person, but close. It was like night and day after I married her. I felt I was good, but had my doubts about myself. She’s always been my biggest supporter, critic, and everything. She’s a smart lady. She’s kept me organized. I can’t begin to tell you how much she’s meant to me. 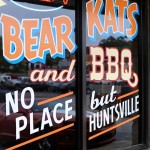 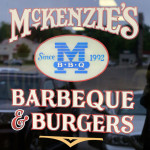 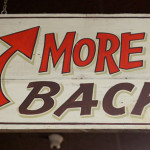 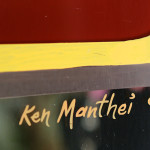 Watching Ken work is fascinating. He now paints primarily on the outside of the glass.  He used to paint on the inside, because it is more protected and lasts longer.  Now, most glass is tinted (even if you can’t see it with the naked eye), and it changes the look of the colors.

Some things he does both inside and outside, and some techniques—like on the sign for A Nitsch in Time—make it look 3D. He uses just soup and veggie cans as his working containers —nothing fancy.   He stores his brushes in a tin with a little motor oil to keep the bristles flexible. He’s a lefty, so he works from right to left. Ken enjoys the painting—he doesn’t listen to music, but sometimes people stop and chat with him while he’s working.  You get the feeling this artist gets a lot of satisfaction seeing his work all over town.  So do we, Ken.