Do You Know? Jeanine Dooley 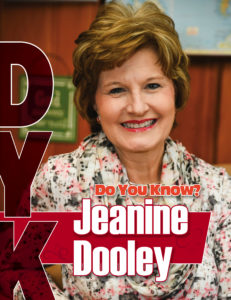 Meet Jeanine Dooley, a woman whose life, through tragedy, through tenacity, through triumph, and through the touch of God’s mighty grace, testifies to His power, provision and peace each and every day.

Jeanine, tell us about your early years and your education.

I was born in Temple, Texas, and grew up in Houston with my parents and 3 brothers. My father was a chaplain at the VA Hospital, and my mom was a stay-at-home mom most of the years we lived there, except for a few when she worked as an RN in the Houston Medical Center. I attended my first year of college at Baylor University, and continued my education at Houston Baptist University, where I earned degrees in Elementary Education and Bilingual ESL.

As a teacher, where did you spend your career years?

I taught in Galena Park and La Porte. After getting married, my husband and I moved to Huntsville. I taught a year in Cut and Shoot, and then spent the next 12 years teaching kindergarten, then 3rd and 5th grade bilingual at Stewart Elementary School. My next move was to Mance Park Middle School, where I taught English ESL (English as a Second Language) in the 7th and 8th grades. During my time there, I served as one of the sponsors of Teens for Christ. I was so grateful to be teaching in a school district that was supportive of students having a Christian organization on campus. We met before the start of school one day each week, and it was always well-attended.

You have gone through not one, but several heart-wrenching experiences in your life.

Yes, but first I must mention my wonderful husband, Steve Dooley, SHSU graduate and avid Dallas Cowboy fan. We met in Houston, then moved to Huntsville where he taught in the Texas Department of Criminal Justice. We found a wonderful church home at University Heights Baptist Church, and before long were blessed with two children, Jordan and Candy. Shortly after arriving back home from a summer visit with family in Oklahoma, both children became ill. Over the next few weeks and many trips to the doctor, both children remained ill with no improvement in sight. Candy died first at the age of 5 months, and within two weeks, we lost Jordan at age two. We were devastated. No words could express the grief that ran through us, as well as our families and friends. 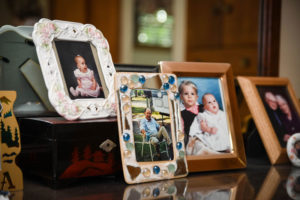 After genetic counseling and testing, the doctors could find no reason for the death of either child. They said there was no evidence to suggest that our next child would suffer the same fate, but felt that a healthy life could be expected. A year later, almost to the date of Jordan’s and Candy’s deaths, I gave birth to Krystal. She was a happy and healthy little girl and brought us so much joy. At the age of 8 months, she became ill. We were convinced that this was a normal childhood sickness from which she would recover. But, within a few short weeks, and while a patient at Texas Children’s Hospital, she died.

We were almost inconsolable. Once again, the strong support from our family, church friends, and the entire community was tremendous. But even that would not have been enough to help us get to the other side of grief, to a place of healing, if it had not been for the faith that Steve and I had in a God who is powerful enough to handle any situation, big or small.

As a couple, Steve and I trusted God not only during the good times when all was going great, but we trusted that He had a plan even in the difficult seasons of life. Together, we promised God that if given the chance, we would always tell our story of how His love brought us through losing three children. God gave each of us opportunities to speak in churches and public gatherings. Speaking provided an avenue of healing for both of us. Several years after the children died, I started a Support Group for mothers who had lost children. That gave me an opportunity to minister to others and to return the great support I had been given. Though the group no longer meets, our church provides me with books to give to parents who have lost children, and I am able to have some one-on-one time with them. 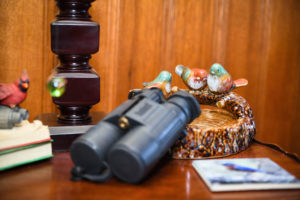 After Krystal’s death, an autopsy, and further testing, it was determined that an immune deficiency existed. At that time, thirty years ago, this was not a concern that would have been automatically recognized. Steve and I knew that the doctors did all they could for our children. We were always appreciative of their care and expertise during those difficult days. When I would become sad over our losses, Steve would remind me that our time here on earth is so very short compared to the time we will spend in eternity with Jesus and our children.

Steve and I had 22 more wonderful years together until he died from pneumonia at the age of 60. Once again, I found myself in a place of grief beyond words. The death of a soulmate that you have been with for 30 years is extremely painful. But the same God was there to give support and love to me as I learned to manage a home and make decisions by myself. Many loving friends came to my rescue as well, and literally walked with me through those first few months of being a widow.

As an overcomer, you learn through tough experiences and use that knowledge and wisdom for the future. What good has unfolded from your past heartaches?

I am a firm believer in God and His Word. In Romans 8:28, the Apostle Paul states, “And we know that for those who love God all things work together for good for those who are called according to His purpose.” I have lost my three children and Steve, and I know we will be reunited one day in Heaven. But as I remain here, God has filled my life with what I call my “spiritual blessings.” These are very special people that the Lord has brought into my life to fill the gap, in addition to many other dear friends. In fact, I’ve had a friend make some photo displays that showcase pictures of these “spiritual blessings,” and I use these as I give talks to various community groups. I recently spoke to the Huntsville Christian Women’s Connection and shared how God has used these “blessings” in my life. 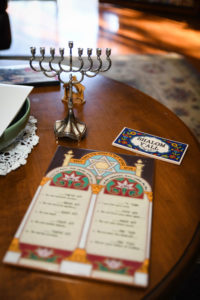 Presently, I am involved in a mentoring ministry at UHBC which is based on Titus 2:3-5. In this scripture, older women are commanded to share with younger women how to live their lives in accordance with scripture. I have had the chance to have many “spiritual daughters” through this and other ministry programs. I have learned that you can be a “mom” to young people other than your own physical children.

Are you involved with other ministry organizations?

I took a trip to Israel and, upon returning, decided to get involved in mission work for Jews. I grew up with Jewish neighbors and have always had a love for the Jewish people. As a result, I became a volunteer with Chosen People Ministries, a New York-based ministry made up primarily of Messianic Jews. Messianic Jews are Jews who have accepted Jesus Christ as their Savior and Lord. The foundational Old Testament passage for their ministry is Isaiah 53, which prophecies the coming of the Messiah, pointing directly to Jesus Christ. A missionary from CPM has come to Huntsville several times to hold the Passover meal and to talk about the Middle East. It has been thrilling to be involved in God’s work in this way. 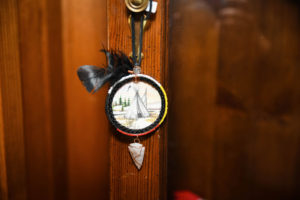 No mention of my missionary endeavors would be complete without telling of my week in a teepee in Montana! In fact, I helped erect the teepee, no easy task! This was at the Crow Reservation in Montana during a large fair they hold each year. We spent the week meeting with those living on the reservation, interacting with all the children, handing out bottled water, and sharing the gospel.

You are one busy lady! Do you have time for other interests and hobbies?

Over the past 8 years I have enjoyed traveling with friends, including three trips to Israel and a Holocaust Tour to Germany and Poland. 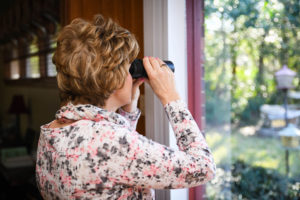 As far as another hobby, I would have to say that birdwatching is it! My mother collected bird figurines, so I was intrigued with birds at a very young age. And Steve’s mother introduced me to the delightful hobby of birdwatching. My backyard is a bird’s paradise, with birdbaths and birdfeeders at every turn. The most beautiful bird I have seen in my backyard is the Painted Bunting. And the most unusual event I have seen is a Baltimore Oriole trying to get nectar out of the hummingbird feeder. Due to the difference in the shape of his beak, he didn’t accomplish much.

In like manner, going through life without a personal relationship with God may bring some success, but not with the full richness or the eternal life that He gives. My advice to everyone is to let God’s glory be the motivation and driving force behind everything you do. Honoring and revering God has brought an indescribable peace to me.