Do You Know? Glenn Wilson 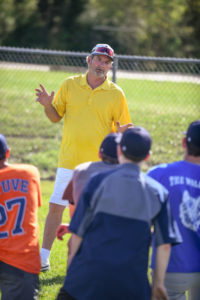 Glenn Wilson is a former Major League Baseball player who went to college at Sam Houston State University. He played ten seasons in the MLB and was an All-Star in 1985. He also led the MLB in assists as a right fielder in 1985, 1987, and 1989. This year, he decided to take his talents back to Huntsville to coach the high school baseball team of Alpha Omega Academy Lions.

Tell us about your early life and how you were introduced to baseball.

I was the baby of three boys, and our father passed away when I was six. My older brother, Johnie Wilson, Jr., was a huge baseball fan. He was eight years older than me, and he wanted to be the next Mickie Mantle. He collected bubblegum cards and was a huge baseball fan, where I wasn’t. I wanted to be the next Joe Namath. That was my goal in life. If you want to hear God laugh, tell him your plans. 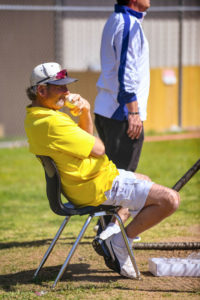 With no dad around the house, my mom had to get a job for the first time to raise three boys on her own in the small town of Channelview, Texas. I heard a voice at the funeral say, “You’re going to make your dad’s last name mean something.” At that moment, I knew I was going to be a professional athlete. I thought it would be football, though.

My brother made me play plastic baseball with him every day. He broke all the little league home run records, senior league home run records, and he loved it. He loved baseball. From ages 6-16, I’m still playing baseball with him because it gave me something to do. I didn’t realize he was making me into a baseball player. So that’s how I got started with baseball. To this day, I believe I can teach any young person how to help them have the best advantage. I was the first 10-year-old they brought up to the 11 and 12 league, because of my ability. I broke all my brother’s home run records, and I led the league in hitting. What I realized was, “Wow. You get attention.” 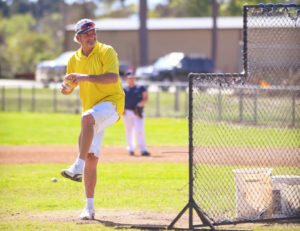 I know you played college at Sam Houston State University, so how did you get to Huntsville from Channelview?

So, I’m at Channelview High School. My freshman year I played on the varsity baseball team, so I played four years of varsity baseball. I hit over .400, and I led the league every year in home runs and RBIs. In football, I didn’t get to play quarterback, because we already had a guy who was in the same grade as me that they brought up as a freshman when I was on junior varsity. When I got up to varsity, I had to play receiver. I was having success in football, but during the first quarter of my seventh game, senior year, I broke my collarbone. 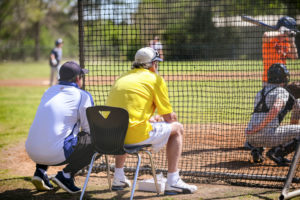 Back then, the camps were three days, and they make cuts each day. I made it through the first two days. Now, these were guys that were about to get drafted, either high school players or college players. In the game on day 3, I go 5 for 5 and hit for the cycle, but with an extra home run. I go over and start packing my stuff up, and it was coach after coach after coach coming by offering me scholarships. And I said, “No, I’m playing football.” When I’m finally getting ready to walk out of the gate, there’s the receivers coach I’ve already met at Sam Houston State. He said, “Hey, aren’t you the kid coming here to play football? Would you like to play baseball, also?” I asked if that would get me out of spring football, and he said yes, so I said, “Yeah, I’ll play!” The next spring I was the starting third baseman.

For football my freshman year, things were going well. For baseball, I had a pretty average year. 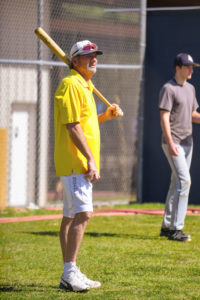 My sophomore year rolls around and, when we had finished two games, I was called into the coach’s office and told I was ineligible. Once I had gone to college, I never went home. I just stayed at school during the summer and took extra classes that I needed. Plus, I had two jobs. I was told that if I wanted to be made eligible for spring baseball, I needed to go home this winter and make $653 to pay back a portion of my school scholarship. My academic advisor was my baseball coach, and he wrongly told me to take History 2. I found him in the grocery store and yelled at him, but it did no good.

So I went home and went to work for the winter. I made enough money except for $53, which my mother was able to give me. Now, I’m playing for a man that I don’t like, so I’m mad all the time inside. I didn’t show it on the outside, but that was the year that I realized that I’m going to have to make baseball my ticket. And I went off. I broke just about every offensive record that year. I came back my junior year for football. After the first day of two-a-days, we were running wind sprints, and I could not keep up. I realized I was out of shape, and the season would start before I caught up. So I decided to go strictly baseball. And that was when it’s totally on. This would be my first year to go full-time baseball, year round. Now, I was learning things that I was supposed to do. Until then, I was doing things on natural ability. So that’s how I got to Sam, even though I wanted to be the next Joe Namath. 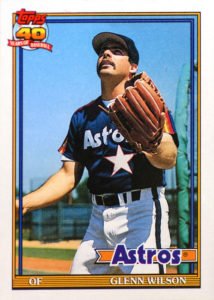 You were a first-round draft pick. You started with Detroit, but eventually ended up in Houston. How cool was it to be so close to home?

It was awesome, to be honest with you. When you go all the way to Detroit, Philadelphia, Seattle, Pittsburg, and having always been in the Northeast, I didn’t know if anyone back home knew what I was doing. ESPN really hadn’t been covering baseball then. In ’89 when I was traded here to Houston, I was tremendously excited, even though I had forgotten about the fact that I would have to buy a lot of tickets. I had a ton of support from people from Channelview, Sam Houston, and Huntsville. It was pretty awesome, because I was getting toward the end of my career, and I knew it a little bit. I ended up getting my 1,000th career hit in the Astrodome. I also got my 100th career outfield assist. That’s what I was known for more than anything in my career. If you mention my name to someone who knows me, or knows of me, they’ll say, “Oh he’s the guy with the arm.” I was also just voted as the 36th greatest outfield arm in the game. That’s kind of a cool thing to have on your Wikipedia page. It’s just a thing that one day one of my grandkids may look and say, “Look at this! He led the league in assists for three years!” So that’s kind of what I was known for, even though I was a one-time All-Star and I did drive in 100 runs, which was something I never really thought about. 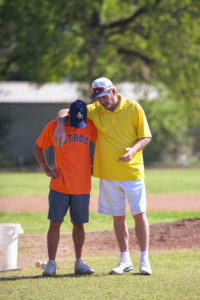 This year, you’ve seen yourself come back to Huntsville to coach Alpha Omega Academy baseball. What led you back?

God, plain and simple. I was contacted by Bert Lyle. He went to college at the same time as I did, and so did Coach Wes Jones. Coach Lyle had contacted me first and asked what I was doing these days. I said that I was playing golf every day; I’m retired. He asked if I felt like coaching. He asked me to come up here to the school and take a look. So he and I met, and he had me meet Coach Jones, the athletic director. Before I met with him, I went out and parked by the field and was looking out over the baseball field, talking to God like I do now. I always talked to God, but I never always lived for Him. I was leaning on the fence, and I asked God, “Is this where you want me?” 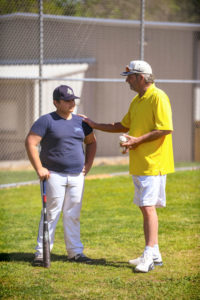 This was a town that gave me a start. Then I asked myself, “What’s the name of this school?” I walked around the building and saw that the name was Alpha Omega. Then I got what God was telling me. Alpha and Omega is the beginning and the end, so Huntsville would be the beginning and the end for my life in baseball. That’s the way I look at it. I then went in and talked to Wes. He asked if I was interested, and I said, “I’m very interested. If you need me, I’m here. I’m ready.”

Of course, I wasn’t. I had no idea about the high school system whatsoever, but I know baseball really well. I was very fortunate to play it since I was a kid. I still haven’t won that championship, so that’s my goal. My number one goal, though, is to teach each kid everything that I can possibly teach them that’s in me before we even get started playing. The good news to the kids that are going to get me, is that they are going to get all of me, because I know this is where God wants me.