Do You Know? Clint McLaren 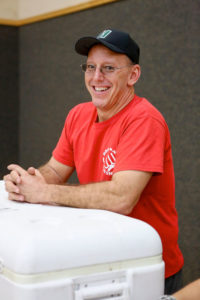 It’s a home game night for the Huntsville Hornets. The weekly practices have been logged in, and the gear is packed and ready for its trip to Sam Houston State University’s stadium, the site for Hornet home games. It is now time for some comfort food and a brief time of relaxation before the clash of strength and strategy hits the gridiron. The anxious, but confident, players board the bus and head to Northside Baptist Church, where a hot meal of smoked chicken, baked beans, and all the trimmings await their voracious appetites. And, this is where we meet Clint McLaren, our man of the hour!

Clint, before we spend time with you and the team, let’s start a bit earlier in your life to find out just who you are. Did you grow up in Huntsville?

I grew up in the Conroe area, just off FM 1488, where my family had 10-20 acres. Of course, going back to that area now with its exponential growth, it’s hard to believe that my early years were spent in the leisurely outdoors. Growing up, we attended the First Baptist Church in Conroe where my parents, Jerry and Norma, served as Sunday School teachers. Family, church, and football filled my high school years with meaning and activity. I played offensive lineman in high school and benefited from some great coaching. 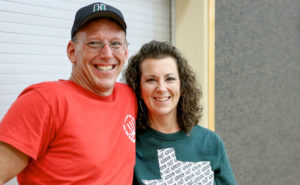 Where did you attend college, and was football a part of that picture?

Well, “no” to the football question. I attended Stephen F. Austin State University and was a Lumberjack for only one year. I stayed in the dorm call the “Zoo,” and as my dad noted, I did not apply myself to my studies. I guess the academic life was not for me, so after that one year, I moved to Corpus Christi and became involved in the construction business as a civil engineer working on a survey crew. Math runs deep in our family. My dad is a chemical engineer, and his dad, a civil engineer. In fact, needing to work, my granddad dropped out of junior high school and eventually became the only certified civil engineer for the state of Louisiana. I was following in good footsteps.

I worked survey crews in Corpus for a year, and after moving multiple times, I eventually ended up in Victoria in 1990. While there, I met and married my wife Laurie, and we now have two children. Taylor, our daughter, works with me at Wiesner, Inc. Our son, Derric, works tow boats on several rivers including the Mississippi, the Cincinnati, and the Illinois, and he loves it! 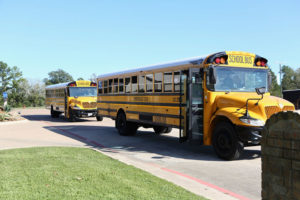 What was the path from Victoria to Huntsville?

There were a couple more twists and turns in the road before arriving in Huntsville. As an engineer, I was tasked with the job of completing projects with quality and speed, and once finished, the search was on for the next paying job. With a family, I needed something more secure……like selling Kirby vacuums door-to-door! Yes, selling vacuums! Never in a million years would I have wanted to sell anything to anybody! It would involve speaking to people and conforming to company rules, like wearing a tie! In high school, I applied to work at Randall’s as a sacker. They made you wear a tie. I went home and told my mom that I would not be a sacker. Upon learning why—and being very unimpressed with my answer— she sent me straight back to take the job. That job taught me that being courteous and treating people with respect brought respect in return. In this instance, it meant better tips, but it was a great life-lesson, too. Selling vacuums took me through the areas of Port Lavaca, Schulenburg, and Hallettsville for the next three years. 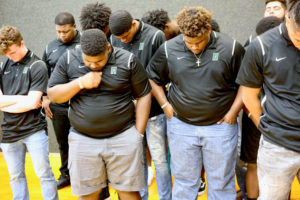 But now, with a young family, including a two-month-old daughter, I was scared to death as I thought about providing for their future. I quit my job and moved back home to be near family and to look for a job that would provide more financial security. In June 1993, I took a job selling cars at Joe Myers Nissan in Conroe, and in May of 1994, moved to Huntsville for the opening of the new Wiesner dealership, where I now serve as General Manager. I’ve been here for twenty-four years, and have become fully involved in the life of Huntsville. We love it here!

In twenty years, a person can get quite involved in the community. In what capacities do you serve this wonderful city? 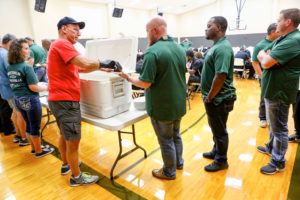 First of all, I want to give credit to the employees of Wiesner for allowing me the time and opportunity to serve others in this community. I absolutely love serving people and have been able to accomplish this in a number of ways. Involvement with the Chamber of Commerce by serving on several boards, including that of the Huntsville Leadership Institute, has given me great satisfaction, and I continue to support and assist with other programs as well. I currently serve on the Executive Board of the Walker County Fair, and during the WCF Cookoff, you can always find me at the Wiesner booth cooking and serving up steaming hot plates of BBQ, complete with all the trimmings.

When this article began, we found you at Northside Baptist Church cooking for the HHS football team. What’s the story behind all this cooking? 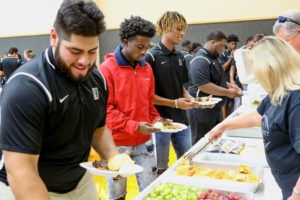 Huntsville Hornet football players gear up for a home game with hot grilled chicken in a relaxing and spacious environment.

I love to serve others, and I love to cook! The opportunity to serve the football team evolved through a friendship with Coach Jason Elliott and our family’s membership at Northside Baptist Church, where Laurie serves as secretary and I serve as a deacon. In a conversation with Coach Elliott, I learned that the football team would have its pregame meal, consisting of sandwiches and a few casseroles, served in the fieldhouse, where there was very little room for the 45-50 players to relax and enjoy this essential time together. I have a very large BBQ pit that sits atop an 18-foot trailer, and Northside Baptist Church has a large dining facility that can comfortably seat a large gathering. Pastor Reagan Cooksey was more than agreeable with the idea of serving the pregame meal at the church, and “the rest is history,” as they say. The team provides twenty gallons of Gatorade, with the other strictly-regimented menu items being provided by Wiesner. This has been a life-changing event for me over the past ten years. I’ve had the privilege to get acquainted with a very polite group of young men who, after eating, help with clean up and always express their appreciation to the group of more than 20 booster club and church members who volunteer to help. This has been very rewarding to me. 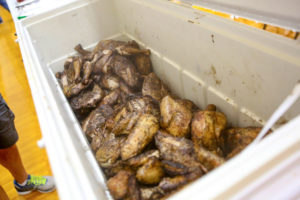 I understand that you have been involved with cooking and serving at some other major events. Please share these stories.

God has provided me with the opportunity to serve at several major events, one being associated with the tragedy of Hurricane Harvey as it unfolded south of Huntsville. Northside Baptist Church became a transitioning facility for the Texas Rangers, the Texas Rangers SWAT Team, and Special Forces, as well as for several friends who took boats down to the devastated areas to help with rescues and clean up. For two weeks, we provided meals for those transitioning in and out of the facility. Laurie and I, along with other volunteers, would arrive at 4:30 a.m. to cook breakfast, and would cook dinner as well, providing for two crews each time, one going out and one coming back. Lunch consisted of sandwiches and other leftovers. 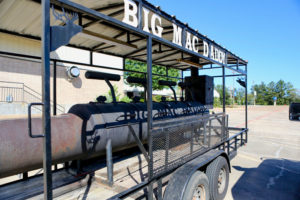 When Hurricane Katrina interrupted life on the Texas coast in August 2005, there were major power losses in the Huntsville area. My BBQ pit put in hours of service as we encouraged local residents to bring their food surpluses to be cooked before they could spoil. We also provided meals to storm refugees sheltered at the First Baptist Church. Twice a year, I have the pleasure of cooking for the Wiesner’s Employee Appreciation event. And, a group of friends and I cook every Wednesday night for those gathering at Northside Baptist Church for Bible studies and other ministry activities.

I love staying active, and have a hard time sitting still for any period of time. Whether it is cooking, hunting, mowing, or some other service that I can render, my family is always supportive of my involvement, and they enjoy serving others, too.

Who is the role model who has provided the most inspiration to your life?

That’s easy to answer. It’s my dad. Of course, my mom, too, but I wouldn’t be who I am as a husband and father without having my own father to emulate. God moved in a very special way to provide me with the dad I have, because I was adopted at birth. My parents informed me early in life that I had been adopted, and always assured me of their love for me as they raised me with wisdom and loving care. 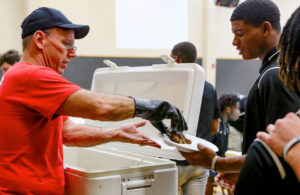 I received a phone call one day in 1995 from a stranger who needed to know something for “his own benefit, not mine,” as he put it. After a brief explanation, he asked if I was adopted, to which I answered “yes.” His mother had recently informed him that she had a son whom she had placed for adoption at birth because she couldn’t care for him and wanted him to have a better life. I was the brother he was looking for. If my parents had not informed me early on of my adoption, I would have been devastated and confused, but instead was prepared for this very awkward, but monumental moment! His family, along with my birthmother, came to meet me and my entire family, and, yes, I cooked for them! It was a wonderful time together, and I’m grateful to my parents for paving the way for this success. And as you might guess, I am very pro-life! Every child can be a blessing to a family somewhere, and that opportunity should not be taken away. I thank God for the life He has given me and for the unending opportunities He provides me to serve and to pass along His blessings to others.