Do You Know? Carl Bridges, Jr. 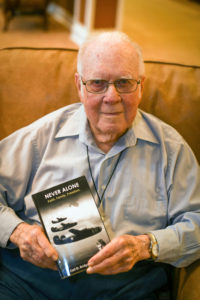 Tell us about yourself.

I was born in Grapeland, Texas on June 5, 1924—I am now 92 years old. Grapeland, at that time, had a population of about 1,400 people, and I think the population is much the same today. Grapeland was a farming community and a family-friendly town. I can remember on Saturdays, farmers came to town to purchase supplies. There were more horse/mule drawn wagons on the street than cars. One of my favorite jobs was working for my grandfather when I was 15 years old. He had an ice house, so I drove his pickup to Crockett, Texas to pick up ice and distribute it to people in town who had ice boxes. I graduated from Grapeland High School in 1941 at the age of 16. At that time, high school went to the 11th grade. There were 21 students in my graduating class. Not one student in our high school class had a car. My family moved to Conroe early in the year of 1941 before I finished high school, so I lived with my aunt until I graduated.

Tell us about your move to Conroe after graduating from high school. 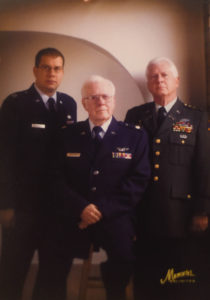 Conroe had only one main street; it was Highway 75, which ran through the middle of town. Most businesses were located around the courthouse square. Conroe was growing rapidly at this time, as there was an oil boom. Streets were being paved, a new courthouse was being built, along with a new post office and new schools. I got a job at Wahrenberger & Sons General Merchandise Store. The store sold groceries, dry goods, shoes, hardware, clothing, and hats (men wore hats in those days). The store also had a funeral parlor; it was very varied. Most of the people doing business at Wahrenberger’s bought items on credit and would come in once a month to pay their bill. I was paid $75.00 per month, which I thought was good money. I learned to live with almost no money, as I was saving to start college at Sam Houston Teachers College in Huntsville. I met my future wife Loyce while working at Wahrenberger’s store. I didn’t have a girlfriend at the time. She was one of God’s gifts.

I was at home when news came over the radio that Pearl Harbor and the Island of Hawaii had been bombed by Japan–and we were at war. I was 17 years at the time and too young for the draft. I knew I would probably have to go to war someday, but I didn’t rush down to enlist. It took some time for the United States to gear up for war. We had very little information about the Nazis and Japanese. We learned what was happening in the world through newsreels at the movie theater and listening to the radio. I continued working at Wahrenberger’s Store until September of 1942, when I started college. I registered for the draft, as there were no deferments for college. I planned on majoring in music and was in the college band—I played the bass horn.

I didn’t have a car, but I could get on Highway 75 and hitchhike to Conroe. I could be home most of the time in 45 minutes. I did the same thing (hitchhiking) going back to Huntsville. In November of 1942, the Army Air Corps came to Sam Houston recruiting students for pilot training. I had never been near an airplane, but I figured if other guys could fly, I could, too. Just one semester of college made the difference between being a private and an officer. I didn’t have to wait long. I went on active duty on February 18, 1943 and was sent to Sheppard Field in Wichita Falls, Texas for basic training. I was issued uniforms with about 50,000 other recruits. There were 10 mess halls at Sheppard–you could tell the United States was really gearing up for war.

You became a pilot during WWII – Tell us some memorable experiences from this time. 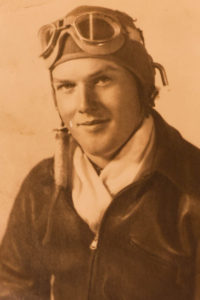 Pre-aviation training was in Tennessee. My first flight was in a Piper Cub–they wanted to see if I would be afraid of flying or would get airsick. I flew with an instructor for 10 hours and actually got to fly the plane and land it.

I graduated advanced flying school in Mississippi in 1944. I was now a trained pilot and a 2nd Lieutenant in the Army Air Corps–I was still 19 years old. I was granted a 19 day leave and married my sweetheart Loyce. Her identical twin sister Joyce was also married at the same time in a double-ring ceremony in Conroe, Texas.

I then had intense training on the B-24 Four-Engine Heavy Bomber in Montgomery, Alabama. I had a very good instructor who taught me not to be afraid of the B-24. In fact, I had very good instructors throughout training. The Army Air Corps trained us very well. All through training, we never had an accident or someone killed until B-24 Transition Training at Maxwell Field. A B-24 came in to the ground upside down and crashed. Everyone aboard the plane was killed.

My crew and I trained together in South Carolina. It was an odd situation, as we had German POWs serving and working in the mess hall. It was also here that I tried to rent a car, as my bombardier and our wives wanted to tour the countryside. I was told I couldn’t rent a car as I had to be 21, yet here I was flying a B-24 on a daily basis. We flew quite a few of our missions over water. Later, I found flying over water came in very handy as I would eventually be assigned to the Mediterranean Theater of War, where much of our flight paths were over the Baltic Sea. 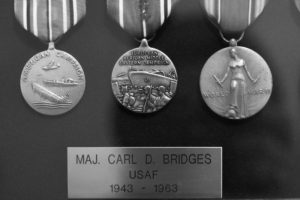 My overseas duty assignment to the 449th Heavy Bombardment Group in Grottaglie, Italy started with boarding a Liberty Ship at Newport News, Virginia. We were part of an 80 ship convoy. The fastest ship could go only as fast the slowest ship, which was eight knots. I was assigned to a cabin with 8 other officers. Back then, almost everyone smoked, but I had vowed early in my life never to smoke. I couldn’t stand cigarette smoke, so I found a spot in a lifeboat which had room to make a bed, and I slept there for the whole journey overseas to Italy. The ship landed at the port in Naples, Italy. The harbor was strewn with sunken ships of all sizes. Engineers built a concrete causeway over the sunken ships. We must have walked at least a mile over the sunken ships before reaching the port’s wharf—this was our introduction to war. We were loaded on a bus and sent to a replacement camp. The next day we were loaded on a train (boxcars) and traveled all day and night and part of another day before reaching my final destination in Gottaglie, Italy. I was assigned quarters. Road signs in Italy were in 8 different languages, as we had people from different countries flying out of the airbase at Grottaglie. Since I was a 1st pilot, I had to be checked out–this is what I had been training for. My first 5 flights were as a co-pilot, so I could see what I would be facing. I was assigned a B-24 along with my original crew.

Before our first bombing mission, I called the crew together and told them that I have great faith in God, that I was a devout Christian and felt it was my duty to get each of them back safely through the dangers we faced. I told them I would be sober and ready to fly. I never forced my faith on my crew; I just tried to set the proper example for them to follow. None of them ever got into trouble. My crew and I flew 41 bombing missions over Germany, Northern Italy, Austria, Hungary and Yugoslavia. On our bombing missions, I would hum my theme song, Never Alone. It helped me to stay calm and focused on our bombing missions. My crew liked my calmness as 1st pilot and had great confidence in me. I thank the Good Lord that we all came through these dangerous missions without any great injury or loss of life. 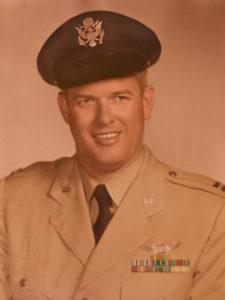 Did you remain in the military after World War II?

Yes, I did. The Army Air Corps became the Air Force, and I became part of the Air Force’s air traffic control structure. I served in quite a few locations in the United States, and tours of duty in England and Korea during the Korean War. I remained in the Air Force until my retirement in 1963. I retired as a major.

What did you do after retirement from the Air Force?

Upon my retirement from the Air Force, I went to work with my brother-in-law, who was in the business of developing subdivisions. Part of my responsibilities was flying airplanes to subdivision sites in Montgomery County and throughout Texas. Lake Conroe was being built as this time. Some of the subdivisions we developed in Montgomery County were Lake Conroe Forest, Frontier Lakes, Arrowhead Lakes, Cape Malibu, Point Aquarius, and Montgomery Trace. I finally retired at age 75; however, I had stopped flying at age 60 on doctor’s orders.

Where do you call home?

I consider Conroe to be my hometown. Being 92 years old, I now live in an assisted-living home in Conroe, where help is available should I need it. I still love music. I sing with a group that enjoys singing, and we perform once a week for residents. I like to stay active and involved. My son and daughter both live in Conroe, and they see that my needs are met.

You wrote a book titled Never Alone. When did you write it, and when was it published?

Finally, after further reviews and more intense editing, the book was published in September of 2016. The book details my early years, training to become a pilot, assignment overseas as a bomber pilot during World War II, ferrying a B-24 back from Italy to the United States, aircraft I flew, and passing on the importance of our military to my son and grandson.

What would you say to the youth of today?

Get a good education and continue learning throughout your lives. Study history and learn the importance of it. If we don’t learn from history, we are apt to repeat that which we regret. I believe my story and others like it should be told. My experiences and sacrifices, and those of millions more like me for this great nation, must be remembered and passed along to this and generations to come. World War II had the greatest impact of any event taking place in the 1900s, and the victory of the Allies is a beacon for the freedom and liberties the United States and most of the countries in the free world so rightfully share. The freedom and liberty fought for in this great event of history demonstrates the lengths all free men and women will go to preserve what must be maintained. We are facing the same type of tyranny today as was apparent in World War II. As we did then, we must stand firm again in a unified front against the evil being perpetrated today. Remember, Freedom and Liberty cannot be conquered.