Day in the Life: Rob Tieperman 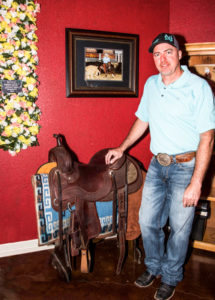 By day, Robert Tieperman is a doctor of chiropractic, with successful practices in Madisonville and Buffalo. On a typical day, he sees about 40 patients; however, on Mondays and Tuesdays, Tieperman’s workday is not over at 5 p.m. When he arrives at his home near Centerville at about 5:45, he changes into jeans and cowboy boots. As a line of horse trailers forms outside his barn, his second workday begins.

Tieperman is well known throughout this part of Texas as an equine manipulator. Working in conjunction with doctors of veterinary medicine who refer their equine patients, Tieperman, using only his hands, patiently and gently palpates horses along their spines to find and manipulate areas that are causing discomfort and reduced performance. He relies only on word-of-mouth advertising and referrals, yet there is no shortage of horse owners in the area who trust their horses to Tieperman’s touch.

6:00 p.m. – On a typical Tuesday evening, Tieperman begins talking to the first horse owner at this time; however, he has cleared his normal Tuesday schedule for the Postcards team, and instead leads his own draft horse Jack into a stall. His wife Melanie assists, while their six-year-old son Braxton has a merry time playing in the barn. 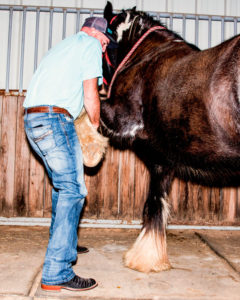 Jack is clearly not afraid of the manipulation. Tieperman runs his hands over the horse, beginning at the hips, slowly working his way along the back toward the neck. He feels the joints along the spine, and assesses which ones are moving smoothly and which ones are “locked up.” When he finds a problem, he adjusts it with his hands, a maneuver that horses often appreciate. “When I work with horses, I don’t use any sedation—no drugs or anything—to calm them down. I use a slow, soft approach to make them feel comfortable,” Tieperman says. “The horses sense that I am there to help them.”

6:20 – Jack has fully cooperated with the manipulation. Now, he licks his lips in appreciation. This equine “thank you” is a regular occurrence, Melanie says. Tieperman usually works non-stop, seeing horses every 20 minutes from 6 p.m. until 8 or 9 p.m., and it would ordinarily be time for Tieperman to see the second scheduled horse of the evening. On this evening, however, he gives the Postcards team his undivided attention. We sit in the barn, pepper Tieperman with questions, and take photographs. 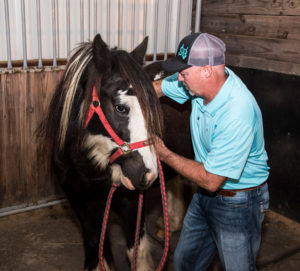 Two barn cats—one gray, one calico—take a liking to us and leave paw prints on my notes.

Tieperman tells us that he grew up in Arkansas City, Kansas, where he played high school football and basketball. When a badly sprained ankle led to secondary pain in his back, a chiropractor successfully treated both injuries. The experience was crystallizing, and caused Tieperman to think about chiropractic as a career. He ultimately moved to Dallas to attend the acclaimed Parker Chiropractic College, graduating in 1992. He began practicing in Liberal, Kansas, but after about three years, his memories of Texas tugged at him relentlessly. “I tell people, ‘If you ever go to Texas, if you go somewhere else, you will want to come back,’” he says. He moved to Lufkin, spending about 12 years there before opening his chiropractic practice in Madisonville in 2007. He started his practice in Buffalo in 2012. 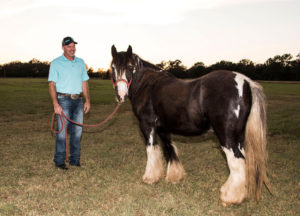 6:40 – As Tieperman shows us around his beautiful acreage, we learn that he is a man of many talents. He designed his own home, as well as four previous residences; he is a former polo player, a former racecar driver, and has been a private pilot for 20 years. It was Tieperman’s love of horses, however, that led to his auxiliary career as an equine manipulator. For about 12 years, Tieperman has shown cutting horses at horse shows around the country. He has an impressive collection of belt buckles he has won, but he is especially proud of the amateur championship he won at the prestigious National Cutting Horse Association (NCHA) Derby in 2013. He also made the non-professional finals at the NCHA’s Futurity World Championship in Fort Worth in 2014, and was amateur champion of one of the cutting horse classes at the Houston Livestock Show and Rodeo in 2006.

It was at such horse shows that Tieperman first got the idea of becoming an equine manipulator. Because he is a human chiropractor—and because he rides and shows horses—fellow competitors have often approached Tieperman with questions about their horses’ performance. “People kept asking, ‘Do you work on horses?’” he says. If he was going to work on horses, though, he wanted to do it “the right way,” he says, so he enrolled in an intensive training and certification program through the American Veterinary Chiropractic Association (AVCA) about ten years ago. Only veterinarians and chiropractors are accepted into this program, Tieperman says. After six monthly meetings on exhausting long weekends consisting of three, twelve-hour days, he earned his AVCA certification. 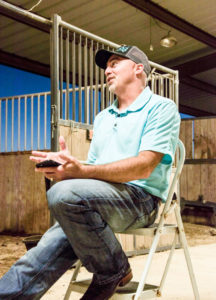 Although veterinarians often suggest equine manipulation, people like Tieperman are sometimes hard to find. He estimates that there are fewer than 100 qualified professionals who currently manipulate horses in Texas. Many horse owners bring their horses to Tieperman in Centerville; in addition, he usually travels to locations within a 60-mile radius one day a week, to ranches or equestrian centers where multiple horses require manipulation. One day a month, he goes to Bay City to work on horses at a veterinary clinic there.

Tieperman regularly gets phone calls from people who have heard about his skill as an equine manipulator. Because he works under the auspices of veterinarians, Tieperman always tells horse owners they need to get referrals from their veterinarians before making appointments with him. Likewise, veterinarians often refer their equine patients that have spine and joint issues to Tieperman. “I have a great working relationship with the veterinarians around here,” Tieperman says. “I’m not doing their work—I’m strictly working on the back and spine. They also know that if I sense there might be more of a problem than a back needing to be adjusted, I tell them, ‘Go to your vet and have them check this out.’”

The horses that need Tieperman’s touch are generally ones that are used for competitive rodeo events (such as barrel racing and calf roping), ranching operations, and horse shows. Typically, horse owners call Tieperman when they notice their horses are not performing well. For example, a horse used for barrel racing might refuse to turn tightly around barrels, or a calf-roping horse might have difficulty stopping quickly. “A lot of ranch people bring horses,” he says. “They say when they rope a steer, the horse isn’t strong enough to pull it anymore.” While the reduction of a horse’s function may be caused by a repetitive use injury, it can also be caused by a sudden, jolting injury. In some horses, the problem is with the neck. “Just like a human being,” Tieperman says, “sometimes a horse can’t turn his head as much to the left as to the right.” 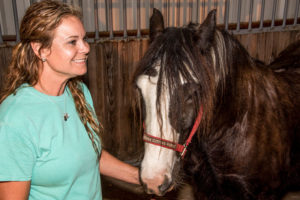 Although he is qualified to manipulate dogs, Tieperman chooses to work only on horses and the occasional show calf or bucking bull. “I’d rather be kicked by a horse than bitten by a dog,” he says. We get the idea, though, that being kicked by a horse is not a usual experience for Tieperman. He is gentle with horses, never manhandling them, and Melanie says they seem to trust him. Even horses that are understandably nervous about being manipulated for the first time soon realize he is there to help. Tieperman, she says, because he has experience riding performance horses, knows things that can’t be taught in a classroom. This knowledge, plus his formal training and professional experience, is a rare combination. “Because he works on people every day, he is able to feel every single joint and know exactly what’s out and gently move that back into place,” Melanie says. “Pretty much after the first adjustment, a sense of relief comes over them, and we can actually see that by their head falling down a little, and they start moving their jaws or licking their lips. Sometimes they even sigh.”

Although some people are skeptical, one equine manipulation session can often turn a horse owner into a believer. In an often-repeated scenario, a barrel racer is married to a calf roper. The wife has had great results by taking her horse to a professional who performs equine manipulation, but her husband thinks the idea is silly. “He’ll say, ‘What are you thinking? That’s the craziest thing in the world’—until something starts going wrong with his horse. She’ll say, ‘Just try it out,’ and sure enough, they get the horse worked on and it’s even better than before they had the problem. Then they are sold. I have seen that happen many, many times,” Tieperman says. Sometimes, exasperated horse owners will threaten to sell their horses until Tieperman addresses their problems. “They’ll say, ‘If somebody gives me $5,000, I’ll get rid of this horse.’ Then after it has been fixed they’ll say, ‘I wouldn’t sell it for less than $30,000.’ They turned into great horses,” he says. 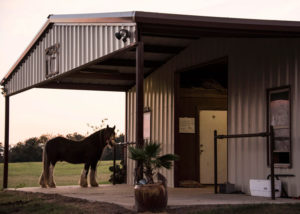 Over the past several years, Tieperman has built a loyal following. Many horse owners bring their horses to him every few months to maintain good alignment, to prevent problems and to ensure peak functionality. “Once horses start hurting and something is bothering them, it leads to mental issues,” he says. “With me riding horses myself, I understand how horses work and how they should move.”

8:20 – Tieperman has patiently posed for photos and answered questions, giving the Postcards team a vision of the patience that is so necessary for his work with horses. He admits that being an equine manipulator is hard on his back, but Tieperman enjoys the part of his day spent with horses. “The best part of the job,” he says, “is the satisfaction I get from a horse that is totally changed and seeing how happy the horse’s owner is from the results.”