Although Santa and his elves get a tiny break after delivering toys to all the children of the world, come January they resume their duties of toy making, travel planning, and staff maintenance. In our community, we have a group dedicated to the same mission of bringing joy to the faces of our precious children, and they keep the same busy schedule of a year-long commitment in order to brighten lives in Walker County.

Wesley Memorial United Methodist Church partners with a number of community groups, businesses, and organizations in creating an assemblage known as Santa’s Helpers. “We provide toys to the clients of Good Shepherd Mission here in Walker County,” said Mary Pat Doak, one of the main organizers of this group.

In January, Santa’s Helpers meet to assess the success of the previous year’s event. They talk about the parts of the program that worked, and things that need to be corrected or changed. The committee members meet throughout the year, planning and assigning tasks in order to make each year superior to the last. Mary Pat and Deloris Gardner acquire corporate sponsors annually. On November 15th, the Shipley family joined with Huntsville Lanes hosting the 5th Annual Santa’s Helpers Bowling Tournament. Outside of expenses, the money raised during the tournament, in conjunction with the silent auction and cake auction, goes toward toys for the children.

The community pulls together in order to make this program a success. First Financial Bank offers their employees an opportunity to wear jeans on Fridays, but the privilege comes with a price. The employees pay $1 to secure this option. All funds collected go towards purchasing more expensive items, such as bikes. The employees will even spend their free time assembling the bikes, before delivering them to the church at year’s end.

According to Scott Atnip, Chairman of Outreach Community at Wesley Memorial, “It is not something we could do by ourselves as a church. It really is a community-wide collaboration.” On the second Saturday in December, more than 100 volunteers show up at the church in order to ensure a successful event.  People from all walks of life and of all ages work diligently, contributing time as jolly helpers. The Hornet Spanish Club, the SHSU Wesley Foundation, the SHSU volleyball team, the local fire department, volunteers from churches throughout Huntsville and surrounding areas, and individuals with a heart to serve, who have been made aware of the need, pour out  to offer support. Scott emphasized the goal “is to spread joy at Christmas time.”

Reverend Dave Smith, Executive Director of the Good Shepherd Mission, provides Mary Pat with a list of the children and their ages. When the Salvation Army receives the inventory, the Toys for Tots program provides a number of toys per child. The KSAM Radio M.A.S.H. also delivers “about a truckload of toys,” according to Scott. 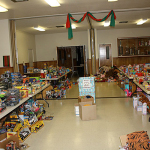 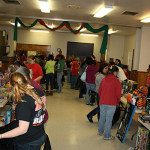 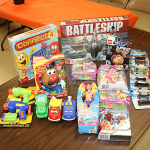 It takes six nights of preparation for Santa’s Helpers to turn a room and hallway of the Wesley Memorial UMC fellowship hall into an area where between 400 and 500 Walker County children have an opportunity to go Christmas shopping. Each night of the week prior to the event, a meal is offered to the volunteers from 5:30 p.m. to 6:00 p.m. Susan Martin, who organizes the meals for the volunteers, also organizes another important detail for the event—porta-potties. For two hours following the quick dinner, the workers set up, clean, and organize the toys, and “price” them according to the point system that has been set up which allows the parents and/or children to acquire the items. In order to figure out how many points each child receives, the number of toys donated and the number of children registered are compared. The system keeps those who are registered first from departing with all the biggest or most popular gifts. This arrangement encourages the families to spend credits wisely.

SHSU senior Alex Velez makes it a priority, even during finals, to find time to help sort, clean, organize, and even assemble items, if need be. She imagines the families experiencing the toys together. “I can’t wait to see the children’s faces when they have these. They are going to have such a blast! I can see a kid going outside to play football with brothers and sisters and dad. It is a sense of joy knowing that other people are going to be happier this Christmas. In the end, I see this as part of my duty as a Christian—serving God, serving others, and loving on others.”

Wesley Memorial United Methodist Church Pastor Cheryl Smith has been touched knowing the Santa’s Helpers outreach has helped some parents who truly have no other options. Before the new system of registering families during the month of November, “Two mothers, one of whom had a young infant, came up and slept on the porch. They made pallets to sleep on so that they could be in line first. That, to me, was an indication of how desperate people are.  It was cold. I wouldn’t have done that. But then again, I’ve never had to do that. To see people who were willing to do that to get a few toys for their children prompted us to come up with a more compassionate system…They register and are served in the order in which they register.”

“Santa’s Helpers is one of those things in which people of all ages join. It is a challenge in a church to find ministries where everybody gets to participate. Literally, all the way from the little ones up to the “older ones” can find something to do to participate,” Pastor Cheryl shared.  Shannon Atnip, Scott’s wife, helps organize the youth volunteers, and their daughter Emily has helped sorting and shopping for toys alongside mom and dad. Many of the organizers have watched grandchildren grow up learning how to serve as a part of this program.

Reverend Dave begins registering families in November. Fliers are distributed in both Spanish and English with information detailing how to register for this offering. Good Shepherd Mission also provides other local agencies which interact with “the indigent, the marginalized, the poor” of Walker County, information about the Santa’s Helper program. “We deal with people with extreme needs. We build relationships with these families to find out what the real needs are…With much of the Hispanic population, parents bring in their oldest child, and they do the business. So we have the children who are going to be at the event registering their families.”  Dave shared sobering statistics. “One in five families comes to us for help. Walker County is the tenth poorest county in Texas…there are a lot of people with jobs who are just underpaid.  We try to improve the quality of life, and at Christmas time, share Christ’s love. It’s not so much about the ‘Americanized’ version of the season. This church works hard at sharing the love.”

“If we keep one child from growing up angry, if one child sees us giving and sharing…that’s what it is all about to me,” Mary Pat followed up with regards to Dave’s comments. As people wait in line, volunteers pass out cookies and hot chocolate if the weather is cold, or Kool-Aid if it is a warm Texas Christmas. During this time, there is an emphasis on building relationships. “We try to make a difference in the households long-term. In our industry of dealing with people in poverty, it is about shifting from a service to empowerment. You have to build relationships in order for that to occur.”

The local fire department originally headed up the Santa’s Helpers program, but as it grew, it became a bigger job than they were able to do. Even though the fire department has passed the torch on to Wesley Memorial UMC, they continue to add their flare to the event. One of the assistant fire chiefs dresses up as Santa and comes on the day of the event in the antique fire truck, ringing the bell as he arrives. He sits for pictures with each of the children.

Santa’s Helpers longs to spread joy at Christmas. This December will be the 26th year of collecting, shopping, assembling, cleaning, cooking, decorating, and organizing in order to share this season of love with many families in Walker County. The volunteers share wonderful memories and enjoy creating an opportunity for community members to unite in service. Scott notes, “Every year, we have more and more toys, and more volunteers. From our perspective, it is just a great way to give back at Christmas.” If you find yourself wanting to give back to the community, join Santa’s Helpers in spreading a little Christmas joy.

Tags:
Previous Article
Gotta Get Away? Marshall: The Wonderland of Lights
Next Article
Twinkle Time