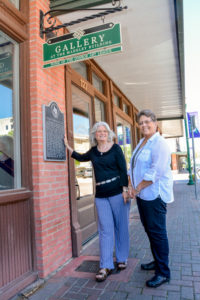 A great idea came to Vickie Nash while she was drawing with sidewalk chalk in downtown Conroe. The annual Chalk Up Conroe was in its infancy, and Vickie, equipped with several pieces of brightly-colored chalk, was creating an original impressionistic floral on a ten-by-ten section of sidewalk outside Owen Theatre. As she transformed her assigned square of concrete into a work of art, Vickie said to herself, “I am thinking that I might like pastels!”

Not long afterward, Vickie, a long-time member of the Conroe Art League (CAL), decided to pursue the idea by taking some of the many classes the league offers. Already adept at several artistic media, it wasn’t long before she became proficient at pastel portraiture. 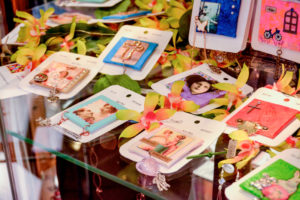 Vickie, the league’s marketing coordinator, is one of more than 250 members of this thriving, non-profit organization. CAL has blossomed in both numbers and activity since its humble start in 1969, when seven local artists banded together for camaraderie, professional development, and community service. Today’s league is proud to host an art gallery, lessons, workshops, competitions, demonstrations, and the opportunity for members to learn from the constructive critiques of noted area artists. The league’s diverse membership includes people from their 20s through 80s, from beginners to masters, who work in a variety of artistic media. Its goal is to “promote and arouse a greater interest in art in all its forms.”

The Gallery at the Madeley Building

The Conroe Art League met at a church for many years, but about five years ago, it moved into its new headquarters. To the delight of league members, the City of Conroe renovated the century-old Madeley Building in downtown Conroe to become the CAL’s new home. The league uses the upper floor of the building, located near the intersection of Simonton and Main streets, for meetings and classes. “There is something going on here every single day,” Vickie says. 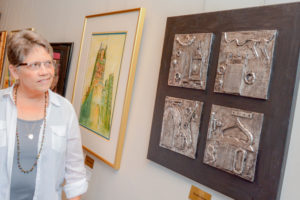 It’s the ground-level floor of the building, however, that has created such surprise and interest among local residents and out-of-town visitors. CAL hosts a gallery, known colloquially as “The Gallery in the Madeley Building,” that is open from 10:30 a.m. until 5:30 p.m. on Tuesdays through Saturdays. The gallery always has family-appropriate, original artwork on display, yet many people have never discovered it. “We get people who stop in here all the time who say, ‘I didn’t even know this place existed!’” says Karen Blake, league president.

Artwork in the gallery is rotated once a month. Most months, displays include original pieces created by league members, who pay a nominal fee and serve a shift as volunteer docent for the privilege of showing their art. In addition to the works that hang on the walls, the gallery also has bins of unframed art, both originals and prints, as well as ceramics and handmade jewelry. Most pieces at the gallery are for sale. Items have traditionally sold especially well to visitors from out of town, Vickie says, because many people like to collect local artwork when they travel. 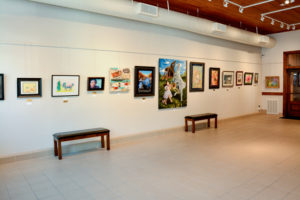 Twice a year—in the fall and spring—the league hosts judged competitions so members can compete in several artistic divisions. “We have different levels, from student to professional, so we don’t have a beginner artist trying to compete with someone who has been an artist all their life,” Vickie says. In addition, the gallery hosts an art exhibit for students during the first part of each year. In recent years, the league has also offered an annual juried contest, which features art from all over the country. At the last such contest earlier this year, 250 artists competed for 50 spots in the gallery, resulting in a rare display of a variety of fine art. 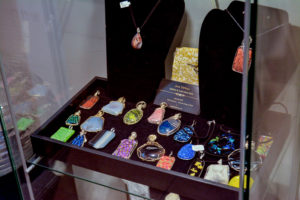 CAL also facilitates art hangings in locations other than its gallery. League members currently have works of art that hang in many Conroe locations, including the Chamber of Commerce, the Visitors Bureau, City Hall, and various other venues around town. “It’s an opportunity for people to put their work out in the public,” Karen says.

The local community benefits from having a venue for original artwork, but the Conroe Art League also helps the community in other ways. Members volunteer at events like Chalk up Conroe, KidzFest, and The Woodlands Waterway Art Festival, and the league raises funds each year to sponsor scholarships for high school seniors who plan to continue their art education in college. 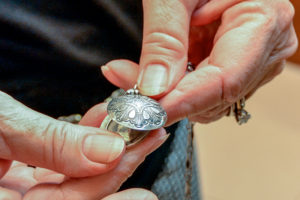 Perhaps the league’s most enduring service to the community, however, is its enthusiastic commitment to art education. Students both young and old come to the league’s headquarters at the Madeley Building to learn art techniques in a variety of artistic media. For example, member Carrie Allbritton teaches ongoing watercolor classes, while Gary Hernandez teaches ongoing classes in oil painting and drawing. “He is very, very old school,” Vickie says. “It’s a step-by-step process. First, he has you copy old masters in order for you to develop your skills with your brush.”

CAL facilitates ongoing children’s art classes taught by Sara Moons, a certified art instructor, and Brett Hall, a portrait artist who holds a commercial degree. Sara incorporates art history into her lessons, Karen says, and many homeschooling parents enroll their children in Sara’s art classes. “They’re not just here to make a craft,” she says. Brett holds classes for children ages 5 through 12 who want to learn how to draw faces. 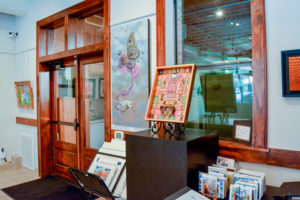 Other upcoming classes include instruction in colored pencils, photography, ceramics, pastels, wood carving, face drawing and silver clay jewelry. Members as well as non-members may take classes; prices range from $20 to $40 per class. The art league also sponsors workshops with well-known artists. Workshops vary in length and price and are open to the public.

Some CAL members come to the Madeley Building every week for “figure group” to sketch a live model and work on their eye-hand coordination. “We call it ‘going to the gym,’” Vickie says. Others come once a week for “creative circle,” where members share techniques with each other, allowing them to experiment with different artistic media. “Every one of our members has learned something new. It’s a very sharing group. Nobody holds back any secrets,” Karen says. “That’s kind of what we are about—sharing and supporting people and exploring their creative side,” Vickie agrees. “I think the thing I like most about our organization is the way we lift each other up. There is always someone to encourage another artist to find themselves in their artistic expression, whether that is experimenting with different media or just building self-confidence.”

Each month, the league holds a reception at its historic headquarters in an effort to provide meaningful dialogue among artists and art aficionados. “Every month, there is a new show in the gallery, and every month we have an artist reception where we have food and wine,” Vickie says. “It’s a good way to meet the artists, and to enjoy and buy artwork, and it’s open to the public,” Vickie says. 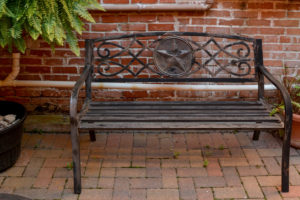 In addition, each monthly league meeting features an artist demonstration, and Vickie invites prospective CAL members to attend. “You don’t even have to be a member to come,” she says. “If we resonate with you, join us. Regardless of what medium you work in, you may get an ‘aha’ moment.” New members join the league almost every week, Karen says.

The membership of the CAL has changed over the years as artists have moved in and out of the area. Some artists have left the area because of their advancing artistic careers. For example, Devin Nelson, while he was still a student, won the “best in show” award at the Lone Star Art Guild State Convention. He ultimately studied in Europe. “He has been back to visit us twice since he went to Europe,” Vickie says. Still, the league’s membership includes “so many people who are notable,” she says, including Craig Campobella, a past league president. People from all over Texas, as well as other states, collect his sculptures, she says. He was recently honored as a “legend” at the inaugural Greater Conroe Arts Alliance Rising Stars and Legends event, along with “rising stars” Wendy Layne, who specializes in realistic colored pencil portraits, and Suzanne Seiler, who is known for mosaics and watercolors.

For more information about the Conroe Art League, visit its website at www.conroeartleague.com.