St. Stephen’s – A Settler’s Church Committed to Worship and Serving the City

If you ask Nettie Thomas what St. Stephen’s means to her, she will tell you about the dedication of its people. She has only been a member since 1994 – for 25 years now – but she is heading up the historical research for the church’s Jubilee celebration on November 3 and can tell you about the congregation’s history dating all the way back to when it was just 10 people meeting in an upper room of the courthouse in downtown Huntsville in 1854.

St. Stephen’s is not only one of the oldest Christian churches in Huntsville, but it is the sixth oldest church in the Episcopal Diocese of Texas. Since it laid its first cornerstone in 1869 at what is now the corner of Sam Houston Avenue and 13th Street, it has grown to around 200 members. It’s a relatively small congregation compared to other churches in the area, but one dedicated to making a big impact in the city.

Thomas can rattle out a long list of community organizations St. Stephen’s members have founded or been heavily involved with: CASA, C.O.M.E., Arise to Read, Good Shepherd, and Promoting Our Positives (POPS), just to name a few.

One that especially stands out for her is the church’s prison ministry. “It’s interesting to see that, even way back in the 1950s, our church was involved in prison ministry. In 1980, St. Stephen’s served as the base for the Episcopal prison chaplaincy to the Texas Department of Corrections.  at has really continued throughout the years,” Thomas said.

“We are very, very active in prison ministry and are involved in KAIROS, the Christian group that goes in and ministers to the prisoners. Ed Davis (a St. Stephen’s member) was the head of it for the state of Texas for many years.”

According to Rev. Johnson, the first Episcopalians in Huntsville began meeting in people’s homes in the late 1840s, about 20 years before they started working on a building.  roughout the years following the placement of the first cornerstone, however, the parishioners faced huge hurdles such as the yellow fever epidemic in the 1870s and the Spanish flu pandemic in the early 1900s. Both almost decimated the small group of worshippers, but each time, the members kept going and were able to build back the congregation.

“It’s really a testament to the strength and faith of the believers,” Johnson said. “ That even in grief, they’re going to continue worshipping God.”

Adversity hasn’t just come in the form of illness, either. At one time, the church was housed in a large building downtown (around where Donut Wheel is today), but it burned down in the 1930s. After meeting in the Huntsville Funeral Home and a variety of other locations throughout World War II, the church was finally able to raise enough money to complete a building in 1948, where it was housed until moving to its current location in the 1990s. At that time, one of the parishioners donated brass for a processional cross, but it was stolen and never recovered. That did not stop the congregation, however.

“The members who had silver flatware and silver jewelry all donated their silver. Each Sunday, they would put their silver items in the collection plate until they had enough to make a processional cross,” Thomas explained. “The sculptor also made some silver candlesticks and the members donated their jewelry with semi-precious stones to make those.”

The processional cross and the candlesticks are in use by the church today and will be on display, along with other items related to the church history, at St. Stephen’s anniversary celebration.

St. Joseph – A Small Town Home for Immigrants that Continues to Expand Its Reach

Fifteen miles south of Huntsville, in the tiny town of New Waverly, a white church with a tall steeple serves as both a historical landmark and the spiritual home to roughly 1,200 Catholic parishioners. About half live as far away as Conroe and Montgomery, but Reverend Daokim Nguyen, the church pastor, estimates about 600 regular attendees who attend weekend services on Saturday evenings and Sunday mornings.

Clara Malak, who has attended St. Joseph for 53 years and plays the organ each Sunday for the 10:00 mass, is the organizer of the church’s sesquicentennial celebration and is also helping with 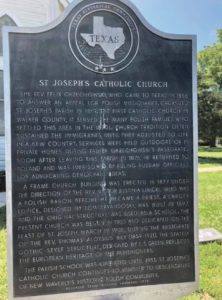 a book about the history of the church. She, like many parishioners, knows the history because her family is tied to it. Her late husband, former County Commissioner Joe Malak, Jr., was a direct descendant of the original Polish immigrants who founded the church when they came to the area in the 1860s.

Malak says the stories she has heard and read of the original Polish immigrants have inspired her and encouraged her to grow spiritually.

“I am inspired by immigrants who had so much faith to leave their country, looking for a better way of life. It took a lot of courage, knowing they wouldn’t be seeing their families anymore and wouldn’t be going back. They had so much faith in God, and they were very devout. We see that through the history of the church. Church came first for them,” Malak explained.

Like St. Stephen’s in Huntsville, St. Joseph did not start in a building and, in fact, did not have a pastor for many years. Instead, they had administrators and circuit ministers who would come and perform the mass and sacraments for the parishioners. the members were predominantly Polish merchants, as well as Poles who were brought to what was then Waverly (before New Waverly) to work in the cotton fields. the parish was established in 1869, and the first church structure was built in 1876. By 1892, the congregation had expanded and a second structure was built, which served the parish until the current church was built in 1906.

Today, the congregation has carried its immigrant focus beyond its historical roots. Father Kim, who has served at St. Joseph for the past 15 years, is originally from Vietnam. He also speaks Spanish and performs a weekly mass in that language, which has brought hundreds of Hispanic worshippers to the parish. Father Kim says that, even with all of its diversity, it feels like a big family–and the parishioners never forget their Polish origins.