“You’ll never make it.” The year was 1976, and the quote was from a CPA whom Terry Woods had gone to for advice on how to start a business. With $189 in his pocket and a wife and two children to provide for, Terry stepped out in faith and determination to build what has become a very successful business, a business which has served Walker County and surrounding areas well during the past 40-plus years. Woods Welding, Inc. is known for quality products and excellent service, all served up with a good dose of neighborly hospitality. And as Terry says, “Hard work will get you somewhere when you stay with it.” He has proven that. 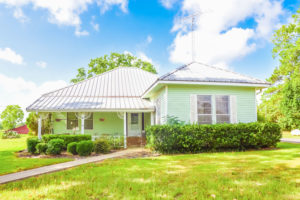 Woods Welding, Inc., located at 1023 FM 1696 West, just outside of Huntsville and west of Crabbs Prairie, is situated on what was formerly the Liberty Springs School property. Terry’s grandfather bought the schoolhouse and 100 acres years ago, and in 1979 Terry moved his business to this location and he and his family lived in the remodeled schoolhouse for many years. His manager lives in the house today, while the business still flourishes at this location with plenty of space for larger jobs such as those that have been undertaken through the years. 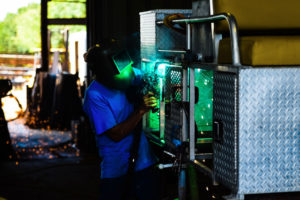 “No project is too large or too small,” Terry states. Wholesale steel and fabrication is their specialty, but, as he says, their services are wide and broad. Welding is just one part of the business. They work with any type of metal and will take on a wide array of projects including the building of barns and metal structures, all types of trailer repairs, fabricating and installing automatic gate entryways, and even some mechanical work. “If a person has a problem and we can take a look at it, we’ll try to repair it.” As he shares accounts of the many jobs that have come his way, Terry remarks that it is not uncommon for someone to drive up during the day with a broken wheelchair or other device where urgency is an issue. When possible, that problem will get fixed immediately. Terry has always viewed community as important and strives to meet these types of needs for people. “Customers are the lifeline to this business,” and he and his employees, several of whom have been with him for many years, understand this and take care to provide quality and friendly service. 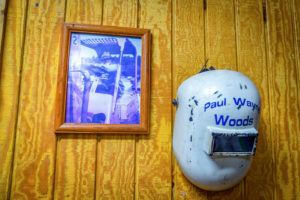 Woods Welding, Inc. is a family business where Terry’s wife Wanda, more familiarly known as Susie, serves as secretary, and his daughter Shelly serves on the board. Son Paul, two weeks away from graduation in 1994, and preparing to take a role of responsibility in the business, was tragically killed in a car accident. The loss of Paul was devastating, and the hopes and dreams of working in business with him for years to come were crushed, a pain that never subsides. His picture and welding helmet, displayed on the office wall, remind Terry every day of the joy Paul brought to his family. 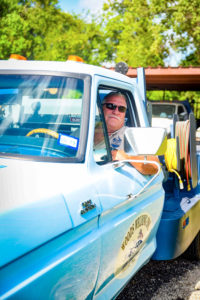 Terry got his start in welding while in Ag class in high school, and he had two uncles who worked as welders for Armco steel, so his introduction to this trade came early. His first job was with Heil Tank Services, where he worked his way up the ranks and earned all the certifications needed as a welder. While there he met and became good friends with Jack Olsta, who later encouraged him to begin his own business. “Jack knew my potential better than I knew it myself.” After working a short while for Quality Valve, where he was a welder for high pressure vessels, and doing extra work on the side to make ends meet, he took Jack’s advice and went fulltime with his own business. Hard work brought growing success until oil hit a low in 1986. At that time, Terry had several large contracts for oil-related equipment, contracts which were immediately canceled, leaving him owing vendors $65,000. Rather than declaring bankruptcy, he paid off his 10 welders, closed the doors of his business, and went to work at a lumber company in Nacogdoches. 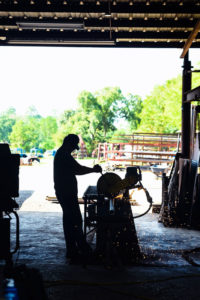 This led to a job building a sawmill, and for two years, he put in twelve-hour days, seven days a week and was eventually able to pay off his suppliers, all of whom stood behind him and are still with him today. It took him ten years to repay the debt, but as soon as this was accomplished, he packed up his family and headed back to Huntsville and reopened his business here. Having grown up in this area, Terry and his family have always been loyal supporters of community and have been especially supportive of the Walker County Fair and Rodeo. Plaques line his office walls expressing appreciation for the many years of support that Woods Welding, Inc. has given to this deserving endeavor which provides a platform for encouraging local youth toward success in a variety of fields. Woods Welding, Inc. is also a supporter of the Wounded Warriors project, and Terry served as a volunteer fireman with Crabbs Prairie for 25 years.

Woods Welding, Inc. serves Walker County and an area within a 100-mile radius. They are the vendor for several major entities in this area including Huntsville Independent School District, Sam Houston State University, the City of Huntsville, and Walker County. And Terry is grateful to have many longstanding customers who continue to bring in an array of projects including new ideas to build from the ground up, or equipment purchases that need custom fixes. As he states, “We are a job shop and a repair shop. We take all kinds of work. Whatever the product is, we can work with it and repair it. Just bring it!” 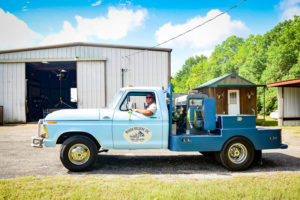 In 1999 Terry, along with Jack Olsta, contracted with the military to build refuelers which were delivered to all U.S. airbases. Over time, they built 62 units. He also contracted with Butler Tech, a local company, to build pipeline equipment which is still in use today in Russia, Japan, and other places around the world. Terry means it when he says, “No project is too small or too large. We do it all!” He has proven this and has proven a character of integrity as well. He stands behind his work and behind his community.

Woods Welding, Inc. welcomes any and all projects and welcomes you as a friend when you walk in that front door. If you want to talk “hunting and fishing” during your visit, your tall tales are welcomed as well! And look for Terry’s beautifully restored original Woods Welding truck in the next local parade. He began his business out of this truck, and just as friendships with customers endure, the truck is still with him today. Contact Terry at Woods Welding, Inc. at 936-294-9708. His family and employees look forward to serving you soon.