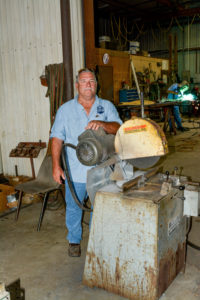 It is a great pleasure to know Terry Woods, president and founder of Woods Welding.

Terry has been in the welding business for 41 years. He grew up with uncles who welded, and he took a vocational class in high school to learn the trade more comprehensively. In 1976, he entered and won a welding contest, deciding to take the momentum to open his own welding company, building it from the ground up. “It took a lot of hard work,” said Terry. “I started with nothing, and a wife and children depending on me. Now, I’m here Monday through Friday, and we usually work on Saturday; I stay from 5am to 5pm. My wife says I need to retire, but I don’t think I ever will. It’s in my blood. I enjoy it. When you do something as long as I’ve been doing this, you’re dedicated.”

Woods Welding is eager to take on any job, regardless of how challenging or unusual. They work both in the shop and the field, commercially and residentially, and take on anything from repair and service work to custom art projects. They have two service vehicles for jobs in the field. There are four fulltime employees aside from Terry, and the company works with several contractors on jobs requiring more laborers.

“It doesn’t matter if you need a whole facility worked on, or your rocking chair is broken,” said Terry. “Bring it in, and we’ll fix it.” 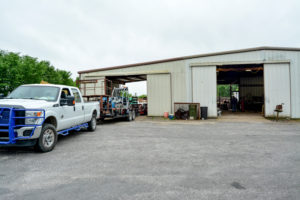 The shop is located at 1023 FM 1696 West in Huntsville, on the land previously owned by Terry’s great-great grandfather. The old house was used as the Liberty Springs School House in the late 1800s. Now the property also contains a large workshop and nearly 5 acres of equipment and project storage.

“I did not expect this to become what it is,” said Terry. “I didn’t think welding was what I wanted to do, but people pushed me towards it, and it grew into a big thing. The people of Walker County have been real supportive of us.”

Located out in the country, Terry had plans to move the business into town in 1994, a dream of his son, who was planning to join his father as part owner in the welding business, when tragedy struck. Terry lost his son two weeks before he was to graduate from high school. This life-altering event led Terry to opt to keep the business in its original location on FM 1696, choosing to stay small and focus on being relationship-driven. 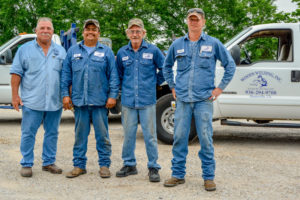 Customers of Woods Welding attest to Terry’s respect and love for people. Jack Olsta of Olsta Company has nothing but praise for Woods Welding. “They don’t come any better than Terry Woods,” said Jack. “He’s always honest, always does great work. He’ll help anybody out. The workmanship is unbelievably good, but it’s Terry’s character that leads that company.”

Jason Cadwallader of Holly Water Wells concurred. He said, “Terry values your relationship and helping get your job done. He wants to help you accomplish something. When you call him, he looks at it like, ‘How can I help?’ rather than, ‘How much money can I make?’”

The welders Terry has hired are excellent in their craft. They have a full inventory on site at the shop for nearly any job, and they love a challenge. They perform regular work on horse trailers, fence repair, automatic gates, and custom signs. “It takes the right people—talented people—to take on these projects, and we’ve got them,” said Terry. 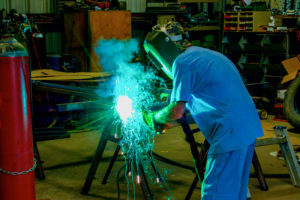 Scott McCrea has been employed by Woods Welding for 11 years. He grew up welding and is passionate about the job. He said, “It’s the fabrication that I love. Cutting materials up, putting it back together, creating something. I love it.”

Trent Hoeser, manager of Woods Welding, has worked for Terry since high school and has been with the company for 19 years. “This is hard work. Not everyone can do it,” he said. “It’s mentally and physically hard. But it’s great to help someone out when someone else said it couldn’t be done.”

One of Terry’s favorite jobs was making aircraft refueling equipment for a government contractor in 1998. “Most people don’t know that a lot of that equipment was made right here in the shop,” said Terry. Another favorite job was bringing a team to build an entire plant for a mining company in Arkansas. Woods Welding was invited to work with Buckner Tech to build a one-of-a-kind pipe assembly machine the tech company had invented, which was another special project. 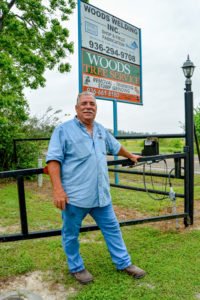 Terry takes joy in participating in the Walker County Fair every year, helping kids with their projects. He also attends job fairs at the schools and prisons in an effort to help people find jobs and discover their passion. “Over the years, I encourage high school students who are interested in welding to give it a try,” he said. “I’ll hire them in the summertime or a work study for credit.”

Manager Trent added, “If someone wants to work, we want to teach them to do it well.” “If they have the gumption to work, I won’t hold them back,” finished Terry. “Everyone should do what they really want to do. People get in a rut. I’m fortunate to have found something I love.”

Woods Welding does steady work year-round without experiencing a low season. They are the “go to” welding vendor for the Walker County precinct, the City of Huntsville, Sam Houston State University, and Huntsville ISD. They have many repeat customers, like Jeff Markham of Markham Realty. Jeff shared, “Terry’s done work for me for 35 years. He’s fast, efficient, and smart.”

“Truly, we do whatever people want,” said Terry. “This is hard work, but it’s rewarding. People have been good to us. I look forward to helping people. I won’t ever quit. I won’t ever retire.”