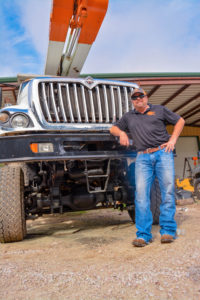 When Gene Woods opened Woods Tree Service in November of 2010, he was looking for a side business to supplement his income as a territory manager. Little did he know that his side business would almost immediately turn into a full-time job, in large part because of the Texas drought. 2011 was the second driest year on record in Texas. A lack of water wreaked havoc on crops and vegetation, and the demand for tree removal created a surplus of work. Since then, Woods Tree Service has consistently grown, adding equipment, machinery, and employees to become a reputable, dependable, and hard-working company in the Huntsville,Texas area.

Gene Woods graduated from Huntsville High School in 1994, and he spent eight years working for the Texas Department of Criminal Justice before pursuing his bachelor’s degree in political science at Sam Houston State University, graduating in 2007. 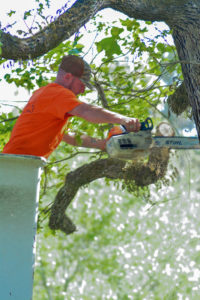 As he and his wife Teresa determined to start their own business, they decided on tree removal, because Gene had experience cutting and trimming trees from his youth. “With the name ‘Woods,’ I should have known this was meant to be,” said Gene with a chuckle. “Woods and trees go together!”

A sixth generation resident of Walker County, Gene has always thought it is important to support small business in his hometown. “I believe in spending money in the community. I shop locally—whether it’s a chainsaw or tractor or whatever. I’m proud of where I live and my local roots, and I bring that pride with me on the job.” 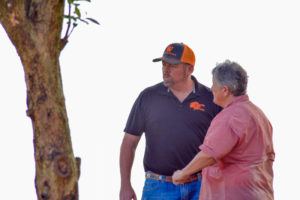 Because of his heritage, the Woods name is well known in the Huntsville area, and Gene works hard to honor the positive reputation of his family. “The Woods are known to be an honest, hard-working people. That is in my blood, but there is no shortcut to success. I work hard day in and day out.”

Gene also takes pride in hiring locally. All of his employees are local Texans, and three of them are family members, making Woods Tree Service a family business. Gene’s son Ashton is a Huntsville High School student who also works with his father in the summers. “He’s a very hard worker. It is important to me to instill that quality in him.” When asked if the family business will eventually be passed down to his son, Gene replied, “Maybe one day. It’s too soon to tell.” 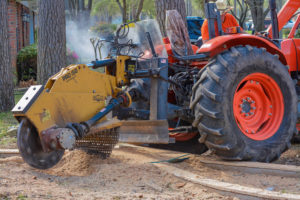 Spring is the busiest time of year for this company. As homeowners and businesses clean up their yards after winter, Woods Tree Service strives to be fully available to help whenever customers need them, including weekend work and even odd hours of the night. “I’ve gotten many calls in the middle of the night, or after a large storm comes through, when someone needs us immediately,” said Gene. “If, God forbid, a tree falls on someone’s house, we get there as fast as we can to remove the tree and use tarps to keep rain and mud out of the house. I’m always on call. The phone never stops ringing. I’m constantly multi-tasking, 24 hours, 7 days a week, 365 days a year. But it’s work that I love, and I wouldn’t have it any other way.” 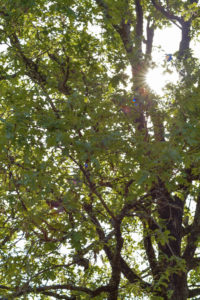 According to Jerry Edgin, Facilities/Maintenance Coordinator for Elkins Lake, “I use Woods Tree Service because of the quality of their work and the good pricing.  They always do a good job for us and I don’t have to worry about the finished product.  They are true professionals.”

One of the most challenging jobs Gene has had was the removal of a 200 year-old oak tree from McAdams Cemetery, surrounded by 200 year-old headstones. “One of the headstones right near the tree we were removing was my great-great grandfather’s,” explained Gene. “The tree was about 46 inches in diameter, and removing it required a very careful, technical process. I felt the pressure to perform without incident, not only for the cemetery, but for my own great-great grandfather.” Thankfully, Gene and his team skillfully completed the task without incident, and with much gratitude from the cemetery. 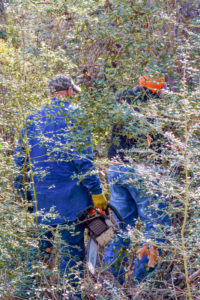 Woods Tree Service has many repeat customers, and Gene attributes that to his desire to get to know people and communicate effectively. Said Gene, “I like to stop in for a chat with my customers, and they like that I take my time with them. I can communicate with people where they’re at, at their level, and I think that contributes to our success as a company.”

Gene does not believe in contracts, but rather believes in people and being true to his word. “My reputation means more to me than anything,” he explained. “I’m not going to ask you to pay me until the job is done, so I do business with a handshake and a gentleman’s agreement. Do what you say, and say what you mean.”

Woods Tree Service works in Huntsville, Madisonville, Trinity, New Waverly, and Willis. Though he has considered expanding into a larger area, ultimately Gene wants to keep the company local, ensuring he keeps the quality of work high. “I only hire good, local, hard-working people,” said Gene. “I love that we’re a small, local, family-owned business.”

He laughed as he added, “With a name like ‘Woods,’ this was fate since the beginning!”