It’s 3:00 p.m. on a warm Saturday afternoon, yet The Big E-Z Crawfish and Oyster Bar is standing room only, much like it is all day, every day. Young and old alike, people come for great seafood — especially the owner’s spicy crawfish — and stay for the family-friendly atmosphere. Owners Erik and Reba Van Dorn, along with daughter Lindsey Lunceford and a host of family, friends, and workers, turned Erik’s love of cooking — especially crawfish — into the “blessing” that is their restaurant.

Before Erik and Reba married, Erik owned Big E’s Convenience Store at the corner of I-45 and Highway 75 by the Goree Unit, near the statue of Sam Houston. “We thought about how to make a living; we like hunting and fishing, but can’t make a living with it,” Reba said. “I come from a large family, and when I was younger, I thought it would be neat to own a restaurant. It wasn’t really my dream, but it was a thought, and I always wanted to do something working beside Erik.”

Erik, who grew up in Liberty, learned how to cook crawfish very spicy, which fast became a hit with his customers. So, with the proper permits in tow, he and Reba started cooking with two pots. A friend recommended starting with 15 sacks of crawfish — 500 pounds — which sold out the first day.

“Erik loves to cook, and is very good at it,” Reba said of her husband. “I love crawfish and love to cook them,” Erik said. “I’ve been eating them since I was a kid, and my grandmother, an excellent cook, introduced me to a lot of weird food growing up.”

“We started off just cooking on Saturdays (next to the convenience store),” Erik said. “Word spread quickly; I got 15 sacks the next day and sold out of those. We started in mid-April 2015, only on the weekends (weather permitting), and did that for three months. The next year, we came back with a tent and two picnic tables and began cooking on Fridays. That led to a lunch crowd.” As time went by, the two erected a carport cover, added a drive-through, and were up to 16 picnic tables. “We outgrew that, and it began to hurt my feelings when people would have to wait 45 minutes and then leave because we were so busy,” Erik said. Reba also said the effort of setting up and tearing down each night also became too much to handle.

Then two years ago, they sold the convenience store and purchased Zach’s Bar and Grill at their current location. Zach’s had been in business 30 years and was established, and Erik decided it would be a good idea to keep the cooks — Daren O’Bryant, Anthony Johnson, and Eddie Davison — so when people question what happened to Zach’s, it’s still there in spirit.

Evolution has been the hallmark of the Van Dorn’s journey — from the menu to the cooking process to the location. “When we moved in here, we had people ask if we sell anything other than crawfish,” Reba said.

“Our menu evolved with some of the stuff that Zach’s sold, and we built it to what it is today, with fried catfish, fried and fresh oysters, crab legs, chicken fried steak, chicken wings, shrimp, and fish tacos. We added a skinny burger for people who are gluten intolerant and added all-you-can-eat catfish for $9.99. During the offseason, we have a steak special on Thursday and Friday nights,” Erik said. “Everything Zach’s had is here; we just added our stuff. “I love everything spicy. I even keep a bottle of Tabasco on my desk,” Erik said. “I could have picked anything, but I love crawfish.”

The evolution also includes pasta dishes, the spicy chicken sandwich made famous by Zach’s, and of course, crawfish, but that season only lasts six months a year — January through June. During that crawfish season, the restaurant cooks about 1,000 pounds of crawfish a day, not counting live sales, and during any given weekend, about 300 pounds of sausage. Erik said all that cooking has also led to an evolution in the process.

“We have an aerated purging tank in the back, like a jacuzzi for the crawfish, which we do for an hour before cooking,” he said. “We have a sorting table set up to pick out dead animals and debris. We even designed and had fabricated a cooking table.” Erik said they have “evolved” from using commercial seasonings in their cooking to having their own custom blend made.

“We went to a company in Louisiana, and they’re helping us make a seasoning; we’ve tweaked it four times since October, and it’s still not quite where I want it, but once we get it where we want it, we’ll offer it commercially,” he said. “We process our own boudin and make our own dipping sauce — Reba Sauce.”

More than just a business

The Van Dorns see their venture, a family-friendly restaurant, as an investment in the community, which includes helping college kids. Reba said that, as of the last payroll, they have 70 employees. Additionally, they cater to a lot of fundraisers, such as Go Texan. “It’s a team effort; I take care of the back, and Reba takes care of the front,” Erik said. “We’re supported by our community, friends and new acquaintances, young and old,” Reba said. “We could not do this without our manager, without the employees that were here when it was Zach’s. We are blessed, tremendously blessed.”

Do You Know? Dr. Alisa White 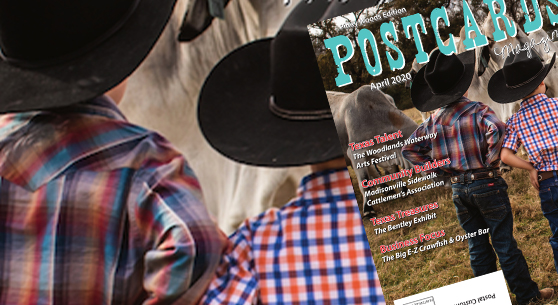