There is one problem many people in Texas have to deal with each summer—mosquitoes. The little pests are everywhere, and bug spray only helps so much. Thankfully, there is a solution to the problem, and that is the Mosquito Squad. This company has over 200 locations around the United States, including one in the Pineywoods and Lake Conroe area. Mosquito Squad is a part of the Outdoor Living Brands Franchise that includes other companies dedicated to helping “outdoorsy” people. Mosquito Squad claims to be America’s most trusted tick and mosquito control company.

The Pineywoods and Lake Conroe location was opened just recently in early 2017 by Paul Wheaton. Before opening the Mosquito Squad location here, Wheaton’s father-in-law had a misting system from another company that was intriguing to him. Paul worked on it with him for a few years and was inspired to do a similar type of work. Finally, last summer Paul decided to try to bring the Mosquito Squad to the Pineywoods and Lake Conroe area. Wheaton said, “One thing led to another, and I started the process, and it’s a lengthy process. You don’t just buy it and go; you have to go through a very long training. It took about three months of doing tests and answering questions.” 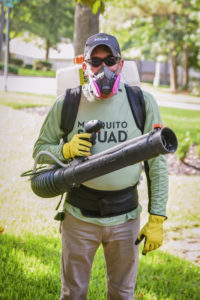 After his testing, Paul went to Virginia to train at the headquarters of Mosquito Squad. When all the training was completed, the location was ready to launch in March of this year. According to Paul, Mosquito Squad joined Outdoor Living Brands when mosquitoes would interrupt showing off lights to customers for another company in their franchise, Outdoor Lighting Perspective. Wheaton said, “The mosquitoes and annoying insects would come around and start biting everybody, which didn’t make it a very pleasant experience…so they came up with the Mosquito Squad.” Outdoor Living Brands also includes two other companies: Archadeck, a company specializing in outdoor living spaces, and Renew Crew, a surface restoration company. 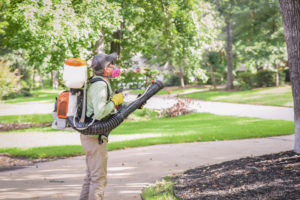 The process of mosquito prevention is a very interesting one. Paul wears a backpack with a built-in mechanism that looks almost like a leaf blower. The machine blows a mist that covers a specific amount of area. During the time I was there, I saw Paul cover a large amount of ground in only a short amount of time. He covered a few trees and several bushes with the invisible mosquito repellent. In a matter of minutes, the whole front of the house was protected from the small bugs. On the matter, Wheaton said, “We treat plants and trees where mosquitoes like to hide, because they don’t like heat and they don’t like sun.” He said that is why the irritating bugs bite most in the morning and at night. Thanks to Mosquito Squad, the mosquitoes around a customer’s house will drastically decrease. 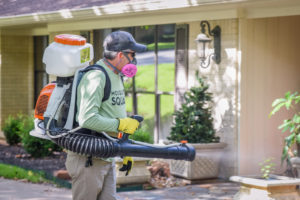 As the name suggests, Mosquito Squad primarily deals with mosquitoes. The mist used by the company affects mosquitoes the most because they will land on the repellent and eventually touch their face to eat and get poisoned. For this reason, other bugs like spiders do not get infected by the mist as they eat directly from their mouth. About other insects, Paul said, “It lasts 21 days and when the mosquitoes land, flies and stuff like that, they die. A spider, you can only kill on contact.” Though Mosquito Squad does not treat spiders, they still reduce the number of mosquitoes incredibly. There will be a very noticeable difference after receiving the service of the company. The spray will not always kill the bugs, though, as it is primarily designed to repel. The company will also make recommendations if other preventive measures are suggested. Mosquito Squad recommends their barrier protection spray program be done every 21 days all season long. This way, the customer can enjoy a mosquito-reduced home and also have less of a chance of getting a disease transmitted through the insect. 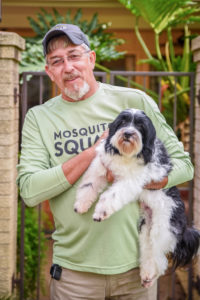 Mosquito Squad prides themselves in protecting loved ones, including pets, from the dangers of mosquitoes and other pests. With the barrier protection spray program, they will do just that. With the Pineywoods and Lake Conroe location, Paul Wheaton states that his favorite part about this occupation is in the relationships he forms with customers. “No doubt about it. When I schedule, I schedule for talk time. I’ve got city councilmen from Nacogdoches, I’ve got doctors, I’ve got chamber members here…they’re just good people.”

Wheaton’s large service area goes as far as Dallas. He said that the majority of the cities and places he services are rural, unlike some other Mosquito Squad locations. His “location” is actually just the Mosquito Squad truck, which has all that Wheaton needs to get the job done. “My territory is a lot bigger than some states,” he said. At the end of the day, the long drives are all worth it for Paul as he gets to interact with some interesting people and form new friendships.

One of the advantages the Mosquito Squad location in the Piney Woods and Lake Conroe has over its competitors is a no-contract system. “A customer can stop at any time if they want to do so—no commitment is required. With how well the product works, though, I doubt anyone will want to stop the program.”

Mosquito Squad also supports Malaria No More, a nonprofit global health organization aiming to end the disease in Africa. A portion of the proceeds Mosquito Squad earns goes to this organization and their fight against malaria, a disease that mosquitoes spread regularly in Africa. The company has raised over $200,000 since partnering with Malaria No More in 2012. Mosquito Squad has also distributed over one billion mosquito nets in Africa since 2000. All in all, this company is one that values not only its customers, but people all around the world.