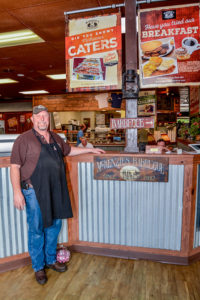 It’s about 2:00 p.m. on a weekday, but there is still a sizable lunch crowd enjoying slow-cooked brisket, sausage, and pork spareribs in the spacious dining areas of McKenzie’s Barbeque in Conroe. Darin McKenzie excuses himself from the kitchen and, still sporting his apron, tells the Postcards team about the McKenzie family’s Texas barbeque tradition.

A lot has changed since 1995, when Darin decided to leave his job as an accountant and open his own barbeque restaurant. He already had plenty of experience in the business—while he was in high school and college, he worked for his sister, Shannon Fell, a Bodacious Bar-B-Q franchise owner in Longview. His brother Kevin owns the McKenzie’s Barbeque restaurants in Huntsville and Madisonville, and—not wanting to compete with family members—Darin and his wife, Kathy, decided to open the newest McKenzie’s Barbeque in the growing Conroe area.

The original restaurant was just 2,200 square feet, and it soon became crowded with patrons who appreciated the McKenzie family’s commitment to quality, consistency, and excellent customer service. In 2005, Darin and Kathy enlarged the restaurant, more than tripling its size and increasing the seating from 70 to 230. At the same time, they added a McKenzie’s Burgers and Fries under the same roof. Then in 2009, the couple opened another location on Walden Road in Montgomery, just north of the Walmart Supercenter. Along the way, the McKenzies decided not to remain open on Sundays. 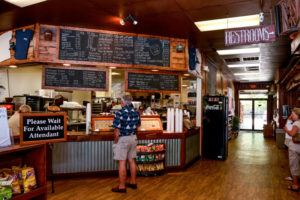 McKenzie’s Barbeque recently began another delicious chapter in its history by offering breakfast at both locations. It all started when the McKenzies’ pastor, Wes Pratt of Northside Baptist Church, asked Darin if the church’s Monday morning men’s prayer breakfast could meet at the McKenzie’s Barbeque in Conroe. Darin agreed, and also offered to cook breakfast for the men. After about a year, he decided to add a breakfast menu on Mondays through Saturdays to the entire community. “We were here working anyway. We might as well serve breakfast. Plus,” he says with a grin, “I like to eat it.” The breakfast menu includes such early-morning favorites as bacon, sausage, eggs, pancakes, breakfast tacos, and biscuits and gravy. 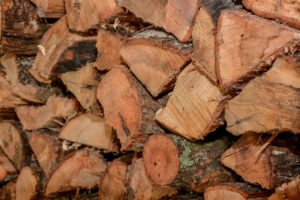 The McKenzie family is serious about its barbeque. Starting with only the best cuts of meat and quality spices, barbeque is slow-smoked up to 22 hours over hardwood fires. It’s always served fresh, and never cut until ordered.

Darin remembers conversing with a caterer who provided meals for electrical crews during the aftermath of Hurricane Ike. The caterer was so impressed with the quality and taste of McKenzie’s Barbeque, he subsequently invited Darin to visit his operation in Oklahoma as a consultant. “He said, ‘I want my food to taste like yours,’” Darin says. When he arrived in Oklahoma, Darin discovered that the catering company prepared all its food a day in advance, reheating it before serving. “I told him, ‘I can help you real quick: cook it fresh,’” Darin says. “It just makes a world of difference.” 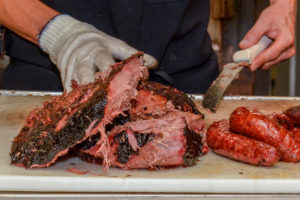 Although McKenzie’s tender, lean beef brisket is its top seller, people who like the restaurant’s ribs tend to make more noise. “Ribs are more what people talk about,” Darin says. “There is one guy who comes from Austin once a month on business, and he always takes a bunch of ribs back with him—he loads up the cooler. He drives past how many barbeque places? And he takes ours with him.”

The two-meat platter with sausage and beef brisket, however, is Montgomery resident Jim Hamilton’s favorite. Jim has been frequenting McKenzie’s Barbeque for 16 years, and says he appreciates the effort that goes into the food there. “Darin doesn’t cut corners. It’s slow-cooked on oak firewood. He gets there about 4 or 4:30 every morning and he doesn’t leave until about 4 or 5 in the evening, sometimes later. And he does it every day—except Sundays,” Jim says. “You can tell he cares what you think about his food. He wants you to enjoy it and come back.” 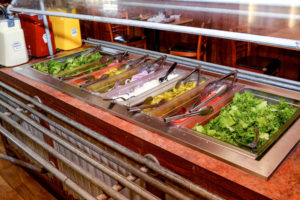 Now that breakfast is on the menu, Jim comes to the restaurant at least twice a week, and sometimes three times. He even has his own item on the menu: the Jim’s Special. “It’s four eggs—scrambled, only scrambled—two pieces of bacon, one sausage and a big ol’ biscuit,” he says.

McKenzie’s Barbeque has been featured in Texas Monthly and in Texas Highways magazines, and has won the The Courier’s “Best Barbeque in Montgomery County” award for 16 consecutive years.

Already, an impressive number of McKenzie family members are serving up good Texas barbeque in five towns. Darin’s brother, sister, and nephews are in the barbeque business, and Darin and Kathy’s son Colin recently decided to join the family business when he graduates from Louisiana Tech in two years. “He got a really good test this summer,” Darin says. “I broke my arm, then had rotator cuff surgery. He was here and watched things for me.” 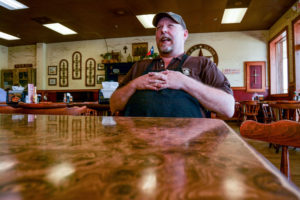 The McKenzie children have been a part of the restaurant since they were born. “Colin was born a month before we opened up,” Darin says. “He was here in Kathy’s arms or in a playpen right off to the side, or we were passing him off to customers.” When Colin was older, he had small jobs at the restaurant, as did his younger sisters, Lauren, who is now a freshman at Texas Tech University, and Abby, 10.

Whether they visit the original Conroe location or the newer one in Montgomery, whether they come for breakfast, lunch, dinner or utilize McKenzie’s Barbeque’s popular catering service, customers soon find that the McKenzie family is serious about serving good food. “When your name is above the door,” Darin says, “you tend to care about what is being served.”