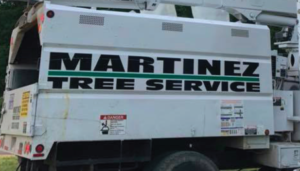 American families to reside in Huntsville. Joe A. Martinez, son of Joe M. Martinez Jr.and Maria Salome Martinez, is a full-time police officer for the Huntsville Police Department and also owns Martinez Tree Service. He was born and raised in Huntsville, Texas, and graduated from Huntsville High School in 1988. Shortly after graduating, he decided to go into construction with a cousin, but when business started slowing down, he decided to go to work for the Texas Department of Criminal Justice. In 1990, he began working at the Goree Unit, and in 1993, he transferred to the Holliday Unit. He worked there until 2005 when he joined the police academy at the University of Houston-DT and went into law enforcement. Soon after graduating from the police academy, he was hired by the Huntsville Police Department and has been there ever since.

Jose and Zenobia Martinez, Joe’s grandparents, came to Huntsville in 1929. Jose was the first Mexican to become a member of the Masonic Lodge of Huntsville. He and his wife owned Martinez Restaurant, which remained open until 1981. roughout the years, the Martinez’s have owned several local businesses. Joe’s father owned Martinez Auto Repair on Sycamore, and also worked for TDCJ for 23 years. His cousins, David and Moses, also owned their own businesses in Huntsville. David owned Martinez Garage, and Moses owned Martinez Gulf on 11th Street, and both owned their own wrecker businesses. Joe has two siblings; one is a graphic artist and lives in California, and the other lives in Lovelady and works in development. Joe also has a step-brother and sister. they both live in the Conroe area. Joe’s mother, Maria Salome Martinez, was originally from Los Ramones, Nuevo Leon, Mexico, where she lived until she married Joe’s father and moved to Huntsville in 1967.

Such business-driven predecessors explain Joe’s motivation for owning his own business. His interest in the tree cutting business began at an early age. He was only 16 when a couple of guys invited him to go with them to do a little “side job.” He went to help them out and became interested. His parents had rental houses, Joe recalled, and 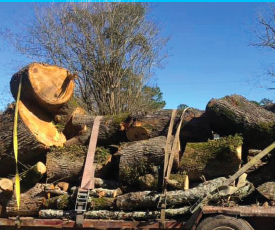 one day a tree had fallen on one of the rental houses. His dad had just bought a chain saw, and he quickly volunteered to do the job. From then on, he started doing side jobs, and over time, this quickly turned into a full-time business. Martinez Tree Service mostly serves Walker County as well as surrounding counties. They’ve had jobs as far out as Livingston, Lake Conroe, The Woodlands, Madisonville, and Normangee. “We’ll travel pretty much anywhere that borders Walker County,” said Joe. “I’m not a storm chaser,” he added, “but if we get called out to an area affected by hurricanes or tornadoes, we’ll go out to those locations; otherwise, I don’t make it a point to go out there…you catch people when they’re down, and I just don’t like that.”

Joe met his wife Angela through a mutual friend. At the time, he was still working at the prison and was also volunteering at the re department, so he didn’t have a lot of time for dating, but they started going out. then, he and Angela were married in 2007. they have two wonderful sons, Brandon and Logan. Until recently, they had always lived in Huntsville but moved to Magnolia in 2017. “Angela is a teacher and was working for Huntsville ISD. then she went back to get her master’s” said Joe, “and soon after, she found a job at Magnolia ISD. At first, she and the boys were commuting back and forth, taking the back roads, and were constantly running into hogs and deer crossing the road.” For this reason, they decided that it was better for the whole family to move to Magnolia. “Although we had been looking to stay in Walker County, we found a house there that met both our needs.”

Although managing both jobs can sometimes get hectic, Joe admits he loves doing both. On his days o from the police department, he focuses on the business end. According to Joe, he is blessed to have a great business manager that shares his business ethic, and a very reliable crew, so he doesn’t have to be hands-on all the time. “They all know their jobs, and I fully trust them,” Joe proudly stated. Much of his tasks are handled from home and over the phone. He tries to do all the bidding himself, the invoicing, and all the paperwork. After he takes care of 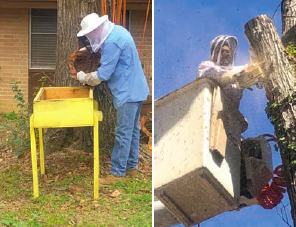 his end, he then sends the job assignments to 2 or 3 of his crew members, “to make sure we are all on the same page.” Martinez Tree Service does everything from commercial and residential mowing, tree cutting, firewood, stump grinding, gutter cleaning…” a little bit of everything,” said Joe. ere was a point in time he wanted to do bulldozing, so he purchased a bulldozer. He ran that for about 4 years, then he decided he had “too many irons in the fire,” so he sold the bulldozer. “As far as office space, we haven’t gotten there yet,” said Joe. His trucks are stationed at his old homesite where he grew up. He handles everything through his phone, emails, and his Facebook page: https://www.facebook.com/amartineztreeservice. “We go out and look at the job site, and quote a price. Estimates are always FREE.

According to Joe, Huntsville will always be his home. For this reason, it is important to him to give back to the community. Huntsville is also the place where his business got started. at’s the reason that purchasing all his equipment and insurance locally is one way he has been able to give back to his community. He also donates firewood to various local entities. “Until recently, I never advertised. I didn’t even have business cards. Everything was done by word of mouth, and it just grew.” Joe estimates that at least eighty percent of their business comes from Walker County. When some of the big apartment complexes were being built in Huntsville, they were hired to clear trees that were too close to the power lines, and when the city was working on the sidewalk project, they were once again called out to clear the right of ways for the sidewalks. they had to shut down a lane of traffic to clear those paths.

Joe also has a good network system with fellow tree cutters in the area, which is helpful when equipment is down. Currently, he has 6 employees, but in the past, he has had as many as 12 employees. On the weekends, he has 3 additional part-time employees. they are all experienced and insured, assured Joe. In many ways, Joe explained, “Trees are a lot like humans. If you cut your finger, you’re going to bleed until it heals. e same happens 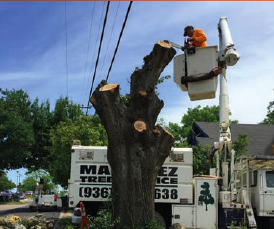 with trees. When you cut a branch, or a branch falls, it’s going to drip sap from that spot, until it dries up.” It’s important to keep that in mind when deciding whether or not to cut a tree down, but ultimately, “I leave it up to the customer to decide.” Sometimes trees that look healthy on the outside, are hollow on the inside. Once I examine the tree, I’ll let the customer know whether or not a tree is healthy. Rather than cutting a tree down, there is always the option to simply trim a tree to take o some of the weight and risk factors.

Overall, Joe hopes to be able to continue working at the police department for many years to come, as well as continuing to grow his tree cutting business.

Family life is very important to him, and he tries to spend as much time as he can with his wife and children. They enjoy several activities together, which include: going fishing, going out to the movies, and although his rotating schedule only allows him to be o every other Sunday, they attend church as a family as often as possible.

Tags:
Previous Article
Inspirations: Now I Lay Me Down to Sleep
Next Article
Publisher: Holidays are for Traditions & Additions