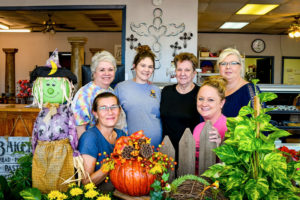 When she was a senior at New Waverly High School in 1984, Lisa DuPaul—a member of both the Future Farmers of America and the Future Homemakers of America—entered her homemade strawberry-cream jelly roll in the miscellaneous food competition at the Walker County Fair. Her concoction was the grand champion, and Lisa earned nearly $1,000 when Dale’s Auto Sales of Huntsville purchased it. “I was so excited,” she recalls. “Ever since then, I have just loved baking.”

For years, Lisa pursued baking only as a hobby. Early in her career, she worked for the City of Huntsville and later started a victims’ advocacy at the Huntsville Police Department, where she was the victim assistance coordinator for nine years. During that time, police officers often enjoyed cakes, cookies and other homemade items that Lisa baked and brought to work. “I like to cook for people,” she says. “It’s nice to see people smile when you give them something.” 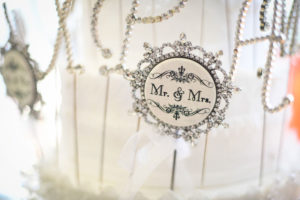 Free one-year anniversary cakes are a special bonus for using Heavenly Cakes and Flowers for your wedding cake.

In March 2017, Lisa turned her hobby into a business when she purchased a combination bakery-florist located between Sonic and Burger King on North Loop 336 in Conroe. In just a year and a half, she has renovated the building, upgraded her facilities and tripled her staff, resulting in a loyal following of customers for both floral designs and baked goods.

Some of the shop’s most enthusiastic customers are engaged couples, who enjoy the convenience—and the discount they receive—when they order both their wedding cakes and flowers at Heavenly Cakes and Flowers. Couples also appreciate free anniversary cakes one year later, which spare them from having to eat mushy, frozen cake on their first anniversaries. Many brides have taken the time to leave reviews on Facebook, where Heavenly Cakes and Flowers has earned 4.6 out of a possible 5 stars. “The flowers and cake for our wedding were so beautiful!” says one review. “Everything was gorgeous!” 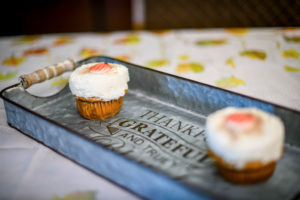 Heavenly Cakes and Flowers, however, makes much more than just wedding cakes. Customers often visit the shop to order specialty cakes for birthdays, anniversaries, quinceañeras and other special events. Each customer is unique, and so are the cakes. “Last week, we made a cake that looked like a baked potato,” Lisa says. Some customers bring magazine pages picturing intricate cakes; others show the bakery team photos on their smart phones. While most cakes can be replicated, many are surprisingly labor-intensive. In such cases, the bakery team quotes prices, as well as suggestions for making similar cakes that are less expensive to create. “It’s not the flour that makes a cake expensive, it’s the time you put into it,” Lisa says.

Jeanie Gates, who has worked at the shop for about 12 years, including years with previous owners, is more than just a cake decorator. She is also an artist, and she often handpaints her cakes. “We can’t say we do everything,” Jeanie says, “but we can say we do our best to try.” She also proofreads the lettering on cakes to prevent embarrassing mistakes. 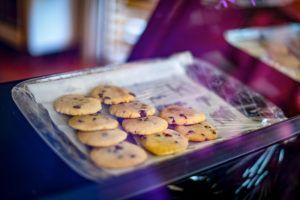 For Heavenly Cakes and Flowers, cookies and cakes are only part of their baking repertoire. They also do cupcakes, cake balls, and cinnamon rolls to order.

Some customers don’t need a special occasion to order cakes from Heavenly Cakes and Flowers. Some are just looking for cakes “like Grandma used to make.” One bride came to the shop to pick up her first anniversary cake and told Lisa, “Would you believe this is like my fourth or fifth cake I have had from y’all since my wedding? I just can’t get enough of your cakes.” Often, customers ask for old-fashioned German chocolate cakes. They’re in luck: the bakery makes three-layer German chocolate cakes with coconut-pecan filling, completely covered with icing. “We also make a German chocolate pecan pie that everybody just loves,” Lisa says. Other customer favorites are Lisa’s Coca Cola cake (her specialty) and Italian cream cake. “It’s Mom’s recipe that she has been using for years,” she says.

Many Facebook reviewers agree that cakes from the bakery are both beautiful and delicious. “I’ve seen a lot of beautiful cakes, and it seems they miss the mark on taste,” says one review. “Not the case here. Not only was the cake beautifully put together, but it was scrumptious!” Another review says, “Everyone still raves about how great the cakes were.”

Heavenly Cakes and Flowers is also known for its cake balls. They’re available in a variety of flavors, including German chocolate, pumpkin spice, chocolate-peanut butter, and red velvet. “During the holidays, during Christmas especially, we will sell 10,000 to 15,000 cake balls, hundreds at a time,” Jeanie says. While they are popular with individuals, companies also order them for office parties.

Customers have learned that Heavenly Cakes and Flowers has other tempting goodies every day, almost all made from scratch. “You never know what we are going to have that day,” Lisa says. The bakery even has chocolate chip and lemon cookies made especially for people on the Keto diet. “The lemon are amazing, and I’m not on a diet,” says Raquel Phillips, the shop’s floral designer. The bakery also makes Keto-friendly cake balls in orange, chocolate mint, and snickerdoodle flavors. 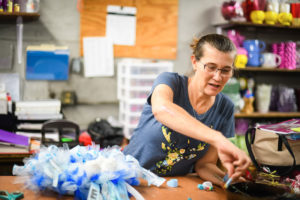 Lisa’s purchase of a combination bakery-florist had another advantage: it made it possible for her to work with her mother, Julia Pavelock. For years, Julia had a home-based business baking cakes and creating floral designs. Julia, who is a graduate of an intensive, month-long, seven-day-a-week course at the Benz School of Floral Design at Texas A&M, later owned a florist in Huntsville for a few years before moving into florist management. For about a decade, she managed Flowers Texas Style, a Conroe florist. In May 2018, Lisa purchased the business and merged it with Heavenly Cakes and Flowers, expanding its floral capabilities.

Just as they do when making custom cakes, designers work extensively with customers to create beautiful, memorable floral arrangements. “Every person is treated like the special person they are,” Raquel says. “We try to make them like family,” Julia agrees. “It’s sad to say, but even when we are here for families with their grief, we have been through it so many times, we can relate to the pain from grief,” Lisa says. “Getting to help them express their grief through funeral flowers, getting to design something that will be their last sentiment to their loved ones and being a part of that, is pretty important to us as a family.” 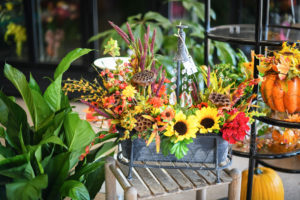 Heavenly Cakes and Flowers also has a great selection of plant arrangements and home décor items, as well as an enormous variety of homecoming mums. It even works with schools, churches, and restaurants, offering them wholesale flowers.

With her mother arranging flowers and her step-daughter, Rachael LeBlanc, working as bakery manager, Heavenly Cakes and Flowers is truly a family business. Even Lisa’s grandchildren Skylar, Wyatt, and Embree help by making cake balls and washing dishes.

The business treats its customers like family, too. “We are a Christian-based family, and we care about every one of our customers,” Lisa says. They are always pleased when customers are so happy they leave good reviews, like the one who summed up the business in just a few words: “Awesome people, beautiful work, phenomenal eats, fair prices, locally owned! What more could you want from a bakery/flower shop?”