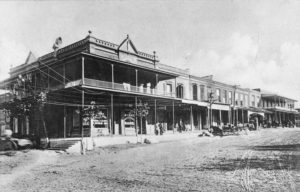 The first bank established in Huntsville was a bank before it was a bank. Prior to the late 1880s, when Huntsville’s Gibbs family acquired a national bank charter, the family provided private banking to townspeople at its mercantile store on the square. Services included safe storage for customers’ valuables, as well as short-term promissory notes to farmers, who repaid the notes at harvest time. One notable customer was General Sam Houston. 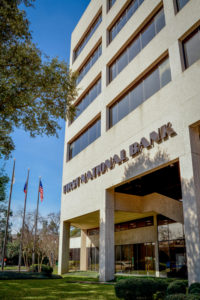 Gibbs National Bank, now First National Bank of Huntsville, has been in business for 127 years and proudly adheres to the same small-town values on which it was founded. A paramount goal is to provide an extraordinary level of customer service. “Our decisions are made locally,” says Sam Burris, chief executive officer and chairman of the board. “We have a full staff in deposit operations and loan operations. Turn-around times on credit decisions, I believe, are faster.” 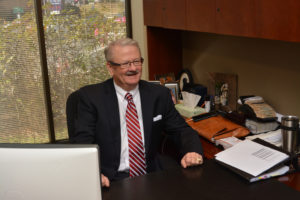 Sam Burris, chief executive officer and chairman of the board

While customers of First National Bank represent all ages, bank officers note with satisfaction that many Huntsville families have been customers for several generations. Still, their business is never taken for granted. “That is something we have to earn every single day,” Burris says. “Each location is well represented by a local bank president, assuring our customers we understand the individual and diverse needs of each community: Jim Coleman with First National Bank of Huntsville, Jerry Pipes at Crockett Bank, Jerry West with The Bank of Madisonville, Randy Rhodes at Robertson County Bank and Lance Lindsey with Brazos County Bank.” 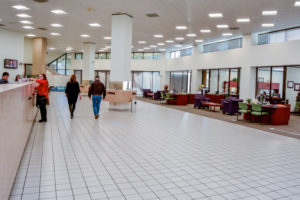 Over the past few decades, banking has become more convenient to customers, Burris says. When he first joined the First National Bank team 25 years ago, most customers routinely came inside the bank to conduct transactions. “Then people migrated to the drive-ins, then ATMs, then telephone banking, and everybody thought that was high-tech. Then internet banking came along and now mobile banking.” Although the bank continues to implement newer technologies, older ones still remain in use for those who prefer them. Burris notes that, while younger adults typically adopt new banking technology first, a surprising number of older bank customers have learned to love new banking methods, such as online banking.

For example, Brenda Yancy, vice president and lobby services supervisor, says many tenured banking customers have switched to debit cards after writing checks at establishments where checks were scanned and handed back. “They said, ‘if they are going to give me my check back, I might as well use a debit card,’” Brenda says. To help customers take advantage of new banking technology with confidence, bank employees provide easy-to-follow instructions. 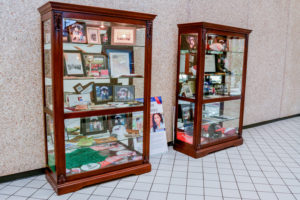 Even when customers need to take care of routine transactions that could be handled with newer banking technology, however, it’s not unusual for them to come inside the bank. Burris attributes this phenomenon in part to the people who work in customer contact positions at First National Bank. “They are a terrific team, and they genuinely like our customers,” he says. “One thing I hear a lot is that people enjoy being in our lobby and don’t feel intimidated when they are here. I take that as a huge compliment.”

While most customers appreciate the friendliness and efficiency of bank personnel, many learn the full extent of First National Bank’s commitment to customer service when they need a mortgage loan. Many banks have stopped offering mortgage loans because of the increased regulations since 2008, Burris says, but First National Bank has continued to provide this important service. “We have stayed in it. We have been in it since day one,” he says. “There is more documentation now related to compliance with the new laws and regulations, but we have great experience in that type of business. 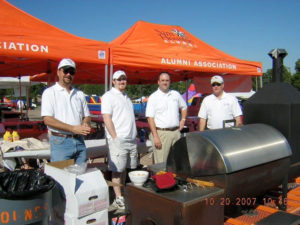 Our loan origination department has very talented people in it. We work with attorneys, title companies, and others on a daily basis.” As a result of this personalized attention, he says, the application and approval process for mortgage loans can often happen quickly. “If there are any hiccups in the process, a local lender has a real advantage over an internet process.” 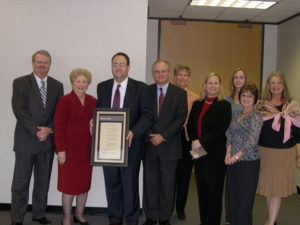 When Gibbs National Bank (named in honor of Sanford Gibbs) officially opened for business on January 14, 1890, it was located next door to the mercantile store at Cedar and Jackson Streets, now known as 11th Street and Sam Houston Avenue. One of the founders was Sanford’s widow, Sallie Gibbs, who, as a major decision-maker in the day-to-day operations of the bank, was ahead of her time.

Willbourn Gibbs, Sanford and Sallie’s son and the first president of Gibbs National Bank, noted that the bank practiced “conservativeness tempered with liberal treatment of worthy patrons and legitimate help to legitimate local enterprises”—a practice that is still in existence today. First National Bank of Huntsville has sponsored many worthwhile organizations over the years, says Jennifer Davis, vice president and marketing officer.

One way the bank supports the community is by helping teenagers learn how to manage money. First National Bank sponsors a computer-based course that Huntsville High School students take as a part of their required economics classes, and the bank might extend the program to elementary and junior high students in the future. The course helps students learn how to handle their personal finances, Davis says, and touches on such topics as credit and student loans. First National Bank also works closely with Sam Houston State University’s banking school and its alumni association. In addition, the bank supports the university through multiple sponsorships.

For another glimpse at the First National Bank of the past and present, ask one of the handful of employees who have worked more than 20 years at the bank, such as Brenda Yancy who has 42 years of service, Debbie Woods (39), Vickie Smith (39), Cindy Matchett (37), Kay Fountain (37), Jerry Pipes (35), John Sanders (32), Lorri Lehman (32), Debbie Holland (31), and Walter Bennett (26). “Jim Coleman, our bank president, has been here for 24 years and plays a major role in our success,” Burris says. “Jim is very involved in our community and bank management and lending to local businesses.”

While First National Bank of Huntsville has deep roots in Walker County, it has continually widened its circle of customers. “We have continued adding locations to better serve our customers,” Burris says. “We have bank locations in Crockett, Madisonville, Franklin and Bryan/College Station, with plans to break ground on a brand new bank building this spring in Bryan/College Station. Our shareholders and board members are extremely supportive of the bank and are very forward thinking for our future growth and expansion.”