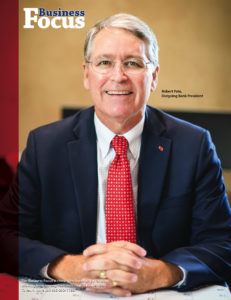 First Financial Bank has been serving Texans for more than 127 years, surviving the Great Depression, the economic collapse of the 1980s, and the Great Recession. It’s no wonder the bank is recognized as one of the nation’s top performing banks and has long been trusted by the Huntsville community. With 72 locations throughout Texas, First Financial offers the benefits of a large bank, while retaining the personal touch that comes with banking locally.

Current (and soon to retire) bank president Robert Pate has been at the Huntsville branch of First Financial for seven and a half years, with 21 years total with the banking organization. Graduating from Texas A&M with a degree in Economics, Pate’s banking career began as an examiner for the state of Texas. “That was the best way to learn the bank from the ground up,” said Pate. “I learned the whole bank: accounting work, the vault, loans, ledger balance—every part.” 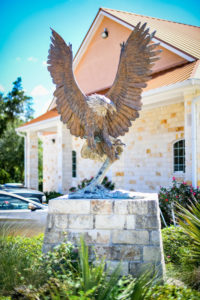 From there Pate worked at Texas Commerce Bank until he accepted a position with First Financial Bank in San Angelo in 1997. He transferred to First Financial in Huntsville in 2011, assuming the position of branch president. ”I would have never thought to move to Huntsville, but it has been great,” said Pate. “We love the community, the people, and I love the bank employees and board of directors. This is where we plan to stay after retirement.” Pate takes pride in involvement with the community, including First Financial’s relationship with Sam Houston State University’s School of Banking. Doctor Jim Bexley from the SHSU School of Banking crossed paths with Pate when they worked for different branches of Texas Commerce Bank. Now Bexley and Pate serve as advisors on each other’s boards at the bank and university, respectively. “Everyone at the university is first class,” said Pate.

Pate’s wife Mary is a retired ESL Algebra teacher at Huntsville High School. She continues to work as a teacher’s aide because of her love of teaching. Between them they have five children and two grandchildren. “I am an Aggie. I bleed maroon,” said Pate. “But when you move to a new community, you embrace that community. Now we are Hornets! We are Bearkats!” Pate added, “I have been fortunate to work for two wonderful banking organizations in my career. Right now, I believe I work for the premier banking organization. First Financial is a wonderful place to work. I am very blessed. And Kirby Cason is a perfect fit for the future of this bank.” 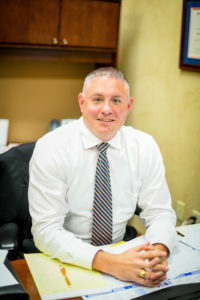 Kirby Cason is a Huntsville High School graduate, class of 2002. He graduated from Sam Houston State University with a finance degree in 2007, and he had no initial plans to pursue a career in banking. “I remember sitting in Dr. Bexley’s commercial banking class and feeling so nervous during loan presentations,” Cason said. “I thought, ‘Banking is not for me.’” Despite that initial impression, Cason started working for First National Bank in Huntsville, working his way up from teller to the backroom to operations to a loan officer. Cason was offered a new position at First Financial August of 2018, and he will replace Pate as president upon Pate’s retirement at the end of the year. “I loved my time at First National. I learned so much from my mentors there,” said Cason. “At some point, you have to prove to yourself that you can do more. This is my opportunity to stand up and implement things for the future of First Financial.” Cason and his wife Susan have a four-year-old son named Ross. Cason’s parents, Dick and Ann, also live in Huntsville, as well as his sister and his twin brother Kendall. Cason said with a laugh, “I’ve learned to always disclose that I have a twin. It’s a small town, and there have been many times people have seen Kendall thinking it was me, and have been offended that I didn’t acknowledge them. Now I disclose that information up front to avoid any problems.” Having roots and family in Huntsville, Cason is glad to remain a part of the community that has been so good to him. 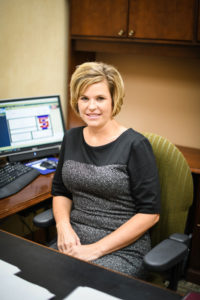 Both Pate and Cason credit the smooth daily operations of First Financial to Executive Vice President of Treasury Management Michelle Murray, who has been with the branch for 15 years. “Michelle makes this bank run,” said Cason. “She has a wealth of knowledge of banking in general. She can recite policy and procedure word for word.” Murray loves interacting with customers and sees fellow employees as her second family. “If you take pride in where you work, you make sure it’s taken care of,” said Murray. “It is a good feeling to help someone make their business run better.”

First Financial boasts top-of-the-line technology, including their own IT department, a mobile app, and programs to download financial information directly into Quickbooks. They also issue debit cards on site, including custom designs like Sammy Bearkat and First Responder cards. “It’s a huge plus to get your card immediately rather than waiting 10 days for it to arrive by mail,” said Murray. 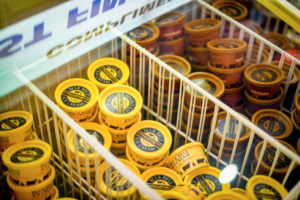 First Financial takes every opportunity to give back to the community. They are proud to partner with Sam Houston State University for First Financial First Downs at football games. They proudly support other local organizations like the Care Center, Meals on Wheels, the Senior Center of Walker County, the Boys and Girls Club, and buying animals at the Walker County Fair.

A favorite tradition at First Financial is ice cream Fridays. The bank’s main lobby has a large cooler stocked with Blue Bell for all customers to enjoy. Murray said, “If your bank doesn’t give you ice cream, you’re at the wrong bank!” 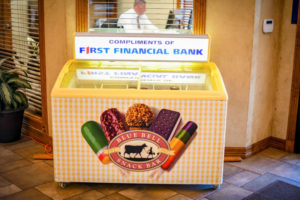 Monday, October 8th is First Financial Bank’s fourth annual company-wide day of service. They will be cooking barbecue, sausage, potato salad, and rolls for firefighters, police, EMTs, and park rangers. They plan to serve 220 meals to first responders in Huntsville and New Waverly. An additional 100 meals will be delivered to the Senior Center of Walker County. “It’s a national holiday, so the bank is closed, but everyone still comes in and participates. We all look forward to this day every year to give back to our community,” said Murray.