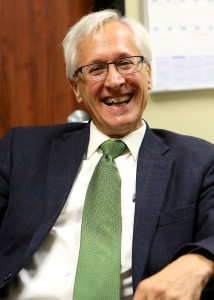 The town of Wilburton, Oklahoma cultivated a young man into a caring optometrist who would settle down in New Waverly and set up a practice in Huntsville. The parallels between Wilburton and Huntsville made for an easy transition into this community. The Oklahoma State Penitentiary sat only 30 miles east of a municipality surrounded by the Ouachita National Forest, and at an institution of higher learning, Dr. Stephen Means’ father held the position of vice president. After spending two years at this junior college, Dr. Means attended Oklahoma Baptist University. Following graduation with a degree in music with a vocal emphasis, along with a trumpet and piano minor, he began seminary, where he discovered his path would not lead to a ministry confined within a church. Even as a junior in high school, Means possessed an interest in lenses and the eye. His science fair project, The Mathematics of Light Refraction, won the Oklahoma Optometrics Auxiliary Award. “I’ve just always loved the eye!” he stated. 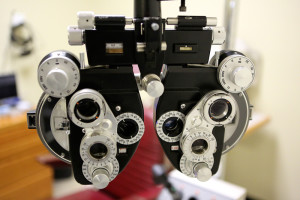 After Dr. Means met an optometrist named Keith Davis, he realized his caring heart would better serve the populace as an optometrist versus an ophthalmologist. Davis took this young man into his office and shared his craft. Davis’ enthusiasm led Means to evaluate his purpose in following a course towards optometry, “Everything he said just rang true. I am more interested in primary rather than secondary care. I am less interested in surgery than I am in taking care of a broad spectrum of patients.” In 1991, Dr. Means graduated from the University of Houston. Although he planned to move back to Oklahoma, he accepted a job offer in The Woodlands. 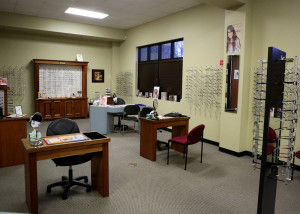 In October 1993, Dr. Means opened up for business in Huntsville, which felt more like home than the cosmopolitan bustle of The Woodlands. “Huntsville has been very, very good to me,” Dr. Means shared as he leaned back in a well-worn, duct-tape-repaired chair that has been with him since the beginning.

His 5,000 square foot location houses three exam rooms, a contact lens area, three preliminary/special testing rooms, and business or private offices. A lab also exists on the premises, where the staff performs edging, or cutting the lenses to fit into frames. Office Manager Bob Lewis manages 12-14 staff members; everybody is cross-trained. There are doctor’s assistants, front desk personnel, staff members who work in the lab, and employees who complete the billing and business details. 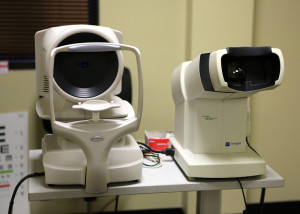 “People say that ‘the eyes are the window to the soul’; the eyes do tell you a great deal about a person’s health. You are able to visualize vasculature issues without making an incision. The neural tissue is like a direct line to the brain. Certain things that occur in the brain will have an effect on the eye,” shared Dr. Means as he related a story of a young lady and his hand in helping to identify the reason behind her blacking out. She visited the office for a routine eye exam. Moments into the exam, it was discovered that she had a brain tumor based on the appearance of the optic nerve in conjunction with the symptoms she was experiencing. “We sent her from our office to get a CT scan…she had a malignant brain tumor. The day after I saw her, she was having surgery for a large mass that was also infiltrative. I sent her a teddy bear balloon bouquet to let her know we were thinking of her and praying for her. We kept in touch a little, but then I moved up here. One day out of the blue, I received a teddy bear balloon bouquet. 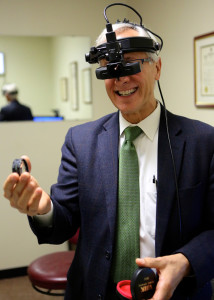 The card said, ‘Dear Dr. Means, I am ten-years cancer free, and you are the first person I thought of’…That set the stage for me to understand what I do is more important than prescribing glasses and contacts,” this humble optometrist reflected.

Eye doctors can be the first to detect a number of medical conditions that are not ocular issues—such as diabetes, renal failure, leukemia, lymphoma, lupus, and Crohn’s disease.

Stephen Means is very much a family man and has shared his journey of being an independent practitioner with his wife of 32 years, Lynise, and their four children: Grayson, Amanda, Grant, and Andrew. After crossing paths with Lynise for a second time, they began dating. Means asked her to marry him after only five weeks of going out. Although Lynise is a registered nurse, she has chosen to stay home and homeschool their offspring. Grayson recently graduated from SHSU. Amanda is a Bearkat senior, while her brother Grant started at Sam this year. Andrew, the youngest, will be completing his high school homeschooling experience this year. 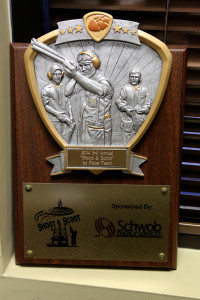 Recently, Dr. Means chose shooting skeet as a hobby. Throughout his career, he has assisted patients who were cross-dominant, possessing a dominant hand and the opposite dominant eye. This condition makes it difficult for people who hunt or participate in target practice to aim efficiently. Since he is cross-dominant, Means thought he would not experience much success in this sport; however, he has proceeded up through the ranks quickly. “We’ve had patients bring their sidearms in, and we would hold up lenses and find out what works best for them,” Means revealed laughingly. 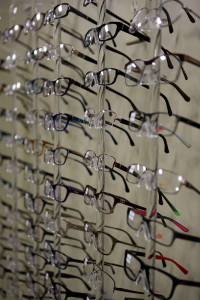 Whether one is two years-old or 102, Dr. Means aims to assist our community and has met various needs by stepping outside of the office doors. He has been willing to make house calls for patients who are bedridden. At times, it is difficult for some customers to step out of their vehicles; thus, this caring optometrist takes his tools and craft out into the parking lot. “We like people; we like investing in people…I like talking to people, making little side notes, finding out how the new grandbaby is doing, or their daughter is getting married. This is not a profession for people who don’t like people… Sometimes we have patients who come in and, more than anything else, they just need to talk, and that is okay,” commented Means. On Christmas Day, this committed doctor took care of a patient who had suffered a corneal abrasion from being awakened on the holiday by the family’s Boxer dog. Dr. Means enjoys working with every facet of our community’s residents, every person. “Working with various members of the population requires a certain degree of creativity and flexibility. There was a young man who would ‘climb a mountain for a Coca-Cola’. 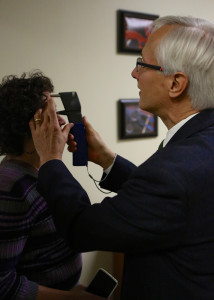 We sat him down 40 feet away. I held up a can, and I started moving towards him. I called his name and said, ‘Hey, buddy! What have I got here?’ As soon as he recognized it as a Coke, he got on his feet and came and got the soda. We measured the distance, measured the size of the Coke can, and calculated the visual acuity based on the math,” described Dr. Means.

Dr. R. Michael Prince works with Dr. Means in this practice. Prince graduated from Bryan High School and completed his undergraduate work at A&M. After finishing his degree in Optometry at SUNY (State University of New York), he returned to Texas. He has been working with Dr. Means for about eight years.

Whether you are in need of new glasses, contacts, or a yearly vision test, you will have your vision needs met, your soul refreshed, and a smile applied to your face. Your visual needs are their priority, your total health is their concern, and your well-being drives them to excel in their field.

Tags:
Previous Article
American Goulash
Next Article
A Day in the Life: A Compounding Pharmacist

A Day in the Life: A Compounding Pharmacist
Ruth Fields January 29, 2016