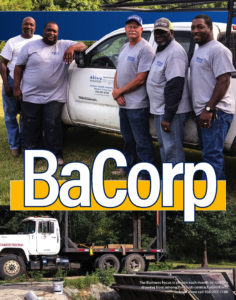 Story and Photos by Trace Harris

Nate Grigsby can best be described as a jack-of-all-trades. He is the owner of BaCorp Wastewater Treatment and G2 Construction. Among other things, Grigsby is also a licensed mortician. He is always busy, but always has a smile on his face and a laid-back demeanor. Grigsby likes to joke, “I am lucky to have three careers which people will always need.”

Grigsby comes from a family of concrete layers. In fact, he is the fourth generation in the trade and grew up doing it. However, Grigsby had bigger plans. BaCorp Wastewater Treatment was founded over 35 years ago by Wendell Baker, Sr. The name BaCorp is play on words with the last name Baker. Baker’s son would take over later, but would retire, and a year and a half ago, Grigsby became the owner. One Baker son still works at the company.

Prior to owning BaCorp, Grigsby owned and founded G2 Construction over 18 years ago, when he also became a mortician. “Learning the wastewater trade has been a learning experience. I grew up in construction, so operating G2 was natural. Looking at a wastewater system, I thought it was simple, but there is a lot to it. I feed off my guys,” said Grigsby. BaCorp has manufactured wastewater systems for years, and owning both companies has been beneficial. 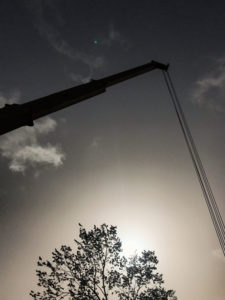 Most people know little to nothing about the systems which dispose of waste. When there is a problem, we are reliant on companies like BaCorp. Grigsby helped explain the ins-and-outs of the systems, “We have several types of systems. Aerobic systems are common; there are conventional systems, low pressure dosing, and treated drip field. Every home is required to have a wastewater system. For the most part, they do the same thing, but aerobic systems treat the water outside of the house. They are basically mini-sewer systems.” 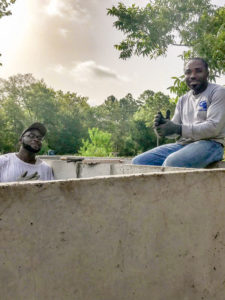 To stay in compliance, BaCorp must carry licenses for seemingly everything. “We need licenses for everything we do. You need a license to install systems and another to maintain them. I am getting my sanitary license right now,” Grigsby said. BaCorp also must comply with the Environmental Protection Agency (EPA).

There are a lot of steps to stay in compliance with the EPA. Grigsby explained, “Among other things, we have to make sure the treatment process and chemicals like liquid chlorine are at the right levels. If the levels are not right, the process can be bothered, which may harm the microorganisms which naturally breakdown waste. We also have regulations as to where we can spray the treated water. We can’t spray the water within 100 feet of a well. We also can’t spray near edible trees or gardens, and we must stay clear of ponds and rivers. We are very environmentally conscious.” Taking responsible steps to protect the environment has been a staple of BaCorp since the beginning. 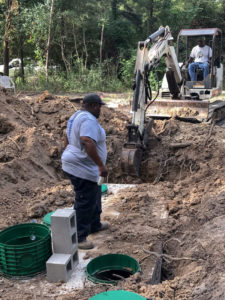 Since 2004, Grigsby has been building houses. Pictures of his various projects are on G2’s “Houzz” webpage. Grigsby has found a way to incorporate both businesses into homebuilding. Before many homes are built, a wastewater system must be installed. Grigsby explained the process, while onsite of a future home, “Before we start the building process, we need to know where the customer wants their house, so we can figure out where to install the system. We then need to determine whether it is a well or on city or county water. Next, we must install the electric. We also need to know the size of the property; there is a lot of math involved. We then test the soil, which helps us determine the type of system to use. To test the soil, we put a rod into the ground. We are then able to determine whether it is rock or clay, which are common in Walker County. Clay is a big red flag to us. When we see clay, we will usually go with an aerobic system, but sometimes you can use a conventional system.”

Grigsby is quick to give credit to his staff for his success. Grigsby explained, “We are a family-oriented business. We are really one big family here. We look out for each other and help each other get better. My staff has helped me learn and made me better. We like to make the office and worksites exciting and fun to come to. Ms. Kathy, our office manager, basically runs the place. She will say, ‘Do this, not that, cut this check.’ She lets me know what is on the calendar for the day. She even trained my wife, who works here now. We cover Walker, Montgomery, Grimes, Madison, and Polk counties, and we have an impeccable reputation in each. I give my staff credit for that—they are excellent at customer service and friendly to all our customers. Everybody knows what they are doing, and they take pride in their work.” Grigsby had a big smile when talking about his staff. 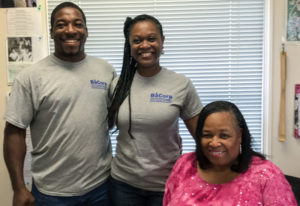 Grigsby has managed to build one company from the ground up (literally) and incorporate another. Grigsby has only owned BaCorp for one and a half years, but he has managed to maintain the same relationships while building on the business. Both G2 and BaCorp are A+ rated by the Better Business Bureau (BBB). BaCorp was also rated #1 in customer service and quality. They managed to build 34 systems in one year.

Grigsby has a simple philosophy to business, “It is all about service and helping people. In all three professions, it is relevant. More than anything, I am grateful to the Baker family for giving me this opportunity. I cannot thank them enough.”