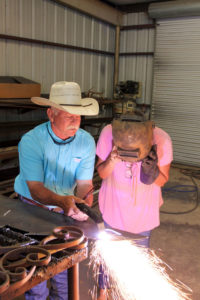 For this month’s Business Focus article, we drew from the list of advertisers a special artist whose work has been documented before as a “Do You Know” feature in the debut issue of Postcards Magazine. Jeff Sullivan, a metal artist out of Anderson, Texas sat down with Postcards in his home to talk about his business, A Little Bit Western, and the steps he has taken with it since our last visit with him years ago.

Jeff Sullivan’s ventures with metal art began circa 1995, when he started working with metal at his coal-mining job during the graveyard shift, drawing a picture by hand and cutting it out with a torch. He had always enjoyed drawing, he says, but couldn’t have imagined where he would one day end up by applying that talent to metal. After college, he went to work at the coal mine in Anderson, where he had access to scrap metal to experiment with. Before starting out on his own, he began working and cutting his first pieces out of a friend’s roping shop in New Waverly. 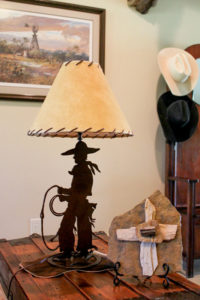 He began to display and sell some of his earliest work at the local roping, and it all went from there. It started out as a hobby, making pieces for himself and as gifts for friends, but it didn’t take long for the orders to start coming in. It was a slow process starting his own business and acquiring the shop full of materials needed for the work, but with time, custom orders started trickling in and brought him to where he is today.

On a 50 acre ranch sets his Austin stone house, adorned with cedar posts and western-themed décor. In the front yard of their home of 12 years are his 16 dogs—literally. One of his additional pastimes is raising dogs, an acquired passion he has been doing most of his life. On their little piece of Texas heaven surrounded by a lake, he is accompanied by Carol, his wife of 19 years, and his daughter Claye. Carol has worked at Community Service Credit Union in Huntsville for over 30 years, and their daughter Claye has added her own décor to their home with her many shiny rodeo buckles. She plans to attend Sam Houston State (like both her parents did) and has wanted to be a Bearkat for as long as she can remember (Eat ‘Em Up!). 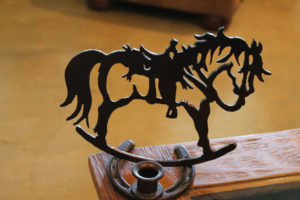 His entire life, Jeff has spent much of his time working cows, riding horses, and doing cowpoke work for hire; and due to this lifestyle, most of Jeff’s pieces are influenced by the western world. After selling some of his work in a friend’s booth at HLSR, and entering the NFR vendor world, connections were made and word spread. His metal art career was especially jump-started at his booth at the National Finals Rodeos, with people casually coming by his booth, like Tom Selleck and Jeff Foxworthy. His western-themed artwork was in the right crowd to say the least, and his name started to spread like wildfire. His first year as a vendor went great, and after 7 or 8 years of setting up a booth at the NFR, he had earned plausible name recognition and was shipping to customers outside of the country. 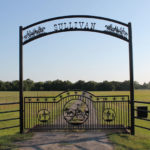 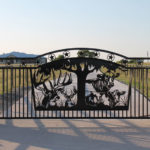 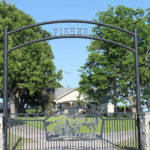 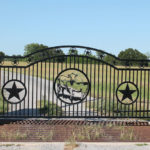 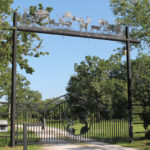 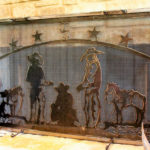 Present day, Jeff works making custom pieces by order. His attention to detail is just as important in a 16 foot wildlife-themed gate as it is in a bucking horse lamp stand—and his range is incredibly unlimited. Per customer requests, Jeff has created bar stools, wine racks, fire screens, cattle brands, lampstands, staircases, balconies, horseshoe artwork, and coatracks. But among all his ventures, his favorite piece to create is a centerpiece for a gate. He loves the challenge of receiving a customer request, especially when it is something unique or special to the customer. He rises to the occasion every time, creating a scene that comes alive and looks so real you can’t believe it’s metal. 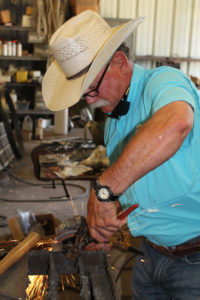 He gives us a peek in his shop by request, and the process is even more of a doozy than you’d imagine. Jeff’s primary metal of choice is 3/16” plate carbon steel and is hand cut by Jeff with a handheld plasma torch (which is not the equivalent of drawing with a pencil, in case you didn’t know). He draws a scene in soapstone onto the metal before cutting it out slowly and steadily, creating clean lines with compressed air. Each piece can be customized further by being powder-coated in any color and sealed to last. Some of his famous customers include Chuck Norris and Lance Berkman of the Astros, whom he crafted a large entrance for.

Jeff and his daughter drive us around in his pickup to show us some of his gate work in front of a few of the neighboring homes. We move alongside green pasture, every few minutes or so stopping to see one of the front gates, some western scenes, some serene pictures of cattle, and a few with brooding whitetail deer, their antlers beautifully detailed. While riding in the back of the pickup, I flip through a portfolio album of photographs taken since he began the craft in the 90s. Hundreds of pieces, countless hours of work, and an incredible legacy all are represented within the red leather bounds of the photo album. 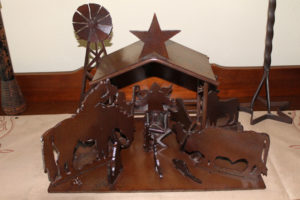 A special piece to him from the past is a gravestone he made for a passed husband, with a scene of the man that turned out so beautiful it brought the widowed woman to tears. For his daughter, he made a buckle rack to display her plentiful hard-earned rodeo memorabilia. Another favorite of his is a 3D nativity scene he created by a customer’s suggestion. It was a challenging feat, but the result sits proudly in their front room as a display of their faith. One of the more memorable requests over the years was the order to make a custom branding iron for California Chrome, a star horse running for the Triple Crown at the time.