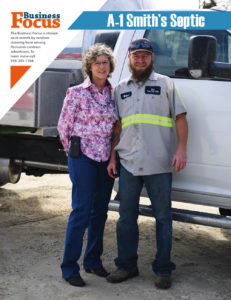 On an ordinary day in 1989, Nancy Smith’s late husband Doug Smith accidentally ran over a septic tank with his dump truck, breaking the lid. Dirt rained down into the tank, and Doug knew he needed to get it pumped out. Unfortunately, he soon discovered that septic tank pumpers don’t like to pump systems that have dirt in them. The dirt gets in the pumper’s tank and is difficult to remove.

Doug called many vacuum truck operators trying to solve the problem. One man told him he was no longer in the business, but offered to sell him a vacuum truck. That sounded like a good idea to Doug, and before long, his septic service was open for business. The company’s name evolved and now, about 30 years after its unlikely beginning, is known as A-1 Smith’s Septic Service, Inc.

The company has grown larger than the Smiths ever imagined. Nancy and husband Milton Widner now run A-1 Smith’s Septic, an operation that has 18 trucks and 25 employees, “People tell us all the time, ‘I saw your truck the other day,’” Nancy says. “They don’t know we have 18. They think it’s just one truck.” 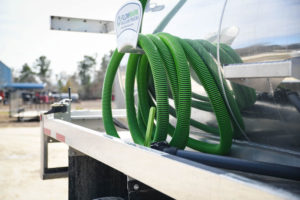 Over the years, the company has served many customers, including many who wish they’d had their septic tanks pumped out sooner. Both aerobic and conventional septic systems have trash tanks that should be pumped out every few years; however, the A-1 Smith’s Septic team has learned that most people either aren’t qualified to judge when a tank needs to be pumped out, or do not have the inclination or desire to check. Often, they procrastinate and do not schedule pumping until it’s too late. “Once that trash tank becomes full of sludge, things in the house start backing up,” Nancy says. “Toilets start gurgling, and showers won’t drain properly. Suddenly, you’re in a disaster zone.”

Some of A-1 Smith’s Septic’s customers have learned the proverbial “hard way” that it’s better to have septic systems pumped out too soon rather than too late. One customer with a large family had such a negative experience with overflowing toilets, he calls A-1 Smith’s Septic to pump out the family’s septic system twice a year.

Waiting too long to have a tank pumped out is more than inconvenient—it can also be costly. Infrequent pumping can cause the field lines on conventional septic systems to fail, and can cause the pumps and air compressors on aerobic systems to burn up. “The price to replace them is outrageous,” Nancy says. “You can pay to keep your system maintained, or you can pay later. If you maintain your septic system, it won’t become a problem.” Some customers are lucky: A-1 Smith’s Septic operators can sometimes clean out over-full tanks and fix the problem with minimal damage. Other customers are not so fortunate. Some customers have had to replace their entire septic systems.

Regrettably, not all septic system installers advise customers that their septic tanks need to be pumped out on a regular basis. “They put it in the ground, pat you on the back and say, ‘Start flushing,’” Nancy says. A-1 Smith’s Septic, however, strives to educate its customers so that their septic systems will run efficiently for years. It’s important to note that while aerobic system owners are required to have service contracts and quarterly inspections, inspectors don’t always issue warnings about nearly-full tanks. “The only part of your system that they are required to maintain is the treatment tank and the pump tank,” Nancy says. “They are not required to open and look in the trash tank.” 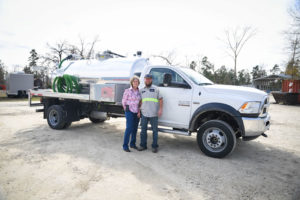 After about 30 years in the business, Nancy has many helpful nuggets of advice for customers. For example, she suggests having septic tanks pumped out before company arrives for the holidays. “If you are planning to have a lot of company, don’t wait until the middle of Thanksgiving dinner to call,” she advises. Fortunately, A-1 Smith’s Septic can provide next-day service, and sometimes same-day service if calls are received in the morning. As an added bonus, she says, “We have an office staff that answers the phone instead of a machine or a guy driving down the road in a truck.”

In 1996, Doug and Nancy bought ten portable toilets. Throughout the years, as Walker and surrounding counties—and their fairs and festivals—grew, so did the demand for portable toilets. The company responded, adding trucks and drivers; in 2008, it opened a satellite office in Lufkin to help meet the growing demand. 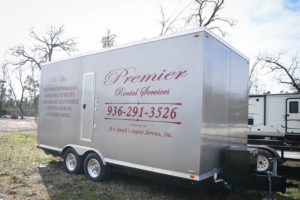 A-1 Smith’s Septic now provides portable toilets to 26 counties. “We are the largest portable toilet company in deep east Texas between Houston and Dallas,” Nancy says. In addition to equipping construction sites with portable toilets, A-1 Smith’s Septic has an event trailer, complete with flush toilets, sinks, heating and air conditioning. It was recently deployed at the grand opening of the Huntsville H.E.B store and at Fair on the Square. In September 2017, the event trailer made an appearance at Wolf Creek Park in Coldspring, where it was available to perhaps its most high-profile occupant: Laura Bush, former first lady, was an honored guest at the event.

Not satisfied with providing lackluster service, A-1 Smith’s Septic is meticulous about cleaning portable toilets. When training new employees, Nancy compares cleaning portables to washing cars. “I tell them, ‘When you let your kids wash the car, it looks great while it’s still wet, but when it dries, you see all the spots they missed,’” she says. A-1 Smith’s Septic does not do what she disparagingly calls “pump and dump;” instead, employees thoroughly clean each portable toilet. “We actually hand-clean our toilets,” she says. “It’s one of the things that sets us apart.” The company also cleans commercial grease traps for many local restaurants. 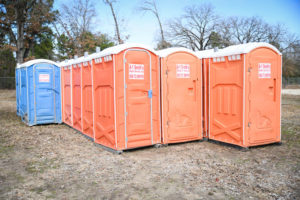 A-1 Smith’s Septic barely resembles the one-truck operation that got off to a humble start in 1989. As its motto states, it is “Cleaning Texas, one tank at a time.” The company is pleased to be able to give back to the community that gave the business its start. It donates regularly to Habitat for Humanity, contributes children’s bicycles to The Huntsville Item’s coloring contest and, each October, donates ten percent of septic sales to the Senior Center of Walker County. Each spring and fall, A-1 Smith Septic’s is a sponsor of Trash Bash, and employees, families and neighbors pitch in to clean up roadsides and plant flowers.