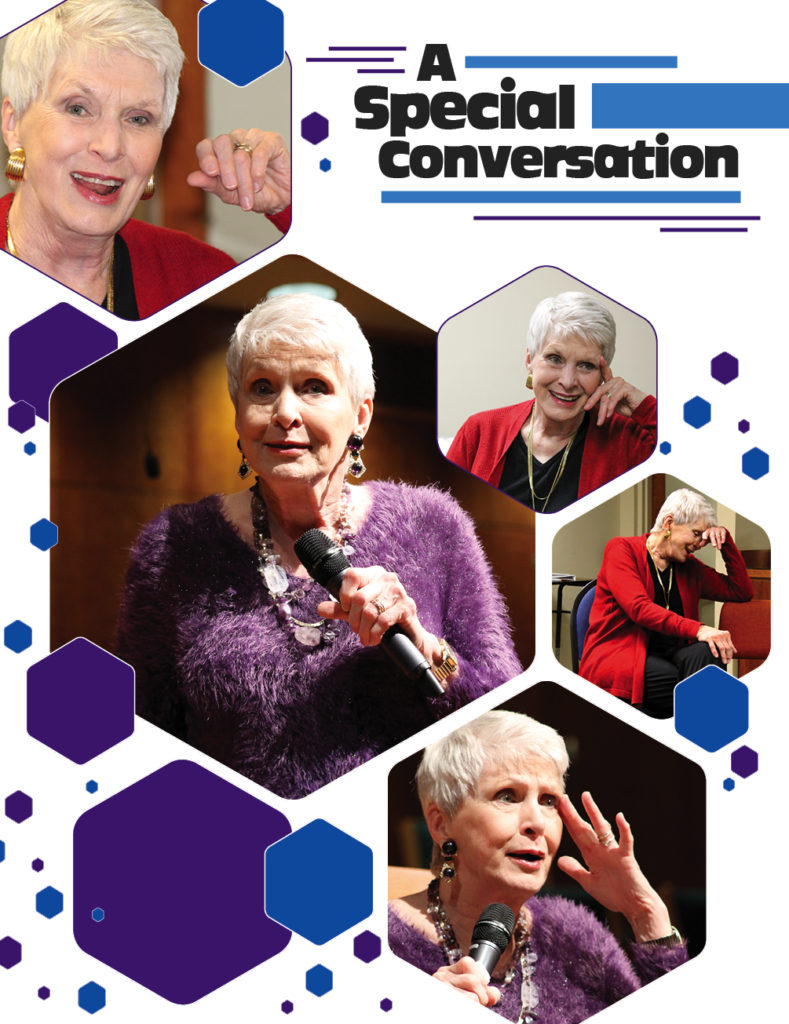 She’s 6’2”, and she’s a hoot. If you’ve never heard humorist Jeanne Robertson, you’re missing out. Now in her seventies, the former Miss North Carolina, Miss America contestant, teacher, athlete, wife, mother, and grandmother spends her time traveling all over the United States speaking to audiences that include many new fans, thanks to her videos on YouTube. Jeanne was in west Texas recently for a benefit for the West Texas Rehabilitation Center, and Postcards Magazine had the privilege of spending some time with this amazing woman.

After watching your performances both online and in person for several years, it’s easy to feel like we know you. You are so personable and down to earth…

JR: (interrupting with laughter) Oh, I’m a ham! You gotta call it the right word!

Do you think you’ve always been a ham?

Well, I’ve been a ham, but I’ve never really tried to be one. I wasn’t the funny one in high school. There were a lot of girls funnier than me.

I know you’re an athlete. How did you get involved in the pageant world?

Nobody pushed me. Sometimes people will think my mom pushed me to do it, but she didn’t. The Jaycees were sponsoring the Miss North Carolina pageant, and my local Jaycees asked me my senior year if I would be in it. All the proceeds went back to the community, and I told my mother and daddy I thought I’d like to do it. Then they asked me, “…and what are you going to do for your talent?” Well, I had no talent. My freshman year at Auburn University, they called me again, and I called mother and daddy, but they said, “You still don’t have anything you can do.” I told them by the next year I’d have something, so I went back the next year – there were six of us, and we all knew each other from high school, but I was the oldest one. I won Miss Graham. Pageants were very big in the 60s. I went to the Miss North Carolina pageant with about 80 contestants. It was back when TV was so new, and it was on TV live, and everybody watched because they knew somebody. I won Miss North Carolina, and then it was on to the Miss America pageant. I did not win that, but I won Miss Congeniality. 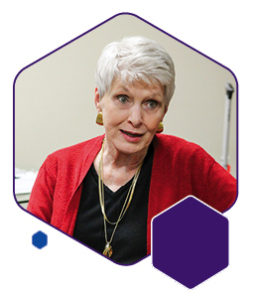 How did winning Miss North Carolina change your life?

The winner had to either drop out of school for a year or take a sabbatical from her job to travel the state of North Carolina for a year speaking two or three times a day. It took me about a week to figure out if I said something funny, and people laughed, that I loved it! I won on a Saturday night, and I was in Fayetteville on Tuesday for my first appearance. I told my Daddy I had to get up at this luncheon and make a speech. He said, “Well, you know you oughta say something funny.” I said, “Like what?” He said, “From here to the beach, you have to go through Fayetteville, and it’s a speed trap. And everybody gets a speeding ticket. You ought to mention that. We’ve gotten three or four ourselves.” So I got up and talked about that, and they fell out. I said, ‘This is kinda fun!’ So, each town I’d go to, I’d try to say something a little funny, and then I began to develop a routine. The next year, after making more than 500 little speeches, not shows like I do now, I crowned the next Miss North Carolina, and the following week, I spoke at three conventions and the Rotary Club Ladies Night. I charged $50 to speak. One time, I charged $50 to go from North Carolina to Biloxi, Mississippi to speak, and that included my expenses! I had to learn a lot, but I just loved it and kept doing it. Never looked back. I went back to school and finished. 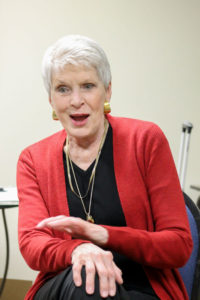 Did you ever figure out what your talent was?

No, I still didn’t have any. It was just pitiful. I played the ukulele and sang an original song. I thought the original might help me, but it didn’t help me much. I was on 60 Minutes one time, and I said a line that I didn’t know if Morley Safer heard or not, but he did, and he said it. “She began her speaking career when she was Miss North Carolina in 1963, and no one has milked it for more!”

You’ve been speaking for years, but you’ve said the internet changed everything for you.

This is my 54th year to be a professional speaker, and when you are a professional speaker, you go to a convention or meeting, and you don’t have to sell tickets at all. We’ve always said to young speakers, ‘Don’t think people are coming to Las Vegas because your name is on the program; they’re coming because that’s their yearly convention.’ But in the same vein, you don’t have to sell tickets. A few years ago, in my 60s, I embraced the internet. I’m on Sirius XM, iTunes, Facebook and I’m now approaching 41 million views on YouTube. You can’t do it all. I don’t Tweet. Some people came to me and said, “We think you can sell tickets.” I had only marketed to meeting planners, but because of the internet visibility, they thought we could do it. 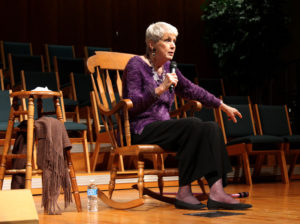 Your “Don’t send a man to the grocery store” video was the first thing I ever saw of yours. I was rolling!

When I taped that story, it was right under 8 minutes. When I tell it live, it’s about 14. There’s a saying among speakers that, “You get better, but any tape you do stays the same.”

What’s the most embarrassing thing that’s ever happened to you on stage? 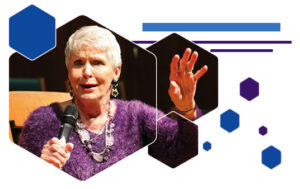 (Laughing) I’ve had so many things in 54 years! I used to emcee pageants during my early years, and they were run by local volunteers, not professional theatre people; at one, I remember I had given them the cue to shut the curtain. Nothing happened, so I told them again. Still nothing. I went and pulled the curtain. Pulled it straight down—everything fell off into a heap on the floor. I’m out there kicking it out of the way, and two or three people are trying to pull it off the stage! But see, if you are a humorist, and that’s what I am, you go to the meeting prepared, and then you HOPE the banner falls off the wall! You hope for things to go wrong. A comedian’s main goal is to get the majority of people to laugh no matter what. You might make a certain group feel very uncomfortable, but that’s the reason a comedian is there. The humorist is there to make the meeting planner, or person that brought them in, look good. Even since I’ve switched to doing theatre shows, I still want there to be a tiny point people take home while making them laugh. 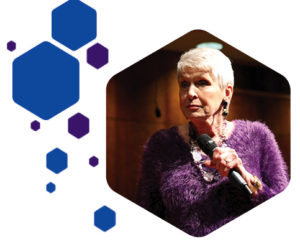 What legacy do you hope to leave for your family and grandchildren and fans?

I truly try to find the humor every day, and I think that we DO find what we’re looking for. If I can have my grandchildren, and anybody that’s heard me speak, approach life by saying, “Well, you know if this (funny) stuff is happening around her, it’s happening around us, too.” It’s a whole different approach to living. 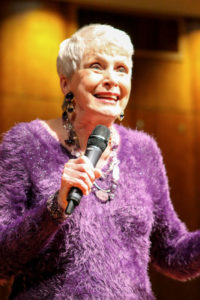 I started looking for humor for speech material. Period. But then in the airport one day, I looked…and the flights were grounded, and the people in my gate area—their body language just told you how upset they were. I pulled out my pencil, sitting there ready, just to see if anyone would say something funny I could use. That was when I realized, ‘Everybody in here is angry but me.’ I was so busy looking for the humor in it that I didn’t get upset, because there wasn’t anything we could do about it.

If you’re telling stories everybody can identify with—we’re all gonna get arm flab, it’s coming—everyone can laugh about that, no matter who you are or what religion or race or background you have. You realize we really have a lot in common, and people have been dwelling on all the stuff we don’t have in common. But everybody wants their children to be happy. Everybody wants the best for each other, and most people really don’t want to hurt anybody. It’s like going to a ballgame. Color is very important to me. Not skin color. I want to look around me and see if they’ve got on Auburn. I don’t care who they are, what they are, what they believe in, or anything else. We’re gonna be high-fiving, because we have found something in common. You can teach your children how to approach life either way—by getting upset about everything or by saying “Isn’t this funny?”