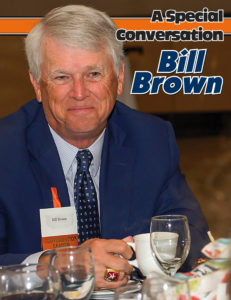 Bill Brown is best known for his baseball sports casting, first for the Cincinnati Reds and, later for the Houston Astros. Brown was known for his professionalism during his career, a reputation that stemmed from his deep knowledge of the game, skill at play-by-play announcing, and rich, pleasant voice. His reputation was reinforced and enhanced off the field, a product of his community service, generous spirit, and lack of ego. These qualities were on full display when he came to Sam Houston State University, where he spent an enjoyable afternoon reminiscing about a life in baseball.

You were born in Missouri. Did you grow up there, too?

Yes. I didn’t travel much in my childhood, and I stayed in-state to go to college. I graduated from the University of Missouri, where I majored in journalism. I knew from the time I was 14 that I wanted to broadcast sports.

If you were growing up in the 1950s, I would guess you listened to Harry Carey and Jack Buck.

Yes. They had different styles. Harry Carey was the fan favorite, and he was more bombastic. I liked Jack Buck more. He was low key; he wasn’t the show. He tried to tell the story accurately. He got excited when the game was exciting, but not like Harry. 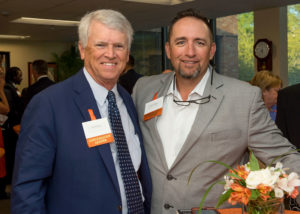 Did you call games in college?

I did. Also, when I was in high school, I had a journalism class, and those who wanted were allowed to do a five-minute news segment. I turned it into a sports cast. We could have just hired a new principal, and I wouldn’t even mention it; I would have talked about how the football team did. But I hung around the broadcast booth, and the guy who did the play-by-play would let me do stats in the press box. Eventually, he hired me, and I did play-by-play for high-school sports. I ended up doing games in other cities, too. It was great training.

After college, you spent some time in Texas.

Mizzou had such a great reputation, some pretty big media companies would interview there for internships. I interviewed at a company that owned several stations, including one in San Antonio. They put me in a chair and set up a scenario of me interviewing a man who “just came across the Atlantic Ocean during WWII in a tugboat, and there were torpedoes being launched at him.” They said I was standing on the dock in Newport, Virginia, and it was my job to interview him. Then they asked me to type up the information from my “interview” and turn it into a news story. And, finally, they asked me to read the story as if I was on the air. I got the internship in San Antonio, and the next year they hired me. But this was 1969, and the draft was going on, and I got drafted not long after that. I spent two years in the Army, then I went to Ohio.

So in your early Ohio days, you’re doing sports such as hockey and tennis?

Yes, even some bowling. I did do some basketball and football, but I was doing a lot of different sports. 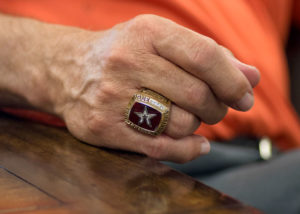 Did you always want to do baseball?

Yes, that was number one, but I wasn’t so naïve to think that I could target just that. I was willing to take anything. If I had been given the chance to do NFL or NCAA Football for a career, I would have. But, baseball would have been my choice if that’s how things worked.

Baseball does come along in 1976, and you have the chance to do the Reds, when they were the “Big Red Machine.” That’s a team that had George Foster, Joe Morgan, Pete Rose, Tony Perez, and Johnny Bench. What was it like broadcasting for a team that has four or five Hall of Famers?

Yes. They had won the World Series in 1975, and they won it the first year I got there, in 1976. We all knew it was something special. There has never been another team like it, at least not for me. I would choose the Reds as the top team in my lifetime.

Who was your favorite player on that team?

I think a lot of people would say Pete Rose, because he was a grinder. But I thought Bench was the most talented player on the team, and one of the five best catchers of all time. He hit with power, and he threw out almost 50 percent of the baserunners who attempted to steal.

Ten years later, you are with the Astros. How do you go from Cincinnati to Houston?

What do you mean you weren’t “good”?

I was boring. They didn’t tell me that, in so many words. But the radio guys were Marty Brennaman, a Ford Frick Award winner, and Joe Nuxhall, who was beloved. They were on radio, and they were on every night. I was on television, and only about a third of the games were on television. So, the radio guys were going to be more popular, but they were also better. I admit that.

One of the qualities that translates across career disciplines is a growth mindset, one in which people have a mindset that allows them to adapt, make changes, and bounce back after a setback.

It took me about five years to get another chance in baseball. I worked for different news companies as a sports director. 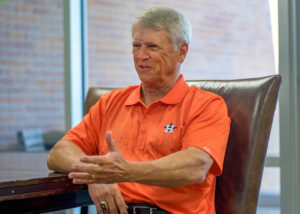 You came to the Astros in 1987, when they had Mike Scott, Nolan Ryan, Jose Cruz, and Glenn Davis?

Yes. Even when I was with the Reds, it was just electric when Nolan Ryan pitched against us. But I didn’t really know him, hadn’t really met him. He could be intimidating; in Houston I learned that he was a really nice guy. He’s also very funny, and he can tell a story in a way that’s humorous and memorable.

Speaking of memorable, what’s your favorite moment in baseball?

Probably Craig Biggio’s 3,000th hit. I’m for spontaneity, so I don’t really believe in scripting calls. But a few weeks before Biggio gets his 3,000th hit, I’m having lunch with the Rockies’ radio announcer, and he encouraged me to rethink my reliance on spontaneity for this call, noting that this would be one of the most important moments in the franchise’s history. So I did think about it, but nothing came to me! Finally, one night I was driving and a little blurb came to me, and I went in wrote it down. The night he got his 3,000th, he actually got five hits that game. You can’t script that! But when he got his 3,000th hit, I paused so the audience could take all of this in: seeing his teammates mob him, hearing the crowd cheer for 15-20 seconds, and I said something like, “You know, 20 years ago a young boy from a little town in New York came to the Houston Astros with Texas-sized dreams, and now he’ll be headed to another little town in New York.” I don’t know how good it was, but it made me feel better that I took my friend’s advice and prepared something.

(Editor’s Note: For non-baseball fans, Brown’s mention of “another little town in New York” is a reference to Cooperstown, New York, home of the Baseball Hall of Fame. Craig Biggio was inducted into the Hall of Fame in 2015.)

Baseball has 162 game seasons. What is the day-to-day preparation like?

If it was a new series on Monday, I would wake up around 7:00 or 7:30 am and read two or three newspapers. I kept a notebook and recorded the players and their performances game by game. And I kept notebooks on other teams, too. I would examine the box scores and make new entries into my notebooks. Let’s say the Astros are playing the Angels; I would go over my notebooks, and I would look at the starting pitchers for the game and get all my material on them ready. I would also keep notecards on every player in the league, and I would add notes and clippings and such as the season progressed. Baseball is about being a packrat, accumulating notes, memories, and stories to hold in reserve until the proper time to use them. Of course, you may go through a whole three-game series and not use things, but it’s good to be prepared.

You did televised games. How do you prepare for that differently than if you were on radio?

Radio is more of a blank canvas, and the announcer fills it. In television, you react to what the cameramen do a lot of the time. If they put up a shot of the other manager, you are compelled to say something about him. It’s not that way in radio—you can talk about the other manager anytime you want. In television, you can also let the game breathe a bit more. You don’t have to speak to every piece of video, because some things are self-explanatory, and you don’t want to insult people by telling them what they can see for themselves. On television, the broadcaster is supplemental; on radio, the broadcaster is essential.

Tell us about the distinction between play-by-play and color.

The play-by-play guy needs to have a pleasant voice that doesn’t irritate people. He takes care of the mechanics: the starting lineup, defensive positioning, the umpires, the facts about the stadium, the history of the team as it relates to the game at hand. He needs to be a master of description. The color analyst is charged with explaining why things are happening, providing insight about players. He should to be a strategist, someone who can anticipate and look ahead. 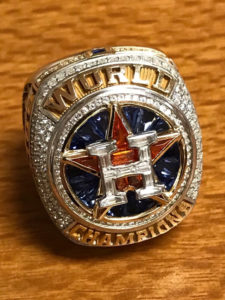 You retired in 2016, but you were a guest announcer last season, calling about ten games. How special was it to be able to come back and be a part of their World Series championship?

It was special, and I was enjoying it as a fan, too. People would ask me if I missed being there every day, and in a way you do, but it was my decision to retire, and I really enjoyed the ride and the season. The pressure was lifted, and it was a matter of just showing up and enjoying the game. I didn’t have to come up with a new superlative for Jose Altuve every game!

Tags:
Previous Article
Do You Know? Kevin Edney
Next Article
Just for Fun: ‘Cue It Up!