A Day in the Life: Vineyard Harvest 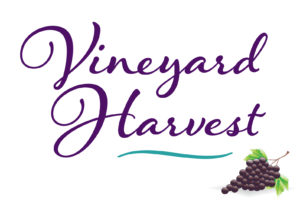 Carriage House Farm and Vineyard invited Postcards to their 2018 harvest day on a balmy morning in August to witness the harvesting of nearly 500 grape vines. Carriage House is home to two different types of grapes that thrive in our Texas climate.The Blanc du Bois grape produces a white wine, and the Lenior (Black Spanish) produces a red. The farm is owned and operated by John and Judi Benestante, a former prison and public school administrator and former prison official who now personally manage and work their East Texas boutique vineyard in Coldspring. 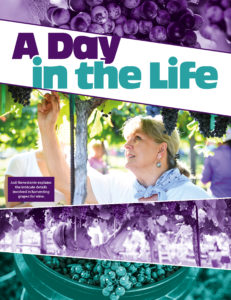 I greet both John and Judi upon arrival. It is 7:30 am; John is driving a tractor that will be used to take freshly picked grapes to a refrigerated truck, where they will be delivered immediately to a winery close by. Judi is walking the vineyard (clipboard in hand, bandana tied around her neck) welcoming the volunteers, family, and friends who came to help harvest their beautiful and hard-earned crop. Tables are set up with donuts, kolaches, juice, and coffee for all who came to help. Lunch will be provided later, in addition to some entertainment and grape stomping. A large speaker plays country music in the background as people begin to make their way through the first couple rows of winding green leaves, clippers in hand, cutting from the vine and dropping great bunches of grapes into the buckets below. I pick Judi’s brain for a few minutes before she begins making rounds to visit and manage the production this morning (we’ll do this again later, stay tuned).

Judi worked for many years in education and earned her PhD before later deciding to attend a viticulture program co-offered by Texas A&M/Texas Tech for two years, in hopes of learning everything she needed to know to grow grapes. She didn’t just want to do it, she wanted to do it well and learn as much as she could about the versatile crop. 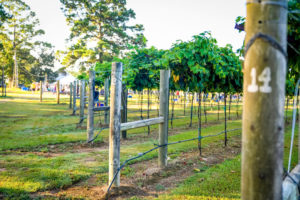 “You know they’re ready when the mockingbirds show up,” Judi says. Right then, a woman asks Judi where she should snip on the plant. Judi shows her the best spot, telling her that you cut as close to the cluster as you can. As soon as a bucket becomes full of grapes, some teenage boys do the heavy lifting and take the full buckets to the tractor. On the tractor’s forklift sits a large “lug” (think ginormous Yeti cooler). The buckets of grapes are emptied into the lugs and taken to a truck, and dry ice is poured into the lugs with the grapes to keep them cool. From here, the grapes are taken directly to the winery for the winery to start production immediately. Judi explains the main process once the grapes are in the hands of the vintners, before introducing me to one of them. After arriving at the winery, the red grapes will be immediately crushed and de-stemmed before being put into vats to start the fermentation process. The Blanc du Bois (white) and Lenoir (red) grapes are harvested at different times due to their ripening dates and are processed differently as they will produce different wines. 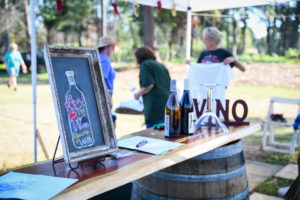 Carriage House Vineyard has partnered with H-Wines, a local winery also located in Coldspring, to produce both a red and white wine using their locally-grown grapes. Two highly experienced vintners and Frenchmen, Steve Hari and Philippe Legrand, are the head winemakers at H-Wines. This morning, Postcards had the pleasure of talking to Philippe, as he was present for today’s harvest and mingling with the volunteers who came to help. Philippe gives some backstory on the partnership between H-Wines and Carriage House Vineyard, explaining (in an enthralling and thick French accent) how he and fellow vintner Steve came from France to be making wine in Coldspring, Texas. 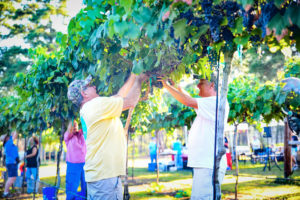 Philippe and Steve have known Judi and John for 7 or 8 months and decided to combine forces and work together. Since then, the vintners have consulted in the pruning, maintenance, and fertilization processes at the vineyard. Steve and Philippe’s dream is to eventually add a wine tasting sector to their business. As professional winemakers, the men share their knowledge with growers in the area, using their 23 years of experience. Before the two men opened H-Wines in Coldspring, Steve had an estate in Burgundy, France of about 12,000 vines; he lost his supervisor 2 years ago, one month before the harvest. This was a serious blow to his production, as the supervisor is over the organization of harvesting, maintaining equipment, pruning, and fertilizing the grapes. Steve could not find a trustworthy supervisor after he successfully made it through his harvest, so he and his family decided to sell the estate. They came to Texas when Steve’s wife was offered work here as a geologist, and so began his endeavors with Texas grapes. He was discouraged, as he had just left behind his livelihood of 20+ years. Soon after moving to Texas, Steve would meet Philippe (also from France) at a Christmas party in Houston. After becoming friends about 4 years ago, they decided over a bottle of wine to start a winery together. 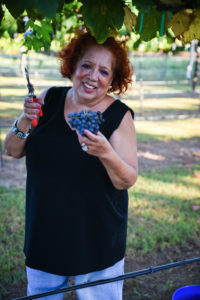 The process of growing grapes for wine making is a delicate one that involves special and frequent attention; it is more of an art than anything else. Philippe says it’s really about what God gives you: the rain and the weather. These heavily affect the flavor outcome of the grapes. One year the flavor may be astounding, and the next it may be kind of “blah.” The seemingly small actions taken during production make the biggest difference at the end when it is time to harvest. For example, it is important not to trim away stray or unsightly branches within a close time frame of harvesting, as the plant would put its energy into healing the wound, as opposed to using its resources to produce sweet berries. About a week before harvest, irrigation is stopped. Halting the water supply to the vines causes the plant to send sugar up to the grapes, loading them up with flavor. Watering too close to harvest time or getting a heavy rain can destroy a crop or change the flavor of the whole crop come harvest day.

We have the chance to talk with Judi again about the many factors that affect the outcome of the crop. When dealing with grapes, one is concerned with slope, water, sun, and wind direction. “Successful vineyards are placed on an approximate 15 degree slope (to help shed water), where they get 8-12 hours of full sun. They can require, in a drought, up to 2 gallons of water a day, per vine. So, we have a real deep well here, about 570 feet deep. We use a drip irrigation system and zones that we can turn on one at a time. Most of the time you turn off the water the last 4-5 days before harvest, ‘cause that vine is gonna say, ‘Oh my gosh, I’m starving,’ and it’s gonna put sugar in the berries tryin’ to survive, which sweetens up that berry,” she says with a Texas twang. “Growing grapes in the Gulf Coast with the humidity, the grapes will often grow a fungus in the vine. If you have one rotten berry, you’ve lost the whole cluster.” Disease is prevented and treated by frequently checking on all the vines, paying close attention to detail. 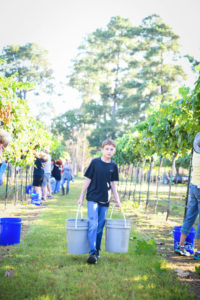 Judi explains the parts of the vine, starting with the top where two vines branch out from the main vine, also called the trunk; these are the bilateral arms. Above these arms is the “fruiting zone” where the grapes hang. Grapevines are prolific growers, and the shoots can grow up to a foot a day. “When I started calling people who were experts, they told me I could grow these two types of grapes well here in the Gulf coast. So far, you can’t grow varietals well here, so you have to find what grows well in your area. In February, there won’t be anything left but long, brown shoots. All of the leaves will have fallen off. We will prune everything off the trunk except these spurs. See this spur here, how it comes off of the main trunk? Normally you only want two shoots off a spur, with two buds on each shoot,” she says, pointing to a place at the top of the trunk between the two arms. “There will be nothing out here, and that’s called a heavy pruning. So, in February when we have a pruning party, it’ll just be these brown shoots; we’ll cut them down to two buds. People will come and clip, clip each vine. Then we will go behind them to clean them up, and that is the art of pruning. If you don’t prune well, you won’t get any grapes.” 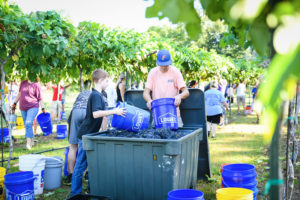 The road to a successful harvest is full of trial and error. Carriage House put in their first grapes on 3/4 acre in February 2010, 1.5 rows of Blanc du Bois and 1.5 rows of the Lenoir, with the rows 12 feet wide and 6 feet between vines. For Phase II of extending their vineyard, in February of 2011 John and Judi planted 1/4 acre more by adding 2.5 rows of Lenoir and 1.5 rows of Blanc du Bois. Each year, vines have been added, and today there are over two acres with over 500 vines. “Our little ‘boutique vineyard’ produced over 8,100 pounds of grapes for the 2018 season,” says Judi proudly. 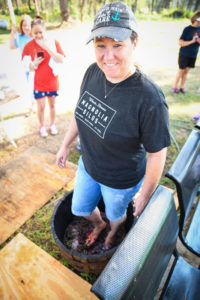 “When you come to my pruning party and cut the shoots off, there’s about 10,000 of them just laying on the ground. You can take it home, and John and I will teach you how to plant your own vineyard,” she says, reaching over to pick a grape from a cluster. “Can you eat these grapes? Sure, but don’t eat the seeds. Just squeeze it in your mouth and bite around the seeds.” We do, and the inside flesh is even sweeter than we’d expected. “When the seeds are dark chestnut brown, the grapes are ready, which they are.” She pinches the peeling of the Black Spanish grape and dark red bursts out. “See the juice, how pretty it is?” 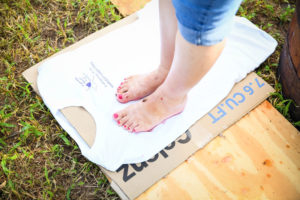 Early afternoon approaches as harvesting wraps up, and the crowd slowly gathers near the tables for lunch and entertainment. Harvesters move through the line for fried fish, lemonade, and sides, while some ladies start stomping grapes and transferring their red, juiced-stained feet to a white t-shirt. Judi gives a thank you to everyone who came to help, says a prayer over the food, and Old-time Country Music Hall of Fame member Margie LeBlanc sings some classic songs for the crowd.

During Judi’s prayer, she said something beautiful, giving credit for the harvest to someone else. Aside from the hard work that she, John, and the vintners had put into this harvest, she said, “It is by Your hand that this is made, we’re only Your workers.”