A Day in the Life: Humbled Heroes 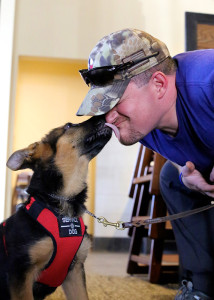 The old saying goes something like this: “Every dog has his day. If it’s a good dog, then he’ll have two.” Wouldn’t it be wonderful if the old saying could be amended to include, “If the “dawg” is a humble hero, then those are some pretty dawggone good days.”

For Joe “Bubba” Millhouse and his wife Michelle (“Mo”for short), the day begins long before 9:00 am and, in many ways, almost never ends. They are the founders of Humbled Heroes, a 501(c)3 non-profit organization that provides service dogs to those deserving them because of a condition known as PTSD. Post traumatic stress disorder is a condition that may develop in people who have seen or lived through a shocking, scary, or traumatic (and in many cases even dangerous) event.

It is natural to feel afraid during and after a traumatic situation. Fear triggers many split-second changes in the body to help defend against danger or to avoid it altogether. This “fight-or-flight” response is a healthy reaction meant to protect a person from harm. Nearly everyone will experience a range of reactions after trauma, but a number still continue to experience these symptoms on an ongoing basis, and after careful medical evaluations, they become diagnosed with the PTSD condition. People who have PTSD may feel the stress of dangerous situations though danger may not be apparent. 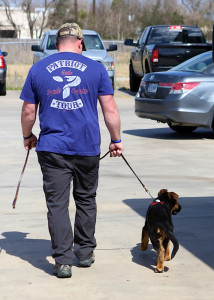 Far too many of the abused, those surviving natural disasters, rape victims, former service members, police, first responders, and firefighters are dealing with this nightmare on a daily basis. It is for those that the team at Humbled Heroes set out each day to make a difference.

8:30 am – On this day, Bubba has been at it for hours already. He rises before dawn, kisses his wife, and begins his “dawg day.” Bubba is a dog lover, and so is Michelle. He’s up early making sure his dogs are walked, watered, and have performed their daily morning constitutions.

9:00 am – The Humbled Heroes team, headed by Bubba, gathers at Panera Bread to discuss marketing strategies and fundraising events. With Bubba are Terry Sowers, Helen Harris, and Teresa Perkins. “We are definitely a team,” Bubba said. “This group does so much more than I could ever ask of them. They are just my people.” 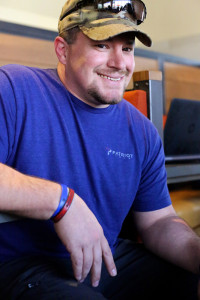 Sowers became involved when she learned that Humbled Heroes provides service dogs at no cost for our former solders, firefighters, first responders, and police. “Once I leaned about what Bubba and Humbled Heroes were doing, I knew I wanted to become a part of it,” Sowers said. “I knew I could provide the service dog uniforms. I just felt like we, as Americans, should all do our part for those who have put their lives on the line for our freedoms.” Perkins, along with her service dog “Koko,” has been a family friend for most of Bubba’s life. “I remember I used to change his (Bubba’s) diapers.” Perkins said. “He has always been a dog lover, and I knew that this work, or this calling he has on his life to help people by providing them with service dogs, was the next logical step for him.”Also present is Helen Harris with her service dog “Porter,” who was trained by Bubba and provided to Harris free of charge.

10:00 am – As the group members discuss upcoming plans, it becomes glaringly obvious that every conversation and every movement is concentrated. “We try to never lose an opportunity to raise awareness about PTSD and the service dogs that help them to come back to society,” Bubba said. 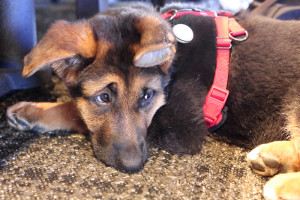 As the group sits in the Panara restaurant, one could feel the eyes of other customers looking at this group of people with their dogs sitting quietly at the foot of their handlers.

Even though the animals are clearly marked with all the necessary markings and service animal identifications, it is hard to miss a number of customers who, upon seeing the service animals, turn and walk out of the restaurant. 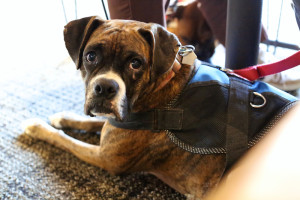 11:00 am – The manager of Panera Bread comes out to check on the situation with the Humbled Heroes. She is polite and appears to be well-versed in the plight of service animals and this organization. “We try our best to accommodate all those with any disability or any special needs,” she said. “The Humbled Heroes have been coming around this restaurant for quite some time now, and we welcome them every time.” As a matter of fact, the restaurant has become a de facto headquarters of sorts.

11:30 am – New customers come into the store and take random seats. One by one, this set of new customers are drawn to the Humbled Heroes team along with their dogs. At certain points, the thoughts seem to be communicated between the service dog and its handlers in a type of telepathy. At this point, a question sparks from one of the customers. 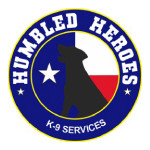 “Can you tell me about your group?” asked an inquisitive bystander. The stories of each member begin to unfold, each with their own strenuous, laborious, and arduous emotional journey.

Bubba’s story is especially moving, evoking a keen sense of poignancy. For Bubba, at least, his PTSD was brought about by the gradual accumulation of years of deeply distressing and disturbing experiences. Add to that in December 2010, the left-handed firefighter and Technical Rescue Operator’s left hand was crushed by the Jaws of Life device while saving a life extracting an accident victim.

Even after multiple surgeries involving his elbow, hand, and wrist and physical therapy (which included the amputation of the ring and little finger), he made the decision to retire from the Houston Fire Department in 2015.

It is through these authentic impromptu dialogues the Humble Heroes message grows, with the dogs loving every minute of helping the transition back to social interactions. 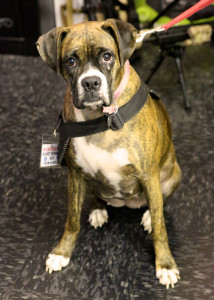 Noon – The Humbled Heroes group takes a break for lunch at a near by Chick-fil-a.

Upon entering, the manager is seen whispering, “They are only service dogs; everyone take it easy, it’ll be okay. It’s okay for them to be here.”

She then makes a bold move that showed deep compassion, but may not normally be part of her job description. “Would you like me to bring some water for your dogs?” she asked. “If there is anything I can do, or if you need anything, just let me know. I’m here to help in any way I can.” She even throws in some lemonade on the house.

Again, some customers simply look at the dogs and leave. A few others, however, murmur their unfavorable opinions.

For whatever reason, those below a certain age seem to be the most virulently opposed to the use of service dogs. One individual became upset to a particularly unusual degree, almost tripping over one of the service dogs while failing to look up fast enough from his new iPhone—clearly the fault of the animal, according to that so-called “highly observant” native townsperson.

But it’s noon, and Chick-fil-a is packed. Here the service dogs earn their snacks. Those who suffer from PTSD often avoid crowds. But, in this instance, the dogs act as a buffer to help their handlers cope with emotional triggers. In the same almost telepathic method, the emotions of peace and calm passed through the animal help the handler feel safe and more at ease. 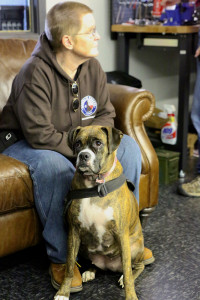 As the lunch rush begins to gradually dwindle and decline, another manager comes out to check on the Humbled Heroes team.

She is young and is well within the age group seeming the least tolerant of the service animals. Yet, she’s curious and eager to learn about service dogs. What she receives from the group members is a change in perception and a better appreciation of the qualities service dogs provides. When she leaves, she walks away with the spirit of the newly converted.

“We were happy to do whatever we can for Bubba and his Humbled Heroes,” said Kennedy. “I admit, I knew very little about PTSD before we met Bubba. But, what was great was that I had a chance to meet Bubba the person first. I had a chance to see him for himself first and not have my opinion of him influenced by any condition. When I learned of him speaking to high school kids about PTSD, I knew we had to help in some way.”

The tactical shop acts as a magnet, drawing many veterans or friends of veterans that know of those suffering through a PTSD diagnosis. The Humbled Heroes make full use of every contact. They take the time to explain their story, as well as their formal training with obedience, behavior, and the training of service dogs. 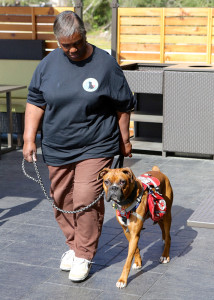 2:30 pm – Bubba has to cut things short today because he has to pick up his son, 7 year-old Landen, from school. But, before he leaves, another opportunity to push past another obstacle becomes apparent.

“One of the hardest things for those recovering from PTSD is avoidance. People don’t like talking about it, because we feel no one understands,” Bubba said. “When I talk about it, it helps me, and it also helps in our mission to raise the levels of awareness, knowledge, and perception.”

What is difficult today is talking about the loss of four of Bubba’s fellow firefighters—Matthew Renauld, Robert Bebee, Anne Sullivan, and Robert Garner, all lost in the line of duty in one day. Bubba, still recovering from surgery on his left arm, manned the radio and was one of the last to hear his teammates cries as they all fell victim to the flames.

4 pm – The day is coming to a close with the removal of the service dog work vest. Once the vest comes off, the dogs are free to be pets again, and they have loved every bit of the day. They have had the chance to go places other dogs can only dream of. Thanks to these service dogs, those that continue to suffer from PTSD can finally escape that nightmare and go to those places, too.