A Day in the Life: County Clerk’s Office 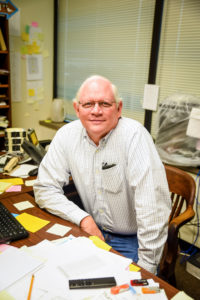 About 20 years ago, a group of schoolchildren came to the Montgomery County Clerk’s Office on a field trip. To explain the office’s function to them, Montgomery County Clerk Mark Turnbull used an analogy, “Do you have a shoebox in your room for special toys, baseball cards, and things you are trying to keep and protect?” he asked. The County Clerk’s Office, he told them, is like that shoebox. Its job is to provide safekeeping for valuable papers that their parents and other adults might need.

It takes many people to make this high-tech shoe box work. Important papers—from birth and death certificates to property records—are recorded with several layers of redundancy to prevent loss of data. While records are kept digitally, many are also maintained on microfilm, and some things are still printed on good, old-fashioned paper. The Postcards team recently requested a meeting with Turnbull and members of his staff to learn more about this sometimes-overlooked government service.

8:15 a.m. – We arrive at 210 West Davis on the morning after the Astros won the World Series. Many employees were up late watching the game and celebrating the victory the night before, but this morning, there is a steady hum of activity. Dozens of people are busy carrying out the tasks that make this office work.

8:30 a.m. – We meet Mark Turnbull, who has been the county clerk since 1995. He tells us that in less populous counties in Texas, county clerks have more hands-on responsibilities, but in Montgomery County, the job is more managerial in scope. “I make sure we have the people and resources so the people at the counter and in the trenches have what they need to do what they need to get done,” he says. “All of the people here are deputized, because one person cannot physically do everything.” Unlike many government offices, Mark’s name is not on the door. That is Mark’s choice, explains Chief Deputy Darin Bailey, because he knows it takes a great team to make the office work. “Someone was doing this a long time before I got here,” Mark says, “and someone will be doing it a long time after I’m gone.”

8:45 a.m. – We continue getting to know Mark and his staff. We learn that Mark played tight end on the Conroe High School football team before graduating in 1975. He still remembers a civics teacher named Mr. Zuber, who encouraged students who were interested in government to attend precinct conventions following primary elections. After graduating from the University of Houston, Mark decided to take his former teacher’s advice and, in 1980, attended a precinct convention. “It kind of hooked me,” he says. He was active in local politics as a volunteer for several years before deciding to run for office. Remembering Zuber’s lectures about corrupt politics, he wondered, “Can a reasonable, normal person with reasonable, normal intentions get elected, or is it really all machines and corruption?” He ran in 1990 and was defeated by 241 votes (with almost 45,000 cast). Four years later, he was elected and has been in office ever since. 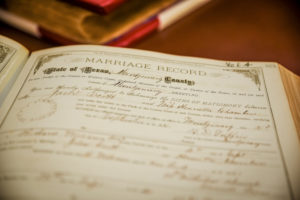 9:15 a.m. – We begin a tour of the building. Our first stop is the Vital Records Department. Here, customers can get official copies of birth certificates, death certificates, and can obtain marriage licenses. “We are normally busy all day long,” says Judy Bohuslav, registrar administrator, “and we stay open during the lunch hour.” The office is particularly busy, she says, right before school starts in the fall. 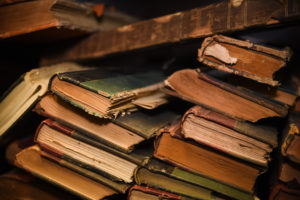 Beware of fire (and other natural disasters)

9:30 a.m. – Our next stop is at a fireproof vault about the size of a walk-in closet. There, the expensive paper used for making birth certificates is stored. Unfortunately, there are thousands of other documents spanning many decades that are stored elsewhere in the building, and they are not as well protected. Mark tells us that there are plans to build a new records archive building that will be able to withstand natural disasters. Meanwhile, digital and microfilm records are stored off-site in case of loss by fire, flood or other disaster. Digital records are sent to a company that specializes in microfilm processing and storage. Those records are transferred to microfilm and stored in a salt mine in Pennsylvania.

Mark and Darin recall a fire in downtown Conroe several years ago that burned a nearby building to the ground. Firefighters recognized the significance of the records that are stored at 210 West Davis and developed a proactive plan in case the fire spread to the adjacent building. Fortunately, the fire did not spread. 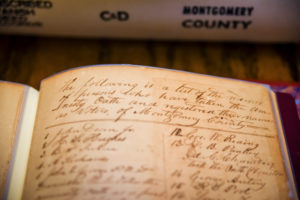 From liquor licenses to livestock brands

9:40 a.m. – The adjacent office, the Official Public Records Department, handles the recording of all sorts of real property documents, including deeds, releases of liens and other real estate documents. This department also issues assumed name certificates, which are needed in order to set up “doing business as (DBA)” bank accounts. Veterans who are leaving military service can file copies of their discharge papers (DD 214 forms) here. 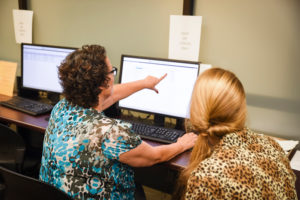 The Official Public Records Department also handles an amazing variety of paperwork, including the recording of powers of attorney, livestock brands, liquor licenses and estrays (animals). In addition, notices of public meetings are processed here and are posted both electronically and on paper in the County Courthouse. “We try to be on the cutting edge of technology,” Darin says, “but there are some things we still have to do the old-fashioned way.”

Sharon Wilson has served as the real property administrator since 2008, when every page of every document was stamped by hand—a noisy process, considering the thousands of pages that were processed daily. Today, barcode stickers are used. They reduce human error and make the office a quieter, more efficient place. “Technology has given us an awesome ability to streamline the whole process,” Sharon says. In 2010, she says, the department began recording documents electronically; today, approximately 65 to 70 percent of all documents are e-recorded. 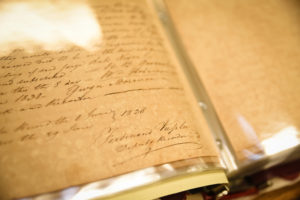 In recent years, there has been a push to get old paper records preserved in digital format. Recently, the data entry and imaging of deeds dating back to 1837 was completed—and, Mark says, “They are all available for free online to the public.”

10:00 a.m. – Sharon shows us the four computer terminals that are available for citizens to access public records, and helps us look up our own property records. While documents are indexed alphabetically by name, document type, and property description, she notes that the most efficient way to access property records is by the name of the property owner.

Several years ago, there were 10 busy terminals, but today, the area is almost deserted. These days, we learn, most people simply do their research on their home computers. To find public records, visit www.mctx.org and use the department search menu to find County Clerk. Or, access directly at gov.kofiletech.us/TX-Montgomery.

10:45 a.m. – The Postcards team gets a rare peek at the records storage area, where 5,820 books and 1,264 boxes of records dating back to the 1800s are kept. The passage of time, Mark says, can be noted in the way documents were recorded. In the days before computer technology, quill pens and calligraphic handwriting eventually gave way to manual typewriters. “My mother worked here before I was born,” Darin tells us. “I can open a book, see my mother’s handwriting, and know it was my mother who indexed it.”

A few years ago, an employee stumbled upon a book of records filed during the 1800s. Surprisingly, pages in the back of the book listed citizens who had taken an amnesty oath and had subsequently registered as voters of Montgomery County. Although the list is not dated, Mark surmises that it was compiled shortly after the Civil War. Other items of historical interest are often discovered.

Unfortunately, this area of the building sustained water damage during Hurricane Harvey. Mark and members of his staff responded quickly, however, and moved valuable records to dry areas.

11:30 a.m. – Mark shows us his office, a jungle of computer equipment. Walls are covered with graphs that track costs and spending. A bigger population, Mark says, doesn’t necessarily mean that government spending has to increase, and he uses his own office to demonstrate that government should not be wasteful with taxpayer money. For example, employees often need to compare several electronic documents side by side, so they need super-sized monitors. Instead of using $1200 monitors, however, the office uses TV screens, which cost between $200 and $300, and equip them with $100 video cards. Several years ago, Mark balked at the high price of computer software and resorted to writing his own computer programs to post records on the internet.

The County Clerk’s Office also serves as clerk for the County Courts at Law and collects court costs, fines, fees and other monies. Several years ago, because of Mark’s reputation for fiscal responsibility, he was asked to supervise the collections department. The office sets up payment plans for criminal defendants and monitors their compliance.

12:00 noon – The Postcards team leaves the busy office with a newfound appreciation for the crucial tasks that are handled so capably at this office. “What we do is important,” Darin says. “It affects people; it affects the world we live in.”