A Day in the Life: Beekeepers 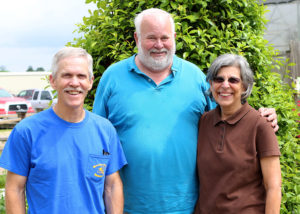 To spend a few hours around beekeepers is to discover they really like their bees. When we met with Kevin and Josephine Smith and Mark Short, officers of Walker County Beekeepers Association, we learned they are delighted when bees are thriving, collecting nectar, pollinating plants, and making honey. If, during the practice of their hobby, these beekeepers experience an occasional sting, well, that’s just to be expected. They do not hold it against the bees.

On average, beekeepers may spend only four hours per hive per month tending their hives, so a typical day in their lives may have nothing to do with bees. In fact, Mark says, too much attention disturbs the bees. Several times a year, however, bees are at the center of a beekeeper’s universe. 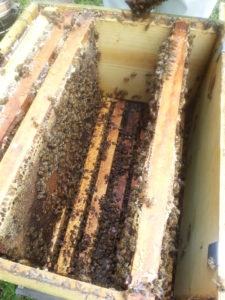 Winter is usually a slow time for beekeepers. Queens stop laying eggs, and there isn’t much beehive activity, Josephine says. Each January, she and Kevin inspect their hives, checking for ants, mice, and bugs that may have infiltrated. “They’ll go after anything as nutritious and delicious as honey,” Mark says. If their hives looks sparse, the Smiths will start thinking about rebuilding, and they may have to order more bees from a commercial beekeeper. Surprisingly, bees—packed in screened containers—are shipped through the U.S.P.S. (USPS is generally prompt in delivering bees, Mark says with a smile.). Conversely, if the Smiths note that a hive has become over-crowded, they may make plans to split it into two hives, with one queen per hive. Otherwise, the worker bees might prepare a new queen, and half the hive will follow the old queen in a swarm and look for a new place to live. 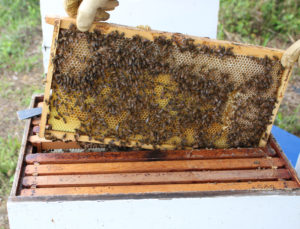 The Smiths became interested in beekeeping about two years ago when contemplating a new phase of life as empty-nesters. Josephine, a literacy teacher at the TDCJ Ellis Unit, persuaded Kevin to join her, and the couple purchased bees from a commercial beekeeper. They now keep two hives in the backyard of their Huntsville home. Like many beekeepers, they keep each hive in a set of stacked boxes. Although honey is really nothing more than stored bee food, “Bees are highly industrious manufacturers and make much more than they need,” Mark says. Beekeepers typically leave the bottom two boxes for the hive’s own use, but the honey in the top boxes will be harvested once (sometimes twice) a year.

The bees are never allowed to go hungry, so beekeepers often offer sugar water as a supplement. “That’s the closest thing to nectar we can give them,” Mark says. Beekeepers can tell if bees are getting enough to eat in the wild, he says, because they prefer nectar when it is available. If the sugar water is disappearing, it means the bees’ food supply needs to be augmented, and Kevin is happy to comply. “I want them to be happy,” he says, “because if they’re not happy, they leave.” 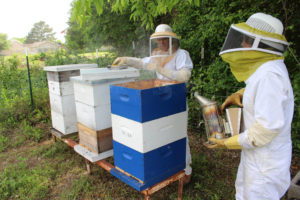 Any time they pop the lid off their bee boxes, the Smiths wear protective equipment. To lessen the threat of aggressive bees, they use a bee smoker (which has a firepot and bellows) to blow smoke around the hive. It has been theorized that the smoke triggers the bees’ response to a fire, prompting them to hoard food in preparation for leaving the hive. In the presence of smoke, Kevin says, “Bees are as calm as ‘hippies on Sixth Street.’”

January is also the month that Walker County Beekeepers begin meeting again, after a hiatus in November and December. The club meets at 7:00 p.m. on the last Thursday of each month from January through October. The organization has two main goals: to educate beekeepers and prospective beekeepers, and to provide community service by removing (and ideally, trapping) bees that have taken up residence in utility meters and other places they are not wanted.

Anyone is welcome at meetings whether they plan to join the club or not. Dues for members are $10 per year, and there are no heavy-handed collection techniques. The club also offers a bee school, which helps beginners learn to keep bees. “We are going to tell you today what you need to be doing tomorrow,” Mark says. 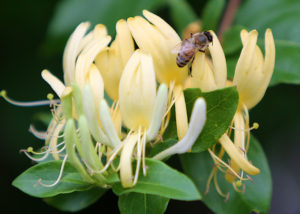 In early spring, bees that were ordered are ready to be installed in their hives. “You have a prepared hive, and you simply dump the bees and queen in the hive,” Josephine says. After a few days, the bees learn that the hive is their new home.

If a beekeeper wants to introduce another strain of bees to the hive, he may only order a new queen. Just as with dogs, cattle or cats, there are different varieties of bees, Mark explains, including Russian, Italian and Hawaiian, and each variety has its own characteristics. For example, Russian bees are more aggressive, but do a good job of protecting themselves from pests. Beekeepers often hope for the best mix of varieties for their hives, but, as in all things bee-related, Mark says, “If you have five beekeepers, you will have six different opinions.” 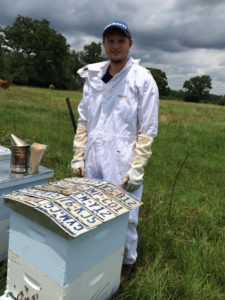 There can only be one queen in a hive, so if a beekeeper plans to introduce a new one, the old one must be identified and eliminated; otherwise, the “wrong one” may win the deadly fight between queens. A queen that is ordered from a commercial beekeeper, Kevin says, arrives in the mail in a small box. Inside, the queen is ensconced in a protective tube sealed with candy. She is placed in the hive inside the tube; the other bees will “get used to her” during the time it takes them to eat through the candy sealant. When the candy is gone, the queen is free to get on with her business of laying eggs.

Sometimes, Mark says, a bee hive will cease being enamored of its queen, possibly because the bees sense she’s not laying enough eggs. In such instances, the bees will make a new queen. It’s easy for a beekeeper to detect this, because of the special pouch that the bees build for the new queen. “A lot of people think the queen controls a hive,” Mark says, “but it’s really the workers. If they think the queen is getting too weak, they will make a new one.” 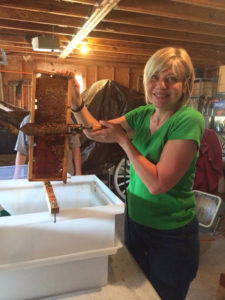 June is a good month for most local beekeepers to harvest their honey, Josephine says, but if it’s not convenient for them, there’s no cause for panic. One of the amazing properties of honey is that it does not spoil, so some beekeepers may wait until later to harvest honey.

Many of the members of Walker County Beekeepers take turns using the club’s honey extractor. Cylindrical and about the size of a 30-gallon trash can, the extractor uses centrifugal force to spin honey out of honeycomb and toward the sides of the cylinder. The honey then drips down through a strainer into food-safe, five-gallon buckets.

On harvesting day, beekeepers open the lids of their bee boxes and lift out the frames. They try to remove as many bees as possible by bumping the frames lightly. Then, they place six frames at a time into the cylinder. “The operation is best performed indoors, away from the bees, if family members don’t object to a stray bee or two inside the house,” Mark says with a grin. 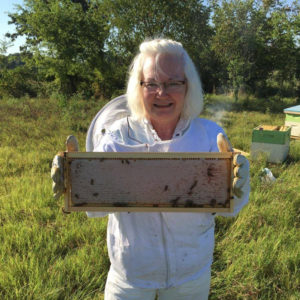 One of the advantages of using this method of honey extraction is that it does not damage the honeycomb. By placing it back in the bee boxes unharmed, the bees are spared many hours of needless work and can get right back to the important task of making more honey. “It puts them weeks ahead,” Mark says.

Local beekeepers are proud of their pure, raw honey. “It’s more expensive, but we think it’s worth it,” Mark says. Depending on the plants the bees feed on, honey has slight variances in color and flavor, he says, and some even has a slight flowery flavor. “You can go out here south of town and the honey might be different, because of what the bees are feeding on,” he says. He notes many people believe eating local honey can help people who suffer from allergies. 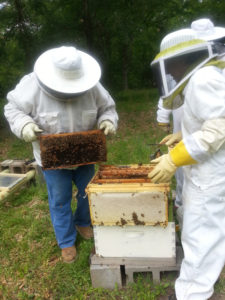 During the fall, beekeepers check on their bees to make sure they are well. “You don’t want to send them into winter with any harmful bugs or mites in the hive,” Josephine says. Generally, beekeepers schedule such inspections during the middle of the day, when many bees have left the hive in search of food. Josephine calls this task “checking on the girls.” She likes to see the presence of brood (babies), and the absence of pests. “You want them healthy and productive,” Kevin says. “You want those bees working.” 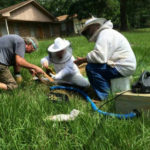 Bees are relatively easy to raise, Mark says, because they are clean and self-policing. They even fight their own predators. “They will surround a bug,” Kevin agrees. “They bat their wings and get the temperature up to 118, and it will kill the bug. There’s only two degrees’ difference in what would kill the bees.” In further praise of bees, he notes that 62 percent of plants are pollenated by bees. Flower and vegetable gardens, in the presence of bees, are more productive. Gardeners take note—bees typically don’t appreciate people disturbing their hives and will protect them “with a vengeance,” Mark says, “But bees that are gathering food from blossoms are rarely aggressive.” 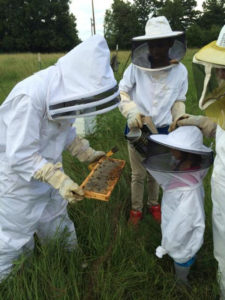 Mark, Kevin, and Josephine are delighted that there has been so much recent interest in beekeeping. Their club has swollen in size to more than 60 members, and guests and new members are always welcome. Many beginning beekeepers have learned that, depending on the types of equipment and hive containers they select, it’s possible to become a beekeeper with only nominal cost. For more information about beekeeping, visit the Walker County Beekeepers Association’s Facebook page, or the Texas Beekeepers Association’s web site at texasbeekeepers.org.