Trending
You are at:Home»Features»Get Away»Gotta Get Away? Natchitoches Christmas Festival
By Karen Altom on October 1, 2013 Get Away

Without a doubt, some of my favorite quotes come from movies, and there’s probably no movie I can quote more from than Steel Magnolias. Everything from Clairee’s, “I love ya more than my luggage” and “Well, you know what they say: if you don’t have anything nice to say about anybody, come sit by me!” to Ouiser’s “I’m not crazy, I’ve just been in a very bad mood for 40 years!” and when speaking of Drum, “He is a boil on the butt of humanity!” There are even days when I can relate to Shelby talking about her mom M’Lynn’s hair-do while visiting Truvy’s beauty shop, “You can’t screw up her hair. Just tease it and make it look like a brown football helmet.” There are many, many more. Some are funny, and some are just plain gut-wrenching, but all are from characters who have qualities of people we know…in a town that seems “real.” Years ago, I found out the quaint little town is indeed very real. It is our neighbor to the east, Natchitoches, Louisiana, and I have had the pleasure to visit numerous times—discovering and exploring both new and old favorites each time I go. 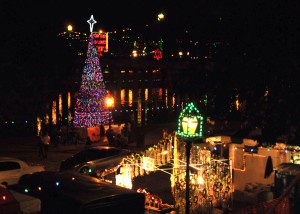 While it might seem a tad early to be discussing Christmas, it’s certainly not too early to begin your plans to visit Natchitoches, Louisiana during the holidays. Last December, in preparation for this article, we traveled the three and a half hours east to enjoy the annual Christmas Festival. As the oldest permanent settlement in the Louisiana Purchase, Natchitoches, pronounced Nack-a-tish, has been a destination for travelers since 1714, and this year the city will host visitors during its 87th annual Christmas Festival. This event is the oldest and longest running community holiday event in North America, second only to Macy’s Thanksgiving Day Parade. And that just barely, according to Iris Harper, who was involved with the festival for 17 years. The two events are only about two to three weeks apart. 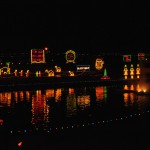 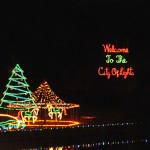 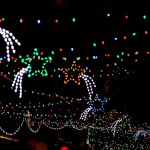 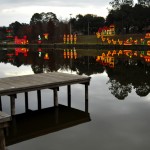 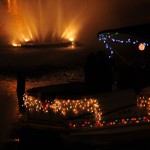 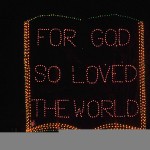 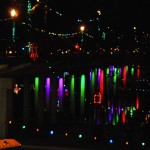 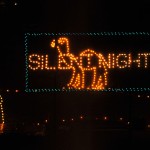 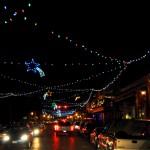 The city of Natchitoches, located on the banks of the Cane River Lake, comes twinkling to life with over 300,000 strung Christmas lights, more than 100 large riverbank set pieces, fireworks most Saturdays in December, and enough Southern hospitality to last the entire Christmas season. Each year, the lights get turned on the Saturday before Thanksgiving, and this year the spectacle is planned for November 23 lasting through early January. (Be sure to check their website ChristmasFestival.com to verify schedules.)

The November 23rd premier will kick off the city’s tricentennial celebration with entertainment, fireworks, Miss Merry Christmas and her Belles, and a Holiday Open House which includes the downtown shops and restaurants staying open late to serve visitors. The lights will be turned on at 6:30 p.m., followed by fireworks over Cane River Lake that flows through the downtown area.

The downtown National Landmark Historic District encompasses blocks of historic homes, churches, museums, historic sites, restaurants, a hotel, bed & breakfasts, and several unique gift shops. Another special treat in the District is the night-time tours of the area by trolley or horse-drawn carriage. The tours stroll through the Historic District and pass many of the Steel Magnolias film sites including The Steel Magnolia House Bed and Breakfast. Built in the 1830’s along the beautiful Cane River in Natchitoches, the house is rich in history and culture. From the unique architecture to its involvement in the Civil War, this home is a piece of Southern history and is primarily known as the home of Drum and M’Lynn Eatenton for the on-site filming of the movie. 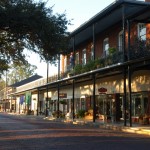 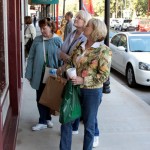 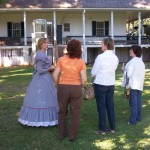 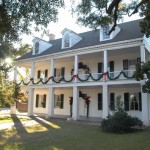 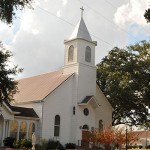 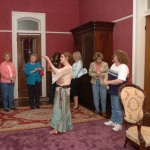 Other interesting areas along Front Street, the brick-lined street that runs parallel to the riverbank, include Kaffie-Frederick General Mercantile, the oldest general store in Louisiana, and The Rocking Horse Toy Store. Walking into each store is like walking into another realm. Kaffie-Frederick offers cast-iron skillets, old-timey toys, Natchitoches souvenirs, and a Christmas Store upstairs, a Christmas gem hidden in the second level of a hardware store. The Christmas store is nothing but Christmas decorations and ornaments. The Rocking Horse is a locally owned and operated toy store – truly a child’s dream store. Whether little Sally or Tommy wants a stuffed animal, wooden train set, zoo animals, or a dollhouse, parents can find almost any Christmas wish in this wonderland of toys. 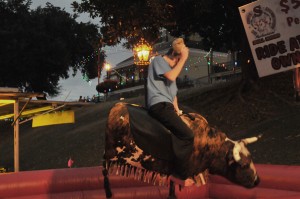 The Festival of Lights in Natchitoches is a community event like none other. This Louisiana community of around 19,000 citizens joins together to celebrate the holidays with 45 days of lights, music, fireworks, food, and shopping. Other special events which take place during the 45 days include arts and crafts shows, jewelry shows, historic home tours, special holiday plantation tours, Christmas musical and theatrical productions, parades, and much more. Live entertainment is available on the downtown riverbank each Saturday in December, except December 28. 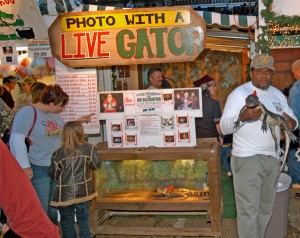 Saturday, December 7th marks the 87th annual Christmas Festival, considered Louisiana’s premiere holiday event. The riverbank and all of downtown become a daylong celebration filled with live musical entertainment, arts, crafts and food vendors and one particular booth like no other. The local Alligator Park opens a booth during the month of December with alligator souvenirs, alligator foods such as alligator on a stick and alligator meat pies, and provides a place where visitors can take a picture with an alligator. The day includes parades and a magnificent fireworks and laser show choreographed to holiday music over a state-of-the-art sound system. The city, the Chamber of Commerce, Main Street, and the city’s merchants all form a cooperative effort to make this festival happen. 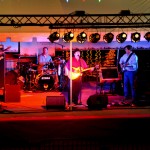 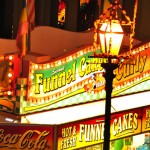 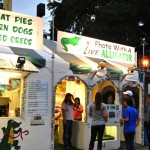 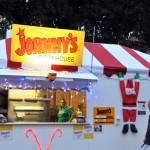 And of course, who can go to Louisiana without thinking of wonderful food? Within an eight block downtown area, there are 10 locally owned and extremely delicious restaurants. Our favorites include The Landing located on Front Street. Our crew had two favorites: the Duck & Grits, which featured marinated medallions of duck breast served on jalapeño and gouda grits, and the Crabcake Hurricane, which served crabcakes stacked with grilled shrimp on hollandaise topped with lump crabmeat.

Dating back to colonial days, Natchitoches is also famous for their meat pies, and none more so than Lasyone’s Meat Pie Restaurant. Listed by Jane and Michael Stern as “One of the 500 Things to Eat Before its too Late,” a local resident confides to us that, “what makes them so special is their pastry. It’s flaky and a family trademarked secret. They are there at the crack of dawn every day. They are still hand closed with a fork, so every one is different. They don’t look perfect, they look homemade…they taste perfect.” Our group braved the crowds to get them, and our source was correct. They do taste perfect!

Located on Church Street, Merci Beaucoup promises an original classic Cajun and American menu. The menu items we heard the most about were the Cajun Potato and the bread pudding. The Cajun Potato is a stuffed potato topped with crawfish étouffée and a jumbo fried shrimp, served with a garden salad and hot French bread. This restaurant is also one of my mom’s favorite places to enjoy bread pudding–their own recipe served warm with a butter vanilla sauce, whipped cream and nutmeg ensures you’ll be counting the days until your return visit.

While in downtown, be sure to stop in at Fort St. Jean Baptiste Historic Site. Founded in 1714 by French Canadian Louis Antoine Juchereau de St. Denis, Natchitoches was discovered on a trade mission to Mexico from Alabama. He had two huts constructed within the village of the Natchitoches Indians on the Red River and left a small detachment there to guard the stores and trade with the inhabitants. This became the first permanent European settlement in the territory, and it was followed in 1716 by the building of a garrison and outpost that would prevent Spanish forces in the province of Texas from advancing across the border of French Louisiane.

This strategic outpost was named for St. Jean Baptiste, a French patron saint, and the fort served as a trade center and military outpost until 1762. Though today’s fort is a reconstruction based on historical records, it gives visitors a glimpse into the 18th century and allows them to experience a bit of colonial history.

If history is your cup of tea, you will thoroughly enjoy the Cane River National Heritage Area, which is known for historic Creole-style plantations and structures, as well as its beautiful drive along the Cane River. Within the heritage area, both Oakland Plantation and 18 acres of Magnolia Plantation outbuildings are located. Oakland has 17 of its original outbuildings still remaining and is a National Bicentennial Farm, one of only two such farms west of the Mississippi River. 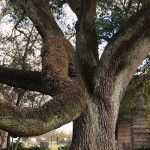 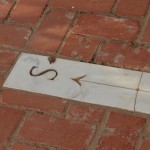 Path Marker Outside the Yucca House 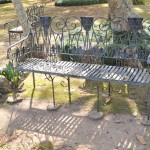 During our trip, we also visited Melrose Plantation. Melrose became a hub of art and education and was a haven for artists and writers after 1884. It has beautiful grounds. Some unique features, such as the Yucca House, make it worth a visit.

Natchitoches, Louisiana offers the perfect Christmas destination for any family looking to get away from home, but still enjoy the Christmas season. A visitor once said, “If you do not catch the Christmas spirit in Natchitoches, then you are not going to catch it.” We have to agree.

Truvy said, “Smile! It increases your face value.” We guarantee a visit to Natchitoches gives you plenty to smile about!