Immediately after graduating from high school, “Joe” enlisted in the U.S. Army. He served for eight years, deploying to Iraq and Afghanistan ve times. Although he enjoyed his duty and liked military service, his wife did not appreciate the hardships she had to endure. To save his marriage, Joe decided to leave the military. Just six months later, his wife, still unhappy,  led for divorce. So, in just a few months, Joe lost his wife and a satisfying career–and with it, his sense of purpose. He was distraught and sought comfort from alcohol. Tragically, he drove under the influence, causing an accident that resulted in another driver’s death. One year after leaving the military, Joe was in a Texas prison, serving time for vehicular manslaughter.

Joe, like many other incarcerated veterans, has found help through ArmatusReintegration Program, a non-pro t organization dedicated to serving “the forgotten veterans.”Eyebrow-Raising8,200 veterans—the great majority of whom were discharged honorably—are currently incarcerated in Texas prisons, says RickPritchard, a U.S. Marine Corps veteran and co-founder, president, and chief executive o cerofArmatus.Statistics suggest that as many as 10 percent of the nation’s prison population are veterans.

Armatus has earned enthusiastic support from the Texas Department of Criminal Justice (TDCJ). “ ey truly, truly care about veterans,” Rick many of our nation’s veterans return home with scars that can’t be seen, but sometimes lead to incarceration,” says Congressman Kevin Brady, as quoted in the Huntsville Item.“Programs like Armatus Reintegration help restore dignity to the life of these veterans and give them a second chance to once again become productive and proud members of our communities.”In addition, Armatus won the Governor’sTexas Department of Criminal Justice Volunteer Service Award (Reentry and Integration Division) earlier this year.

Although Armatus has only been in existence since 2017, it has grown explosively. It began with one class of four veterans at the Ferguson Unit (a class that now has 35 members), but now has classes in 13 Texas units and is expanding into Iowa, Missouri, and Louisiana. e membership ofArmatus, including its board of directors and a growing cadre of volunteers, has expanded to 41 people. Most of these volunteers are veterans themselves. After participating in an extensive training program, volunteers teach classes to incarcerated veterans using the curriculum distributed by Correctional Counseling, Inc. is curriculum has a proven record of success and includes classes in such relevant areas as anger management, job readiness, domestic violence, and post-traumatic stress disorder. 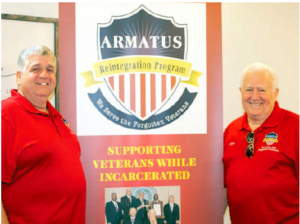 Having served in the marines for eight years, Rick knows firsthand what it’s like to separate from the military. He served as a scout sniper and was promoted meritoriously three times, but he’d always dreamed of becoming a drill instructor. When that didn’t work out, he chose to leave military service. Like many other veterans, he had difficulty adjusting to civilian life. In his new job, his drill-sergeant personality showed up on performance evaluations as a lack of people skills. He missed military life and had anger issues. “It’s hard to adjust,” he says. Fortunately for Rick, he soon met his future wife Kris, and his life took a positive turn.

Feeling an inner nudge to start a non-profit organization, Rick met one morning in the spring of 2017with long-time friend Kent Lucas, an expert in substance abuse, at Denny’sinHuntsville. Over breakfast, the two talked about their areas of expertise. “One thing led to another,” Rick says. Among other things, they discussed the fact that substance abuse is often the common denominator among veterans who commit crimes.

While serving in the armed forces, Rick explains, military personnel are respected. They have responsible jobs, working with state-of-the-art equipment toward a noble goal. “In the military, they had a purpose. When they get out, they lose their purpose, and they lose the camaraderie, ”he says. After separation from the military, veterans also experience a loss of identity. “Nobody cares what they did for their country,” Rick says. If veterans are fortunate enough to land supervisory jobs, they can’t treat civilian employees as robustly as they treated their subordinates in the armed forces.  is loss of respect and identity, combined with the disappearance of their steady paychecks, often causes veterans to develop anger issues.

Furthermore, many veterans enjoyed the surge of adrenaline they got f 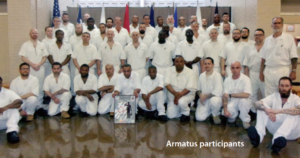 rom dangerous assignments, but such a rush can’t always be replicated legally. In many cases, veterans turn to alcohol, and sometimes illegal drugs.“ they’re looking for something to replace what they had before, ”Rick says. Unfortunately, veterans sometimes commit crimes while under the influence of alcohol or drugs.

By the end of their breakfast meeting, Rick and Kent had hatched the idea of forming a non-profit organization that would serve the state’s forgotten veterans. “On Veterans Day, nobody talks about veterans behind the wire,” Rick says. One of the organization’s key positions is that veteran offenders need special rehabilitation programs, and Rick is pleased that TDCJ also recognizes veterans’ worth. “TDCJ wants them to have special programs because they served their country,” Rick says. “ ey were willing to sign on the dotted line. Less than one percent [of Americans]does that. ey were willing to die for their country.

”Most prison volunteers work through chaplains, Rick says, butArmatusbecamea secular veterans organization so that all incarcerated veterans would be encouraged to participate. Most of the group’s volunteers profess faith in God, however, and Rick andKris, after much brainstorming, chose the name Armatus because it means “the shield and armor of God” in Latin. In fact, two area churches, Fellowship of HuntsvilleChurchand WoodsEdge Community Church, support Armatus. Mike Barber Ministries, as well as two nearby veterans organizations—Marine Corps League Eastex Detachment in Conroe and the American Legion Post 127 in Tomball—have also pledged their support. “Armatus could not fulfill its mission without the support of these excellent groups,” Rick says.

A heart for veterans

Many members of the Armatus Board of Directors, as well as its volunteers, have served in the armed forces. Among those are the pastor of Fellowship of Huntsville Church, C.F. Hazelwood, who is a U.S. Marine Corps veteran, retired Lt. Gen. Steve Hummer, and Dorothy Fulton, who was a U.S. Army nurse in Vietnam. Other veteran volunteers represent a wide range of military duties and ranks, from sergeants to senior officers.

Some volunteers, such as Lloyd Sparks, simply have a heart for veterans.“I grew up in the Vietnam era,” Lloyd says, “and saw how my friends were treated when they came back. 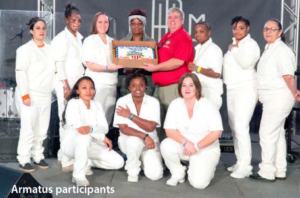 ” HeattendsFellowship of HuntsvilleChurchwith Rick, who approached him about becoming an Armatus volunteer. “I really jumped on it. I love it,” says Lloyd, who is now a board member and the director of operations for Armatus. “Veterans served for me, and now it’s my time to serve for them.

”Armatus invests heavily in volunteers, training them to teach a series of classes to veterans in prison. The organization provides 18 programs per week in two-hour blocks across13 Texas state correctional facilities, and needs more volunteers.“Anybody can be a volunteer as long as they have a heart for veterans,” Rick says, but warns that volunteering with Armatus isn’t for everybody. For that reason, prospective volunteers first shadow Armatus members before committing to become volunteers themselves. “I would rather have 10 quality volunteers than 40 fair-weather volunteers,” Rick says. “They [incarcerated veterans]know who’s for real and who’s not for real.”

A reason to live

Armatus does not enter prison units until invited, but once a warden requests its program, Armatus volunteers begin conducting classes for incarcerated veterans at that unit. The first class teaches veterans how to handle their anger issues. “They don’t realize they have anger issues,” Rick says.“We show them how to have tools in their toolbox to work on that every single day.” Unlike some classes, where lackluster participation is rewarded, veterans must do homework and actively participate each week to pass the course. “You can’t fake it to make it,” Rick says. “Not everybody gets a trophy here.” 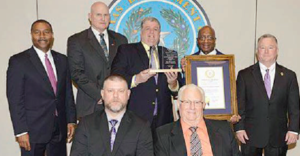 One veteran, who is in prison for the second time, recently told Rick that he might not have become a repeat offender if he’d had the ability to control his anger. “He didn’t have the tools in his toolbox to take care of his anger,” Rick says. “Now he is learning.” Classes also teach cognitive intervention, which Rick denes as “changing your thinking in order to change your actions.” He is confident the classes Armatus provides will reduce recidivism among incarcerated veterans.

Armatus may also have a far more significant impact. Imprisoned veterans are often so despondent, Rick says, they don’t want to go on living; however, Armatus, by bringing caring volunteers to teach worthwhile classes, hopes to give these veterans a reason to live.“e only hope they have,” Rick says, “is they know we are coming in.” For more information about Armatus, visit its website, www.armatusveterans.org.